The staff members in question had been withdrawn from checkpoints in Larne and Belfast following “serious concerns” for safety last week, after threats had been made in the form of crude graffiti in Larne.

Staff were withdrawn by both Mid and East Antrim Borough Council and then Minister for Agriculture Edwin Poots on Monday night, February 1.

The council said the situation had “caused extreme distress and worry” to staff and added it would carry out a risk assessment alongside the Police Service of Northern Ireland (PSNI), Food Standards Agency and DAERA.

Lauding the announcement of the return of staff at the Port of Larne, local Sinn Féin MLA Philip McGuigan said:

I welcome the news that DAERA staff will return to work at the Port of Larne after being withdrawn following reports of threats.

“The safe return of workers is a priority and their safety must be paramount,” the local MLA added. 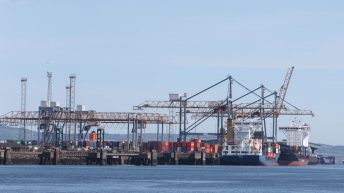