Cow empty rates could be up at almost 10% on farms this year, according to Teagasc Dairy Specialist George Ramsbottom.

“Across the country, the figures are in the range 5-10%. But the problem seems to be most acute in the west and north west.

“The first indicator of difficulties in this regard was the lower than would be expected milk protein levels recorded for the month of April,” he said.

The Teagasc Dairy Specialist said that on some farms this figure was 0.1% below what would normally be anticipated for that time of the year and this would be indicative of animals being under a degree of energy stress.

Grazing conditions were quite poor during that entire month. April is a critical period in dairy cows’ production cycle as it represents the run-up to the breeding season.

“If animals are under energy stress the onset of cyclicity can be delayed.”

Ramsbottom added that empty cows can be handled in one of three ways.

“They can be sold now, stored over the winter and fattened at grass next spring or finished on meals over the coming winter months.

The option taken will depend on the housing facilities on individual farms and the quantities of silage available.

“From a financial perspective there is little difference in the eventual outcome: it’s a zero-sum game,” he said.

Looking ahead, Ramsbottom said that even a 10% empty rate should have no effect on the average herd replacement rates recorded on Irish dairy farms.

“To a point, the fall-off in fertility levels this year was expected. Dairy farmers, in the main, know that a drop in milk protein during the spring period is indicative of an energy imbalance.

But what has caught people by surprise is the fact that milk protein levels remained depressed right through the summer period.

“And this despite the fact that grass growth came back to normal, once we got into May. This is an issue that requires further investigation,” he said. 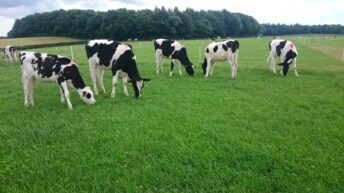 ‘Heifer rearing is a hidden cost on many dairy farms’