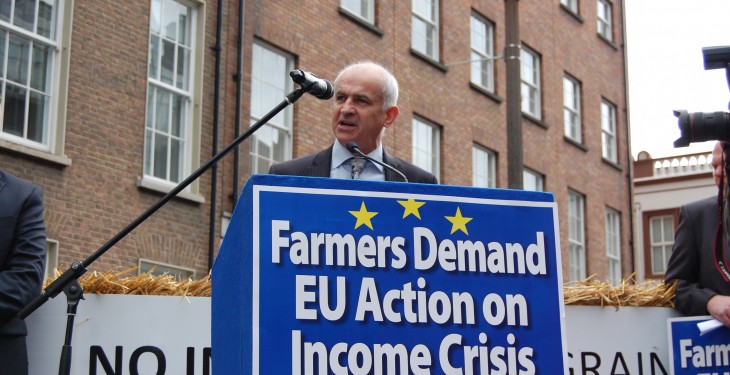 Minister for Agriculture Simon Coveney must shoulder a large amount of the responsibility for the crisis now unfolding within Irish agriculture, according to IFA President Eddie Downey.

“The Minister promised us new market opportunities in the United States and China,” he said.

“But as yet, these have not materialised. And the fault for this lies with the inaction of the Minister and his officials, not the EU. Dublin must now act to rectify these matters by clearing the trading log jams that exist.”

Downey was speaking at today’s 2,000-strong farmer protest in Dublin. He called on the Minister Coveney to act now, rather than wait for the run-up to the next general election.

“All obstacles to trade with China and the US must be removed,” he said.

“Both countries have tremendous potential as destinations for Irish food produce. But our government has failed to convert these prospects into genuine sales opportunities.

“Farmers need action taken on their behalf now. Agriculture has been the very backbone of the Irish economy over recent years. When other sectors came under pressure in the wake of the global downturn, farming and food helped lead the road out of recession.

“The government must fully commit to a proactive investment policy in farming and food.”

Downey also said the power of the supermarkets across the EU must be curbed.

“They are selling food products at below cost of production prices, simply to encourage footfall. EU legislation in this regard must be tightened considerably. Europe must act to protect its farming sectors.

“Consumers should be thanking farmers for every bite of food that they eat. The problem is that Irish farmers do not feel very thanked at the present time. And this goes to the very core of the problems now facing agriculture.”