The farmer in question – Wesley Crooks of Pomeroy Road, Cookstown, Co. Tyrone – pleaded guilty and was fined £1,000, plus a £15 offender levy.

The case arose following a cattle identification inspection of Crooks’s herd by officers from the Department of Agriculture, Environment and Rural Affairs’ (DAERA’s) Welfare and Enforcement Branch.

According to DAERA, breaches of the Cattle Identification Regulations weaken and undermine the cattle traceability system in Northern Ireland, including the integrity of the department’s Animal and Public Health Information System (APHIS).

DAERA has also stated that the current interest in food safety by both Government and consumer groups means it is essential that the Department of Agriculture is clearly seen to be implementing all legislation pertaining to the traceability of livestock.

In other news, detectives in Northern Ireland are appealing for witnesses following the theft of 12 tractors from a property on the Killynure Road, Carryduff, Co. Down.

Chief inspector Jonathan Wilson explained: “The theft was reported to police just after 5:00pm on Thursday, August 9. Officers attended the address and found that entry had been forced into a number of outbuildings.”

As well as the 12 vintage tractors, a low-loader trailer and a power washer were also taken in the raid. 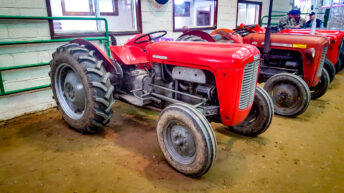 12 tractors stolen from outbuildings in Co. Down…in one heist