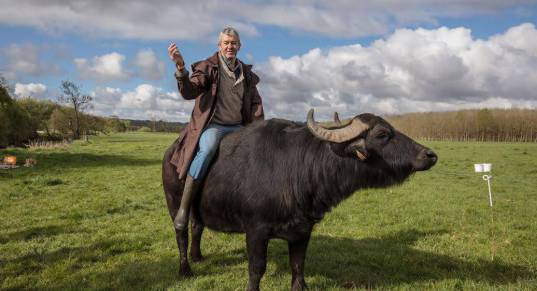 He’s the buffalo soldier – well farmer – who is a native Irish speaker famous for his few words of Italian in the Aldi advert for his cheese.

Johnny Lynch has become somewhat of a celebrity since he dropped dairy farming in favour of milking water buffalo, and making award-winning cheese, including mozzarella.

Being thrown off ‘Black Beauty’, one of his herd, in the hugely popular Italian-inspired TV advert, voiced by Ardal O’Hanlon, has added to his fame.

It’s all been a blur for Lynch who farms 150ac, and leases a further 100ac, at Cill na Martra, near Macroom, Co. Cork.

Things moved very quickly for him, between making the decision to go into buffalo farming in March 2009 and the arrival of 30 buffalo on the farm the following October.

Having enlisted the expertise of cheese maker Sean Ferry, of Desmond and Gabriel cheese, he has reached a point where he is struggling to keep up with supermarket and restaurant demand for his cheese range.

I had 50 Friesians and low milk prices in 2009 caused me to start looking in other directions.

“I thought about changing over to sheep but it would have required a lot of changes in the parlour, and the erection of sheep wire.”

The idea of investing in a herd of buffalo – much dearer stock at €3,000 for a cow – then struck.

“All the other cheeses were being made here, except buffalo,” said Lynch, who identified a market for artisan mozzarella.

“I did a small bit of research. Then I looked at a herd of buffalo in England, but they couldn’t be imported due to bluetongue restrictions, which had closed up a lot of Europe.”

Next stop was northern Italy. Before Lynch knew it, these “highly intelligent, very stubborn” animals were in the yard of the farm he runs with his wife, Geraldine, who also runs a playschool.

Adapting to the change

While the buffalo, which have a life span of 20 to 25 years, had to adjust to significantly lower temperatures and being kept outdoors some of the time, Lynch also had to face “a massive learning curve”.

Buffalo grow at a much slower pace than other stock. “You would be getting 250 kilos carcass weight at two years old whereas if you had a Friesian, it would be 340 kilos at two years,” he said.

“You have to get more for your meat. People shouldn’t compare buffalo with beef, as it’s a much healthier meat.

“We haven’t sold much of it up to now because of the need for consistency of supply.”

The parlour had to be upgraded and a new cheese plant was built in 2015. Lynch puts the overall investment at around €1 million, which was helped greatly by an Udaras na Gaeltachta grant.

Approximately ten people are employed at Macroom Buffalo, and Lynch’s 17-year-old son Kieran helps out with tours. A total of 1.7t of cheese, between mozzarella and ricotta, is produced there at the moment.

The buffalo, which currently number 250, are kept outdoors most of the time, except during spells of wet weather. Their biggest health concern, Lynch said, is prolapse. “In the winter, you can have up to 20% incidence of it, and in the summer, it clears away.”

While the demand is there to increase cheese production substantially, the costs involved in buying more buffalo and additional land are huge. But there has been an “unbelievable” reaction to the Aldi ad, according to Lynch.

He said. “We had the production crew here for two days.

The experience of being involved, alone, was fantastic. I was thrown off the buffalo six or seven times. Everything had to be done about 20 times.

Away from the cameras, life is “nice busy”. Macroom Mozzarella is made from fresh buffalo milk produced on the farm. It is turned into cheese and dispatched on the same day, with a lifespan of 21 days.

“Farming buffalo is completely different. The first couple of years were very tough.

“Now I don’t remember the hard times, such as the prolapse problems; the amount of time the cheese-making process went wrong; and the need to put wire around every tree because the buffalo horns scratches them,” Lynch said.

“It has taken time to develop the cheese, and still, out of the blue, something can go wrong.

“Yesterday the pasteuriser didn’t work, so there was no cheese made that day. We had to work through the night.

“If you haven’t people willing to do that, you’re fighting a losing battle. I’m fortunate to have a good team.”

With the product having achieved BRC global standards, consumers have complete confidence in it, Lynch said.

And what would he say to any farmer considering following in his footsteps? “I’d wish them luck,” he laughed.

“I would tell them to be prepared for four to five very tough years. After that they will be able to afford to get a bit of help.”

Still, one of the downsides of all the attention has been the number of crowds flocking to the farm unannounced.

“It’s grand to have the organised tours, but you could see people wandering around up in the yard. We’ve put up signs and shut gates, but people can still ignore them, which causes a headache for us.”

Although Lynch enjoys his own cheese collection, he dismissed any suggestion that it would be served up to him on demand. “We need to send out every ball we can get,” he said. 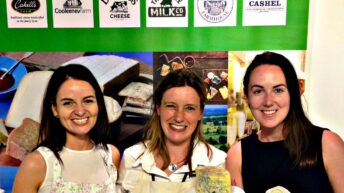