In addition, increases have also been witnessed in the numbers of weanlings, stores and calves shipped from Ireland this year.

More calves have been sold to traditional calf importing markets, such as Holland and Spain, this year. And, as a result, the total number of calves shipped has climbed by 29,100 head or 43.4% on 2016 levels.

Furthermore, export activity involving Italian and Turkish buyers has also had a positive impact. Shipments to both of these markets have led to more Irish weanlings and stores being exported in 2017. 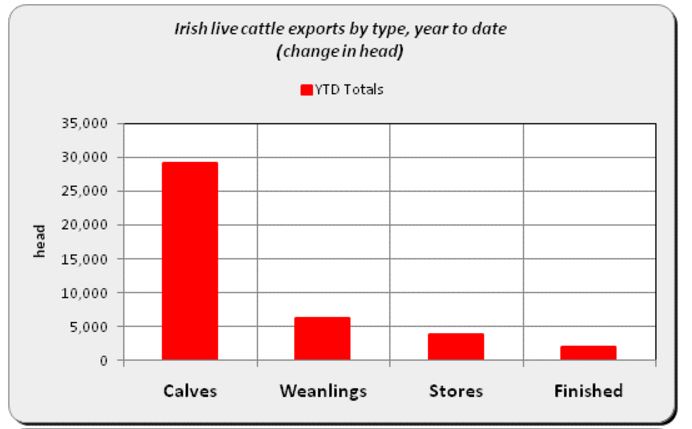 Competition in the market

Despite the increase in the number of finished cattle being shipped from Ireland’s shores, this is only a tiny figure in comparison to the additional number of cattle slaughtered in Irish plants already in 2017.

Official figures show that some 769,043 cattle have been slaughtered in Department of Agriculture-approved beef export plants this year – an increase of 34,255 head on the same period in 2016.

And with 100,000 extra cattle predicted to come on stream over the entire year, finished cattle exports need to step up considerably if they are going to have a major impact on the beef price paid to farmers.

However, it must be noted that the increases seen in calf, weanling and store exports could have a positive impact on the beef market as we move into 2018 and beyond.