Commission confidence will be tested with ABP/Slaney merger

Confidence in the European Commission’s competition authority will be tested after the ABP/Slaney merger was given the green light.

This is according to MEP Mairead McGuiness, who is also the Vice-President of the European Parliament.

Commenting after the announcement, McGuiness said it is hoped that the Commission’s confidence that the development will not lead to a fall off in competition will actually turnout to be the case.

“That remains to be seen and all players will be monitoring developments very carefully for any evidence of anti-competitive practices emerging.

The justification underlying the ruling will not be available for a number of months but I would urge the Commission to do that as soon as possible so that the decision can be fully understood.

McGuiness added that a competitive beef industry at farm and factory level is important.

“Given that Brexit is looming we must ensure the competitiveness and profitability of all players and we must work to ensure that existing markets in the UK remain open and accessible post Brexit,” she said.

The MEP added that she has raised the issue of negative consequences arising from the fall off in competition in the beef and lamb sector with the Commission on several occasions.

Meanwhile, Sinn Fein MEP Matt Carthy has expressed deep concern over the European Commission’s decision to clear the way for the Slaney/ABP merger.

“In its submission to the European Commission, ABP, Fane Valley and Slaney Foods claimed that this merger was ‘needed’ in order for them to complete on intensely competitive international markets.

At no point in their submission did they make reference to or try to justify the effect this merger would have, on the Irish market.

Carthy added that it is small farmers in Ireland who will feel the squeeze of this market concentration and they will hardly be consoled by ABP/Slaney’s ‘strategic economic rational’.

“The problem is at home, where the deal will result in 30% control over the country’s cattle kill, and 40% of the country’s lamb kill.

The speed at which this decision was taken is also worrying, coming only five weeks after official notification to the Commission.

‘Given the extensive efforts and research put into this issue by farming organisations, including a 132 page Independent Report commissioned by the IFA, five weeks hardly seems long enough to assess the nuances of the market situation,” he said. 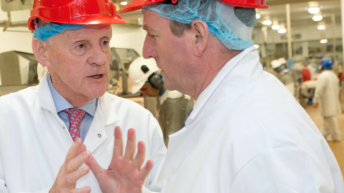