It has recently been revealed that ChemChina’s $43 billion takeover of Swiss Company Syngenta has now been officially completed.

ChemChina originally placed its bid on the Swiss company in early 2016, following on from two failed bids by Monsanto in the previous year. Since then, the transaction has had to receive approval from the relevant competition authorities.

As the transaction with the Chinese state-owned company was confirmed, Syngenta outlined its new ambitions and priorities going forward.

The company aims to profitably grow market share through organic growth and collaborations, and is considering targeted acquisitions – with a focus on seeds.

The goal is to strengthen the company’s leadership position in crop protection and to become an ambitious number three in seeds, Syngenta added.

It is hoped that further expansion in emerging markets, notably China, will be one of the key drivers of the next phase of growth for the company.

The stepping up of digital agriculture offers, as well as ongoing investment in new technologies to increase crop yields – while reducing CO2 emissions and preserving water resources are also expected to play a major role.

The Chairman of ChemChina, Ren Jianxin, reaffirmed that the Swiss company’s operational independence will be maintained and that the existing management team will continue to run the business.

“Together with its board, management and all its employees, we will work for the benefit of growers, to enhance food security and fight famine around the world – based on principles of technological leadership, environmental safety and sustainability,” he said.

Meanwhile, the transaction has been described as historic by the Vice Chairman of Syngenta and Lead Independent Director, Michel Demare, for many reasons.

“Not only is it the largest acquisition ever made by a Chinese company, but also it is a deal focused on growth. All our stakeholders are benefiting from this change of ownership.

Jobs have been safeguarded and farmers will continue to have a choice and enjoy the benefits of our investments in technology.

“Syngenta will continue to be headquartered and to pay taxes in Switzerland, with major manufacturing and R&D (Research and Development) sites in the country.

“Syngenta remains a standalone company, with a new owner which has a long-term vision for our industry and will invest accordingly,” Demare said.

The company is set to maintain the “highest corporate governance standards” with four independent directors on the board. Together, ChemChina and Syngenta will make a significant contribution to global food security, he added.

‘A vital role in the food chain’

Syngenta plays a vital role in the food chain to safely feed the world and take care of the planet, the company’s CEO, Erik Fyrwald, explained.

Our ambition is to be the most collaborative and trusted team in agriculture, providing leading seeds and crop protection innovations to enhance the prosperity of farmers – wherever they are.

“With ChemChina we have a stable new owner which will help us to achieve this ambition. At the same time we will sustain our focus on productivity and on improving the customer experience.

“We are excited by the global prospects and particularly those in China – where we will utilise and build on our technology and know-how to promote the highest agriculture, food safety and environmental standards, as well as to increase productivity,” Fyrwald concluded. 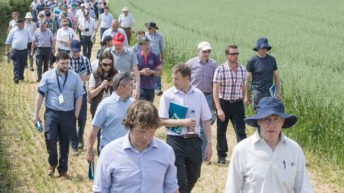