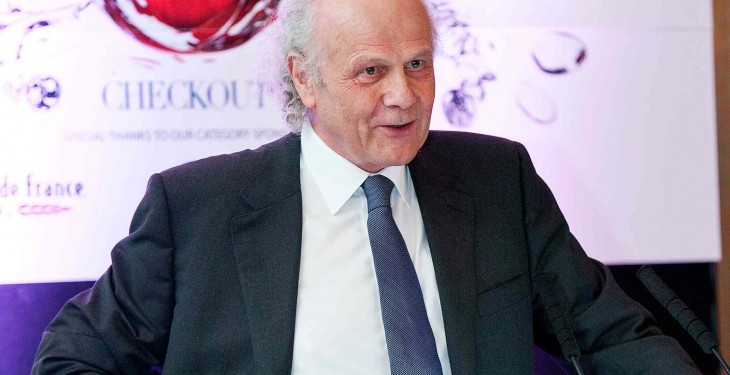 Ronnie Wilson, the founder of Monaghan Mushrooms, was presented with a special Lifetime Achievement Award at the 2013 Checkout Best in Fresh Awards at the Four Seasons Hotel, which took place this week.

The 65-year-old was honoured for more than three decades (founded in 1981) at the helm of what is now Europe’s largest mushroom producer, employing more than 4,000 employees in six countries, and boasting a turnover of €500m per annum. The group is headquartered in Tyholland, Co Monaghan, where the company currently has 900 employees.

Monaghan Mushrooms total spend in the Irish economy is more than €100m per annum and the company has also spent €46m in the past five years in bolstering its assets here, including the recent development of a state-of-the-art mushroom farm and research and development facility.

“Checkout Magazine is proud to honour Ronnie Wilson, one of the true unsung heroes of the Irish agri-food industry,” said Stephen Wynne-Jones, editor, Checkout. “While the export potential of our food sector has only recently come into the spotlight, Ronnie and his team have blazed a trail for agri-food exports for three decades, building a dynamic industry that Monaghan – and Ireland – can be proud of.”

A biography of Ronnie Wilson can be downloaded  here.

The Checkout Best in Fresh Awards is the only annual event to honour best practice in the sale of fresh produce, with retailers of all sizes and formats recognised for their high standards in this area. The Awards are open to all retail groups and independent retailers, including multiples, symbols, discounters and non-affiliated stores.

In addition, there were also two special awards for fresh produce excellence by a retail group, with SuperValu winning the Best Multiple/Group Retailer award, and ADM Londis taking the award for Best Fresh Logistics/Supply Chain.

A total of 65 awards were presented on the day across 22 categories.

The judges said: “Scally’s SuperValu Clonakilty is simply peerless. Eugene Scally has created something very special in Cork, and judging by the product knowledge and passion of the staff, the array of artisan products available, and the innovations this store continues to develop, it just gets better and better.”

The judges said: “When we visited Ryan’s SuperValu Grange, at 12pm on a Saturday, this store was packed, but everything was absolutely perfect – the presentation, the array of produce, the atmosphere. It won this category last year, and it has managed, somehow, to have got even better since.”

The judges said: “There’s something about the formula at Donnybrook Fair Stillorgan that just makes you want to buy more and more, which can only be a good thing – an amazing array of meat, seafood, cheese; even a takeaway noodle bar. Whatever it is they’re doing here, they’re doing it right.”

The judges said: “Spar Express Junction 14 Mayfield is a really popular motorway stop off that is far more than a roadside café – the presentation on the fruit and veg and bakery is as good as any mainstream supermarket, and the deli and hot food to go sections are always busy; a sign of a top class operation.”

The judges said: “As soon as you walk into Tigh Mhic Dhonnchadha Costcutter Express, you know it’s a winner. The meat counter is particularly impressive for a store of its size, but factoring in the excellent fish and fruit and veg sections as well makes this store hard to beat.”

The judges said: “Field’s SuperValu Skibbereen is synonymous with its bakery department, but the creativity and attention to detail here is echoed throughout the store, whether in the in-store café, meat section, seafood section, or just its focus on value for money. A really enjoyable place to shop.”

The judges said: “Morton’s is no stranger to these awards, and if you take one look at its fruit and veg display, you can understand why. That attention to detail echoes right throughout the store, right up to the flower display at the checkout.”

The judges said: “The culture of quality and attention to detail that SuperValu fosters in its stores is not just the finest in Ireland, but arguably exceeds that of most of Europe. In addition, the entrepreneurial spirit of its independent store owners – from Carndonagh to Castletownbere – is indicative of the efforts made by the group to achieve optimum standards, particularly when it comes to fresh.”

The judges said: “In the two years since it launched a new online ordering platform, ISIS, and following a €20 million investment in a new chilled distribution warehouse,

ADM Londis has increased considerably the range of fresh products it can offer its retailers, and improved its supply chain efficiencies significantly. It’s been one of the biggest supply chain initiatives undertaken by any retail group in the past year.”

The judges said: “Condron’s SuperValu has one of the best bakery sections in the country, and the value for money here is echoed right throughout the store – a huge array of well-priced meat, fish, fruit and veg. Clear pricing, clear quality – it ticks all the boxes.”

The judges said: “The Food Store is one of those destination stores you want to come back to again and again. The presentation is excellent, the range is superb – it could easily be a contender in any number of categories.”

The judges said: “The refurb of Caulfield’s SuperValu Bandon took just eight weeks to complete, but it has brought this store forward several years in terms of how it presents and markets fresh produce. Really bright and appealing all the way through; a joy to visit.”

Ardkeen Quality Food Store – ‘Take Ours Back To Yours’

The judges said: “Ardkeen Quality Food Store has long been synonymous with championing local producers, and with ‘Take Ours Back To Yours’ it has created an umbrella brand to be proud of. It’s an added-value concept other retailers should make note of.”

The judges said: “You can’t walk five yards down an aisle at Pettitt’s SuperValu St Aidan’s, without encountering an array of products from a local supplier, supported with company information and tasting notes. It’s a tour of the best suppliers in the south east – without having to leave the supermarket.”

The judges said: “McInerney’s SuperValu Loughrea is a store not afraid to experiment with its deli counter; with four different types of coleslaw, a sushi selection, a tapas selection, a self service Indian bar and a range of flavoured oils and vinegars. Really impressive.”

The judges said: “The James Whelan Butchers at Avoca Monsktown is leading the way in terms of turning butchery into an artform. It’s all about the cut, with everything prepared right in front of you behind glass walls. The added-value is exceptional.”

The judges said “Caviston’s is an outstanding retail store that all other store operators should go and study. In fish, it has such a strong focus on range, provenance and seasonality that it would be difficult for any retailer to beat its fresh fish counter.”

The judges said: “The first thing you see when you enter McCarthy’s Eurospar is the impressive bakery space. The smell of fresh baked bread follows you as you make your way around the store, and implores you to come back again and again.”

The judges said: “Maxol Mace Wilton is a busy forecourt that people come to for far more than just the petrol; a really impressive hot food to go offering, particularly its hot sandwich range… delicious!”

The judges said: “Tesco has really embraced the dairy concept, creating a segmented dairy space in its Bloomfield store that is based around the changing needs of the shopper. It’s a new, innovative approach that deserves to be commended.”