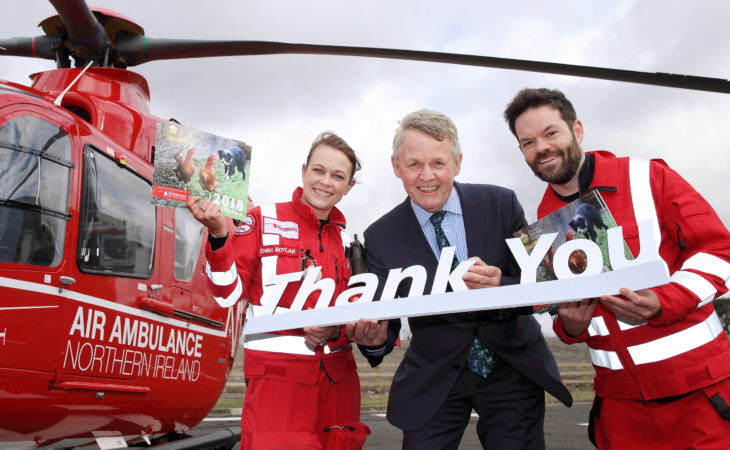 The Ulster Farmers’ Union (UFU) has raised over £21,000 for Air Ambulance NI at its annual dinner – a figure boosted by £10,000 made through sales of the union’s centenary charity calendar.

UFU president Barclay Bell said he has been “blown away” by the support from farmers and the industry for the life-saving charity.

Bell added his gratitude to those who had supported the calendar; particularly the UFU, Fane Valley and Countryside Services staff who had helped to sell it.

“The air ambulance has been operational since July and already I have heard many stories from the farming community about how it has helped loved ones,” he said.

“It is a reminder that farms are busy work places and can sometimes be dangerous. Having access to an air ambulance means emergency help can get to a farm incident quicker – ultimately saving lives.”

The helicopter’s first call-out saw 11-year-old Conor McMullan rescued after his head was crushed against a wall by a reversing tractor on his family’s farm in Castlewellan, Co. Down.

The rescue happened days before the service had even officially launched. The team had been out on a training exercise at the time and were able to get to the farm in rural Co. Down in just minutes, saving his life.

The air ambulance charity needs to raise at least £2.5 million a year to remain operational.

If you would like help the UFU with its target to raise £100,000 for Air Ambulance NI, contact UFU HQ to make a donation.

Man airlifted to hospital after bull attack at Leitrim mart