Cattle slaughterings at the highest point in the decoupled-payment era

In line with industry predictions, the number of cattle slaughtered in Ireland exceeded the 1.7 million head mark in 2017.

Furthermore, the additional supplies recorded in 2017 brought the yearly Irish beef kill to its highest point since 2003, when over 1.77 million animals were slaughtered in Irish plants.

Last year’s increase was predominately driven by jumps in steer and heifer slaughterings, which rose by 54,104 head (8.6%) and 33,722 head (8%) respectively. Furthermore, an additional 15,456 cows were slaughtered in Ireland last year as opposed to the year earlier.

After the Christmas break, factories are now back slaughtering and purchasing cattle. For the most part, the trade has left off from where it left before Christmas.

Cow prices remain relatively stable this week and farmers selling P-grade cows can expect to be offered 315-330c/kg. Buyers are starting negotiations with farmers for O-grade and R-grade cows at 330c/kg and 350c/kg respectively. Click here for a detailed breakdown of prices 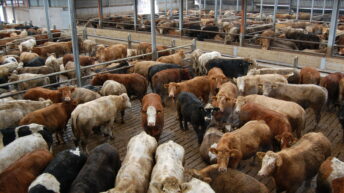