Classic corner: Cut straight to the chase; it’s time for a TW 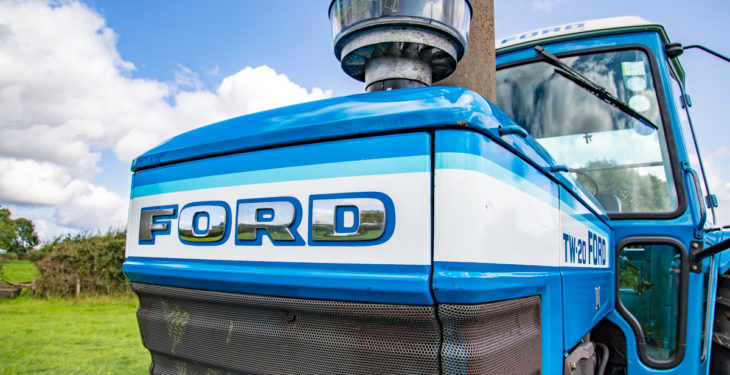 Strictly speaking the Ford TW series was not the company’s first foray into the 4WD market; that honour belongs to the Steiger-built FW-30, which arrived on UK soils in 1977.

Alas, the FW-30 was simply too big for Irish farms.

At the time, the FWs were massive prairie-busting cultivator tugs; they owed their presence on this side of the pond to sky-high grain prices and, perhaps, the vanity of some big tillage farmers – as much as anything else.

Something far more sensible was required for mainstream growers, who were obliged to convert their own 2WD tractors with a Schindler front-axle kit, or turn to the handsomely-priced County range – if they wanted a Ford with all its wheels driven.

To address this demand, Ford eventually took the existing 8700 and 9700 models and, with a few other adjustments, graced the front ends with a ZF axle in 1979. Thus was born the TW series; it had at its heart the same power-plant throughout its life. 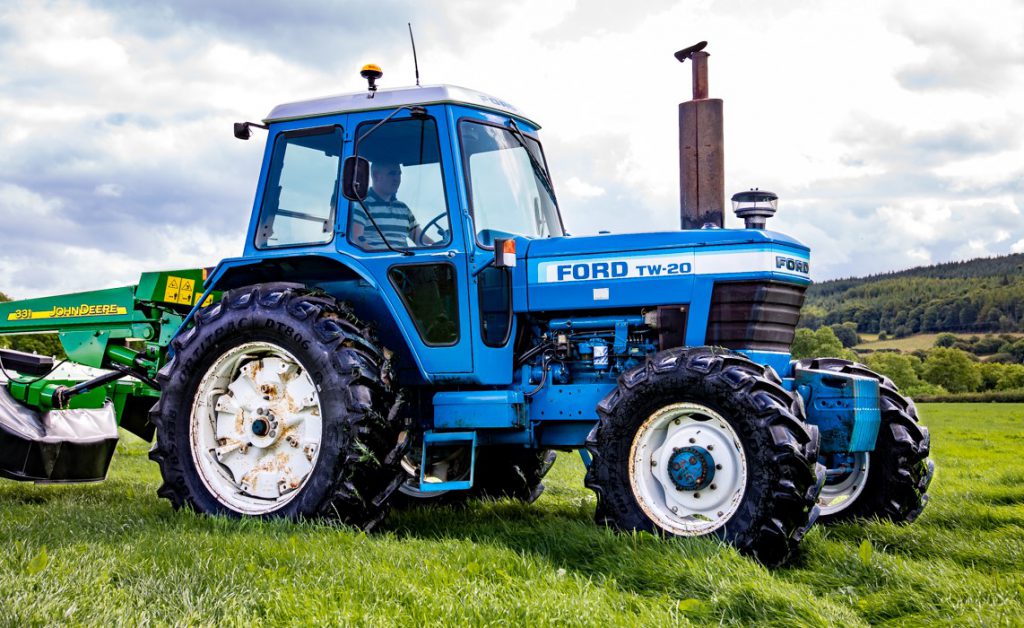 The transmission was also retained for the TWs; it was a non-synchronised box with 16 forward and four reverse gears which, somewhat unbelievably, also remained as standard for the next decade. 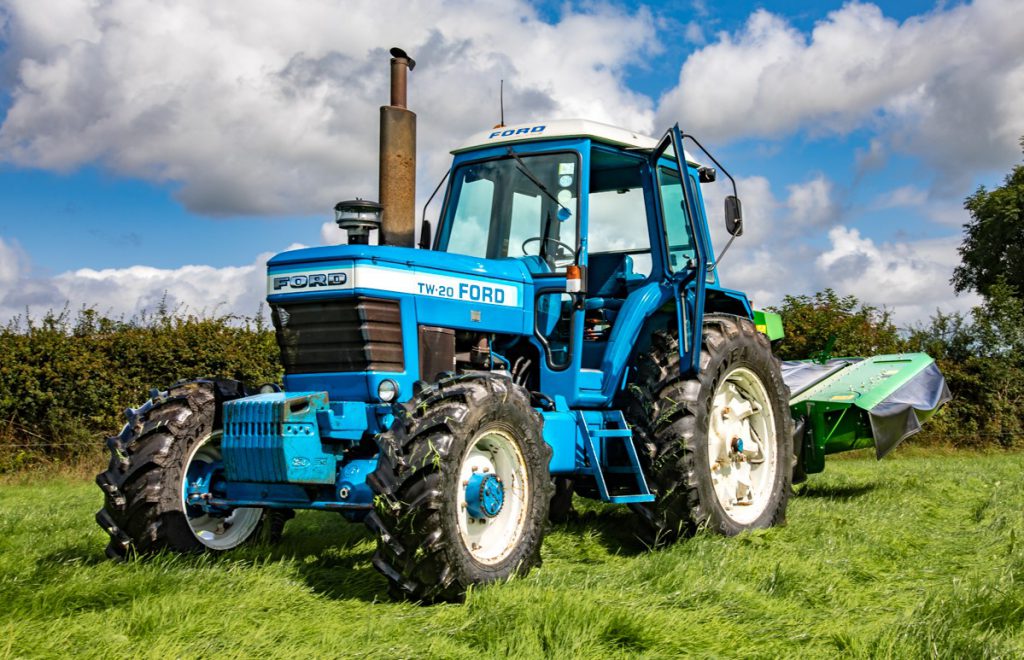 Initially Ford offered three versions of the TW. The first, the 123hp TW-10 had the naturally-aspirated, straight-six engine; the second, the TW-20, had a turbo fitted which boosted output to 146hp; while the third was equipped with a turbo, intercooler and extra diesel tank – all the better to keep its 177 horses well supped.

The TWs quickly put Ford back on the list of suppliers of machines to be aspired to; it proved immensely popular with operators and owners.

They were big machines for the time, which were styled to look as if they were constantly on the lookout for a patch of heavy clay to play in.

European operators rarely spared them, hanging as big a plough as possible on the back whereas in the US they were often paired with trailed implements.

Here in Ireland, they were also appreciated – both as a work-horse and a rather magnificent machine in their own right. The power available at the PTO left them sought after by contractors with a forage harvester to run, while drivers found them an impressive beast – leaving an indelible mark upon many who found themselves behind the wheel. 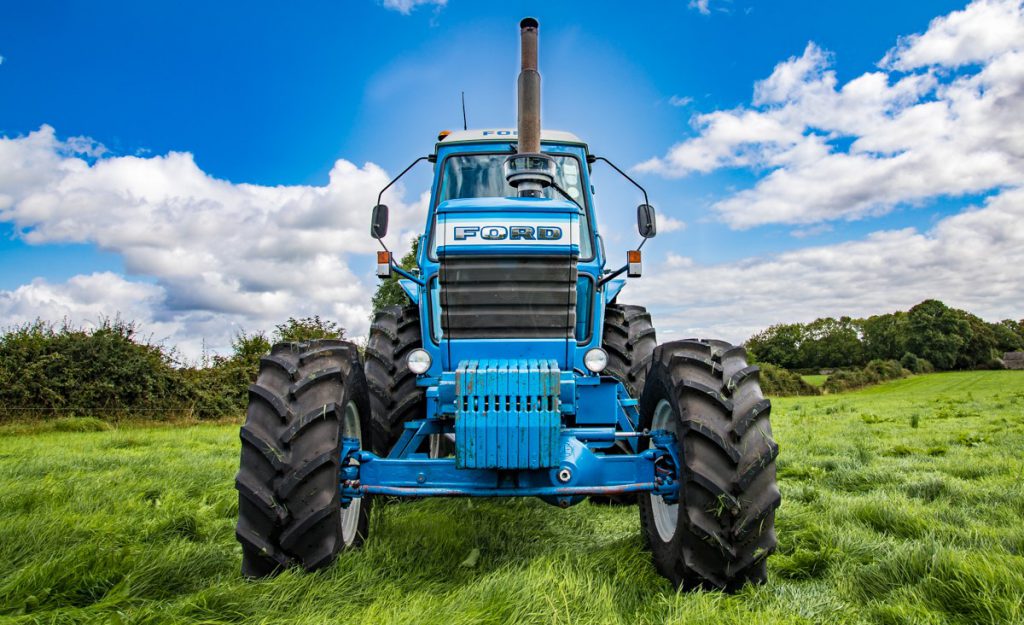 David Hannon of Cappoquin, Co. Waterford, was one such fellow. In his youth, he had driven a TW-20 for a local contractor – an experience he has not forgotten. He promised himself that one day he would own one himself. 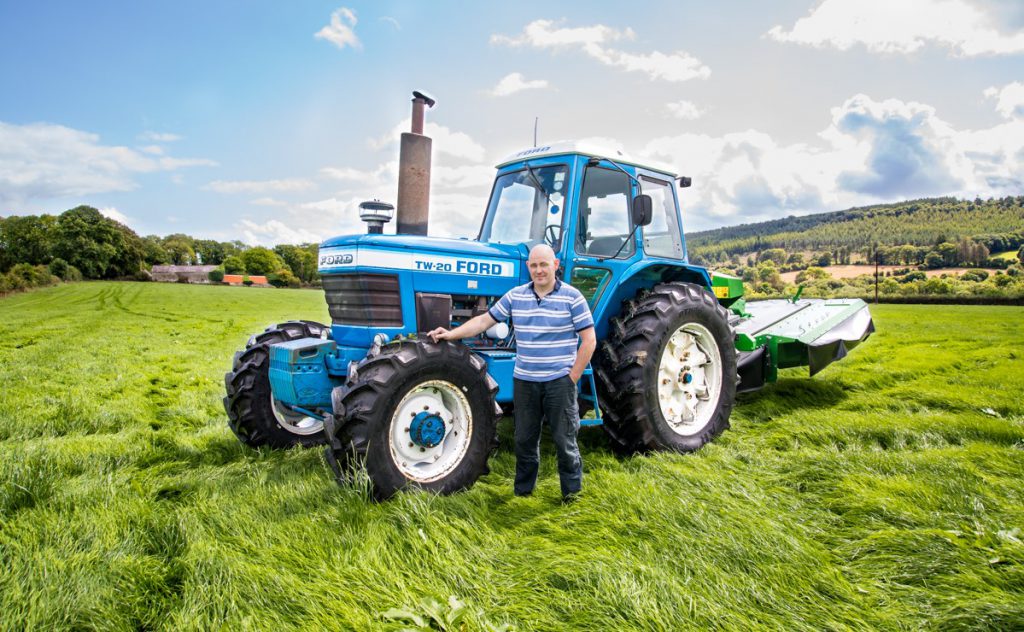 That day came three years ago when he read of an original machine in excellent condition for sale in the UK. It was with JR Firby Ltd of York, who had it on the forecourt for €20,000, having purchased it at a Cheffins Cambridge sale the year before.

At the time it had just 3,350 hours on the clock; it was in far better condition than it had any right to be for a 30-year-old tractor. 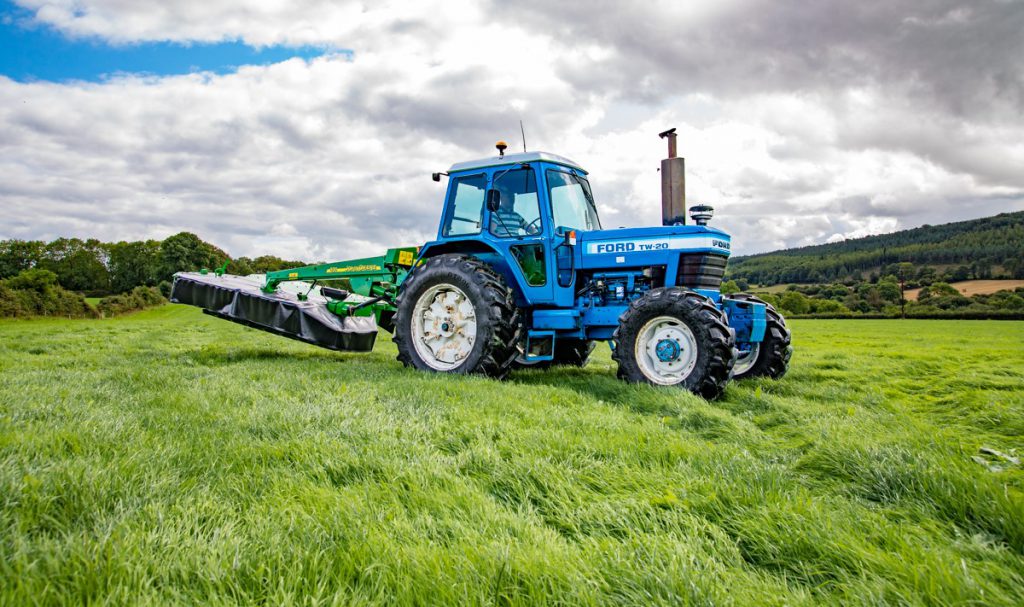 Although the tractor had originally been supplied to its single previous owner by Ernest Doe and Sons of Malden, Essex, the customer was actually based near Bury St. Edmunds in Suffolk. Here it had enjoyed a none-too-strenuous life, with light cultivations and road transport being its main duties.

The soils of the area tend to be sands or chalk loams, while the local sugar beet factory processing campaign lasts only a few months – hardly the most stressful life for a tractor of this calibre.

Even so, it was not completely without fault and David treated it to some tender loving care on its arrival in Ireland. New Goodyear tyres were fitted all round and the temperature gauge was replaced, along with a thorough service (which saw all the filters and fluids being renewed). 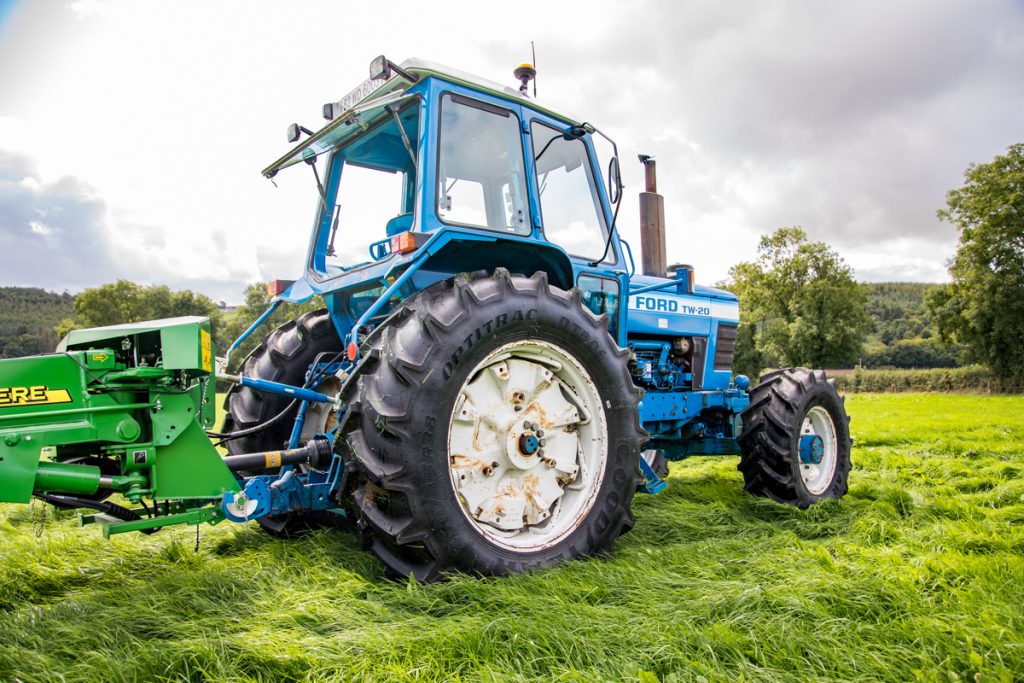 A slight leak of oil on the block suggested that it might be wise to check the head gasket; it was duly found to be tired with age, but not totally blown. The head was skimmed and the gasket replaced with a much more modern type that should last the lifetime of the engine.

David has every intention of keeping it in such excellent condition. In the belief that the best medicine for any tractor is hard work he gives it a few days’ exercise with a local contractor each silage season, although it gets hopelessly left behind by its more modern counterparts.

In addition, he takes it to local charity tractor runs and working days where it has drawn many an admiring inspection from others who remember these Fords from the days when anything above 100hp would cause a stir amongst the locals. 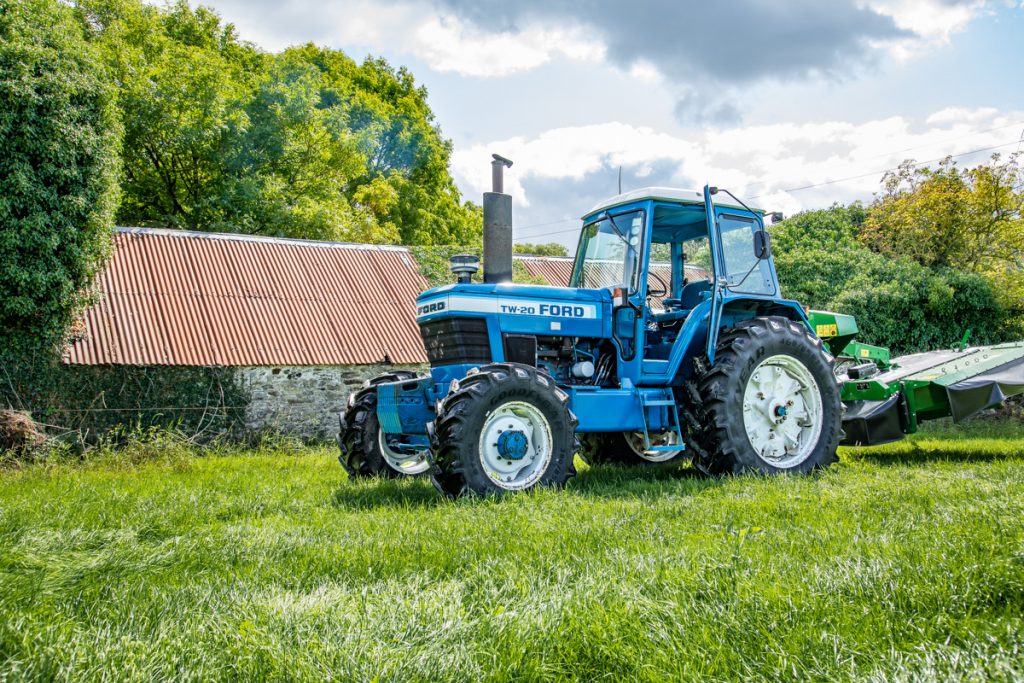 “Above all else it is the sound of them,” enthused David. “There is nothing like it out there nowadays.”

He has a point; the TWs probably best represent the apex of purely mechanical tractor development, before electronics crept in.

They had a presence and purpose that was raw-edged and immediate.

The driver was left completely to his own devices in getting the best from the machine. 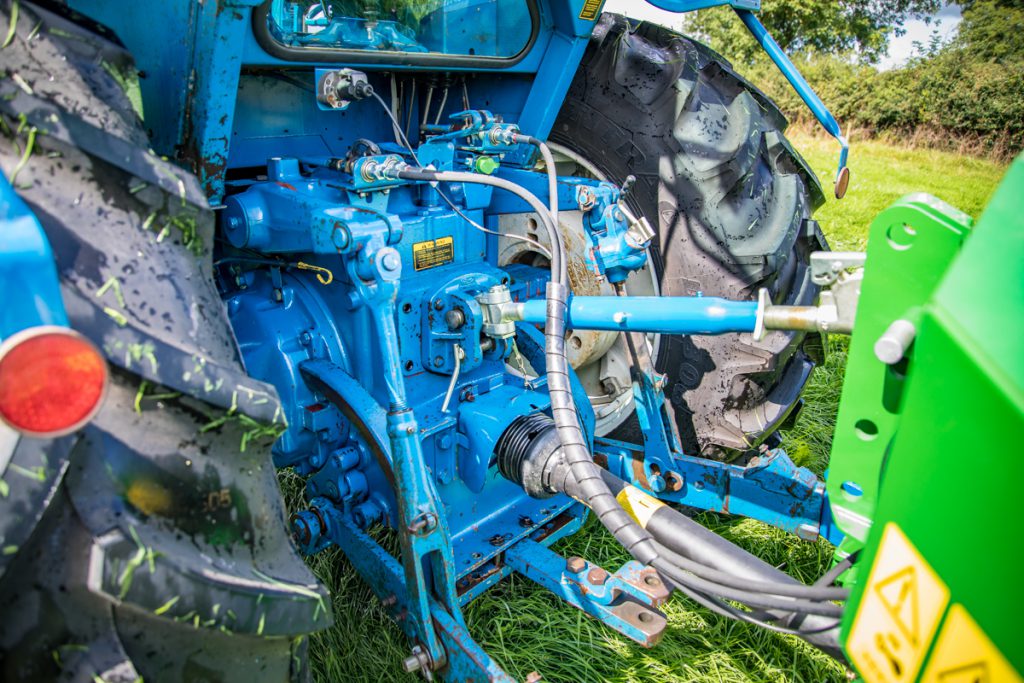 We shall probably never see such responsibility being passed to the operator again – a great shame for it is hugely satisfying to do a job well through one’s own efforts. It is no surprise that so many who have worked these tractors in the past share David’s enthusiasm. 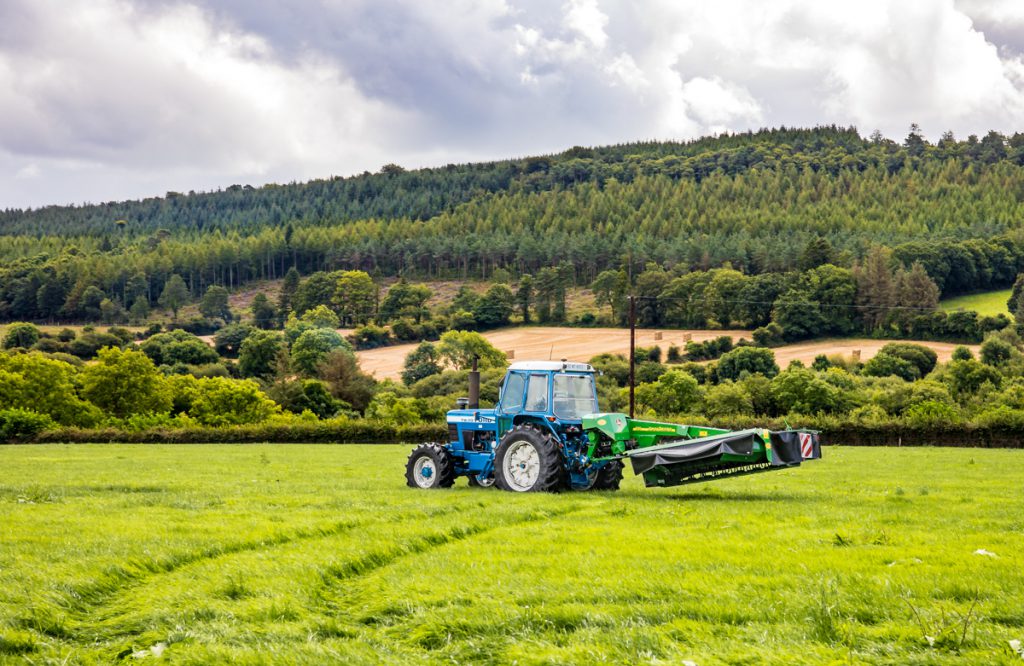 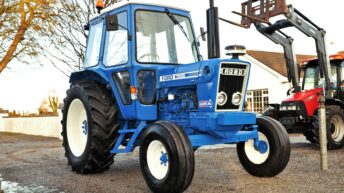