In recent days, mart managers across Ireland have noted an increase in activity around the sale rings. While entry numbers fall away, the increase in buying activity has generated higher prices.

There seems to be a new sense of confidence ringside, with mart managers noting the return of farmer buyers in the market for store animals.

Industry experts expect the price of beef to rise over the next couple of months, with Ireland vying to throw its hat into the Chinese ring and compete with big beef export players – which include Australia, Argentina, Brazil, New Zealand and Uruguay.

This – coupled with a decrease in the backlog of cattle available for slaughter – has brought farmers back to the sale rings.

The increase in prices has been dominated by store cattle, but there has also been a welcome increase in price for the plainer, dairy-cross animals. Generally speaking, bullock, heifer and weanling prices have all moved in a positive direction.

Some 871 animals went under the hammer at Carnew Mart on Saturday last, November 23.

In addition, 80 calves were reported to be in demand, with exporters in the market for Friesian bulls.

Looking at the heifer trade, beef lots made €530-850 over and continental store heifers fetched €380-640 over. Early-maturing Hereford and Angus heifers made €260-430 along with the weight.

Headford Mart held its weekly cattle sale on Saturday last, November 23. On the day, in-calf heifer prices were reported to be a “flying trade”, with the top price reaching €1,825.

Castlerea Mart held its weekly sale on Thursday last, November 21, with prices reported to be gradually rising for all stock.

Brendan Egan, the mart manager, said: “The heifer ring reported a good clearance, with breeding heifers in strong demand, while – in the weanling rings – prices were strong again.

Furthermore, cows with calves at foot made €970-1,620/unit, with springers selling from €550/head to €1,370/head. In addition, a number of dry cows also went under the hammer at the Roscommon-based venue.

220 bullock were on sale on Monday, November 18. The trade was reported to be better for quality stores. 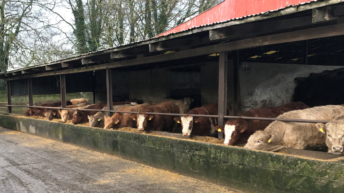 Beef trade: ‘As you were’ for base quotes