The mart trade has picked up a gear since the start of the year, with mart managers noting, firstly, that the number of cattle has increased week-on-week and, secondly, that there has been an increase in buyer activity around the ring.

With this, a glimmer of optimism has grasped the trade, with many categories of cattle recording an improvement in price.

Mart managers have also highlighted that the number of cows coming on stream has also increased, with the trade best described as steady, with better prices commanded by continental cull cows.

Both beef and store bullocks and heifers have been reported to be in demand, with lighter lots also witnessing more interest from buyers at the ringside.

With regard to weanlings, the numbers on offer are relatively low, which has resulted in stronger prices being paid for both bulls and heifers.

David Quinn, the mart manager, said: “The trade was very strong for all classes of stock.”

Looking at prices achieved by Hereford and Angus bulls, Quinn said that these lots sold at €140-280/head, while heifer lots made €120-240/head.

Beef and forward bullocks were reported to sell from €600 with the weight up to €980 over, with a noticeable demand for the heavier lots. Continental lots – weighing over 500kg – sold for €2.00-2.20/kg, with Driver noting that exceptional lots made upwards of €1,250.

Moving to heifers, beef and forward types sold for €630-980 over, while store Aberdeen Angus and Hereford lots made €2.00-2.40/kg, with forward continental heifers selling up to €2.70/kg.

Forward store continental cows were reported to be a lively trade, with older, poorer-quality cows making up to €250 over and heavier lots making €650 with the weight.

Castlerea Mart held its weekly cattle sale on Thursday last, January 16. Again, a large entry of stock was reported, with farmer demand reported to have increased, with more positivity witnessed around the ring.

Brendan Egan, the mart manager, said: “There was much more positivity witnessed in all three rings, with good demand on offer for all classes of stock.

Furthermore, cows with calves at foot made up to €1,400/unit, with springers selling from €865/head to €1,520/head. In addition, a number of dry cows also went under the hammer at the Roscommon-based venue. 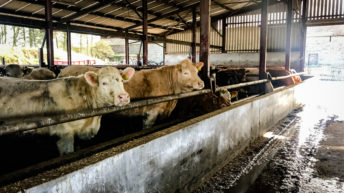 Beef trade: Factories managing to keep a cap on base quotes