CAP briefing: Debate in parliament is ‘too concentrated’ on sustainability

The European People’s Party says the debate in the European Parliament on the Common Agricultural Policy (CAP) is “too concentrated” on sustainability and the environment.

Speaking ahead of the vote in the parliament’s plenary session next week, MEP Herbert Dorfmann, the EPP coordinator at the parliament’s agriculture committee, said in a briefing today (Thursday, October 15) that CAP needs a reform, as “some things are far from perfect” currently, with a regret of his being that the debate “is very much concentrated on the environmental action of this policy”.

He said that the policy “needs a balance” between food security on one side and sustainability on the other.

He added that he sometimes has the “impression if I hear debates that some think the farmers are working for free because it’s a hobby”, so that farming “needs to remain profitable or to become profitable”.

“If you see the figures for how much farmers earn in Europe compared to [outside], the situation is not the best one,” he said.

If you want farmers jumping in, farming needs to be profitable. Otherwise they will go – this is the worst situation not only for landscape, but for food.

It was also said in the briefing that the focus on percentage of CAP that is allocated to environmental measures needs to be of less, and what it means for farmers should be more.

Focus needs to be less on the 30%, more on what it means for farmers

He also spoke about the EPP’s position paper on CAP reform, published last month, outlining its position on what it wants the policy to achieve post-2020, with a ‘Global Environmental Budget’ and 40% of CAP being used for climate measures being key focuses. The EPP says in the paper:

“The ‘green architecture’ debate is of great interest to society and is highly contentious. It is therefore important to find a balance between societal demands, a high level of ambition for the climate and the environment as well as defending farmers’ interests.

“The Global Environmental Budget (GEB) would have such a balancing effect in this debate.

“As an innovative approach, this concept did not figure in the votes in the committee of 2019. A national strategic plan will provide a coherent whole, comprising interventions and funding under both pillars.

“Deciding, through the GEB, upon a single percentage for the overall CAP Strategic Plan dedicated to environmental and climate objectives, is a logical solution.”

According to the EPP, member states would be able to use the GEB to contribute to the “achievement of the environmental and climate objectives in a flexible way”.

“The GEB is an opportunity to reach a compromise on the financial allocation of environmental and climate-related measures – an aspect that will play a role in the public evaluation of the agricultural reform.

“Another advantage of the GEB is that the way in which the national envelope is distributed across the two pillars becomes irrelevant, since each member state must represent the same overall percentage across both pillars.

The Basic Income Support for Sustainability (BISS) shall not be part of the GEB, except for the 5% of arable land where non-productive features or areas where no pesticides and fertilisers are used are obligatory under conditionality [the former ecological focus areas].

“We support a figure of 30% for the GEB. To avoid the danger of ’emptying the second pillar’, at least 30% of Pillar 2 expenditure must be dedicated to climate and the environment.

“This would also eliminate the need for a mandatory allocation in percentage terms for first pillar interventions. The financial transfer between the two pillars also plays an important role. Money that is transferred from Pillar 1 and Pillar 2 remains free of co-financing obligations.”

The EPP supports that 40% of the CAP should be used for climate measures, and that the principles of the Farm to Fork strategy “have to be assessed carefully”. 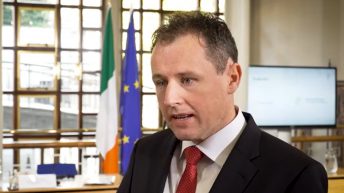