CAP 2020: More responsibility for member states, but power still lies with the commission 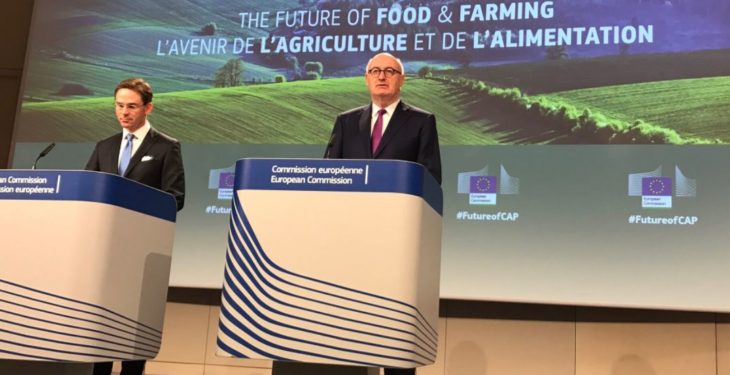 This morning a number of proposals were revealed in the EU’s much-anticipated White Paper that will guide Common Agricultural Policy (CAP) reform post-2020.

‘The Future of Food and Farming‘ was published by the EU Commissioner for Agriculture, Phil Hogan.

During a press conference on the publication, Commissioner Hogan underlined the fact that there would be an increased responsibility on individual member states to meet objectives and targets set out by the EU Commission.

He added that there would be a greater emphasis placed on simplifying this policy going forward – something which he indicated has been top of his political agenda since he became commissioner – as the complexity of the current structure has been widely criticised by various stakeholders.

Commenting on the proposals, he said: “The CAP has always remained a common policy, applied across all EU countries. This will continue to be the guiding principle behind the policy in the future.”

Supporting farmers and developing wider rural communities will also remain as the two pillars of the CAP under the new proposals.

As a result of the new proposals, individual member states will be required to design CAP strategic plans to meet EU objectives. But the commission must first approve these plans to ensure they will be sufficient to meet the targets and will review the progress being made by each member state on annual basis. It will also hold the power to step in where appropriate.

The introduction of this new implementation method for the CAP was described as a “bold step” by Commissioner Hogan.

During the press conference, he reiterated the fact that a “one-size-fits-all approach” in relation to the CAP is unrealistic going forward and that a more “tailor-made” approach is going to be employed going forward.

A one-size-fits-all approach is inappropriate in the context of ‘Greening’. Member states should define practices most appropriate to their regional context.

It is hoped that these new proposals will provide member states with the flexibility to employ a variety of measures and tools that suit farmers, farming practices and climatic conditions in specific regions in order to meet EU objectives.

Each member state will have to prove that the EU funding is having the desired result and is managed in a sound way, and be accountable for ensuring that the common destination is reached, according to the commission.

The scrutiny of the national/regional plans will guarantee the coherence of the internal market and a level playing field for European farmers, it added.

The commissioner said that financial aspects of the CAP would be discussed at a later date but did note that the fair distribution of payments is a continuing issue.

Tools such as compulsory payment caps, digressive payments and ensuring that active farmers receive supports were also highlighted as possibilities going forward by the commissioner.

The new proposals also highlight the ambition for a more coherent approach to tackling climate change and to protecting the environment at farm level and the wider rural community. A greater emphasis is also set to be placed on encouraging young people to take up farming.