Maam Cross mart manager to be laid to rest

Maam Cross mart manager Eoin Burke is set to be laid to rest today, after he sadly passed away following a car crash last weekend.

The mart manager and well-known hotelier, died after he was involved in a single car crash at approximately 1:30pm on Saturday, November 25, at Carrick East, Cornamona, Co. Galway.

Having been the only occupant in the car; he was pronounced dead at the scene and his body was removed to University Hospital Galway, so a post mortem examination could take place.

Alongside his family, Eoin Burke ran Peacockes Hotel in Maam Cross – which is located on the main Galway to Clifden road. The hotel remains closed until tomorrow; the Monday sale in the nearby Maam Cross mart was cancelled in respect of the funeral.

He was also a member of Clonbur GAA club and previously acted as chairman, as well as holding other executive roles down through the years.


The 53-year-old is survived by his wife Brid and children Hannah, Paddy, Muiread and Jean – as well as his parents, brothers, sisters and wider family. 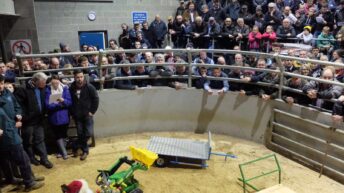