Bull beef market continues to struggle across the EU

The bull beef market continues to struggle across the European Union and the shorter-term outlook does not look promising, according to the AHDB (the organisation for British beef and Lamb).

On the continent, the AHDB reports that the young bull market is still suffering from lower demand for prime cuts and strong competition from higher supplies of dairy cow beef.

With regards to steers, the fall in the value of Sterling is reducing prices in euro terms in the UK, which in turn is having an impact on prices in Ireland.

However, total male cattle slaughterings in the EU so far this year have actually been down on 2015 levels, it shows.

For the young bull market, the average EU R3 price in 2016 to late November was 3% lower compared to the same period last year.

Meanwhile, figures show that French, German and Polish prices have fallen by a similar amount, which has contrasted with a small rise in prices in Italy and Spain.

But R3 young bull prices have fallen by 6% in Ireland and 13% in the UK when compared with 2015 figures.

In 2016 the EU steer market has been much weaker with the R3 price down 9% through to late November, according to the AHDB.

Normally the EU steer price enjoys a considerable price premium over that of young bulls, last year it averaged €60/100kg deadweight through to October, the AHDB reports.

Advertisement
In contrast, by early November this year, the steer premium over the young bull price was closer to €10/100kg deadweight, figures show.

The AHDB reports that despite UK steer prices in 2016 having been well below levels seen last year in euro terms the UK still has the highest weighting in the calculation of the EU steer price.

The R3 price in Ireland and France also fell this year by 5% and 7% respectively.

In Ireland and the UK the number of male cattle sent to slaughter had increased in the first eight months of the year, compared to 2015 levels, figure show.

These increases are contrasted with reductions in two other key male cattle producers, Germany and France.

Therefore, male cattle slaughterings in the first eight months of 2016 were down 1% on a year earlier.

The results of the EU Commission beef forecast group of mid-November indicate a decline of 3% in the overall EU male cattle price for 2016 as a whole, so reversing the rise of 2015, it says.

Any recovery in 2017 is expected to be only marginal, led by movements in key major young bull beef producers, in Germany, Italy and Poland.

The organisation expects steer prices to fall further in Ireland as the Irish beef industry will struggle against much higher production and a less competitive position on key export markets, led by the UK. 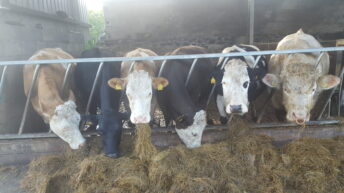