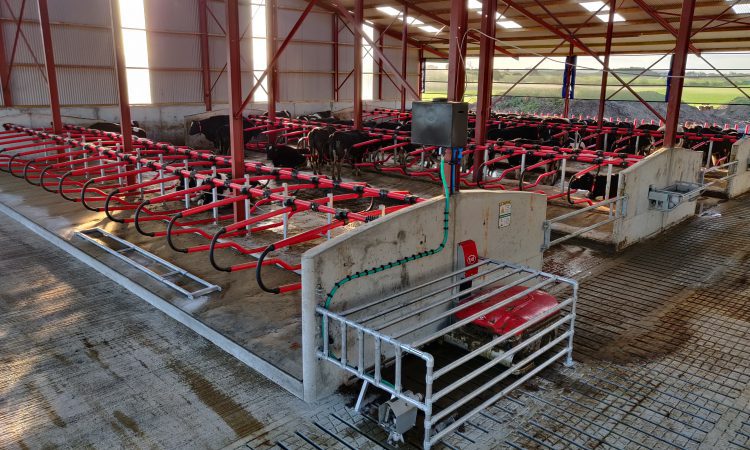 Farming in Portlaoise, Co. Laois, Liam Delaney and his father Jim have recently gone down the route of dairy farming.

The father-and-son duo originally ran a herd of 80 suckler cows, with all progeny brought through to slaughter.

However, over the last 18 months, unhappy with the return from the beef enterprise, Liam felt it was time to change systems.

Speaking to AgriLand, he said: “I was very disappointed and sad to leave behind the herd of cows that we had built up since 1988. My father and I have a great passion for beef farming, but at the moment it is a vulnerable business to be in and the returns are just not there to make it viable.

“Between the two of us, we were not able to generate a sustainable income – with the suckler enterprise – and the decision, although very reluctantly, was made to go down the route of milking cows.”

The duo are milking 69 British Friesian cows that were sourced for them by Progressive Genetics. The milking platform consists of 38ac, with a further 40ac of land being used to sow crops.

The heifer calves are going to be kept as replacements, while the bulls will be finished for the factory at 20 months-of-age.

In general, Liam was very happy with how the calving season went for him, with all of the cows calving down over a six-week period.

The only downside was that his father, Jim, had an accident on the farm just when calving was about to commence; however, he is on the road to recovery.

Therefore, to help Liam through the busy calving period, his mother and a friend of his were on hand to assist him a couple of days a week.

There are still a couple of suckler cows on the farm, with the majority of them having calved down last autumn.

The plan is to finish the remaining cows and send them to the factory.

One aspect of the design that Liam was adamant about, was to tie in an existing round-roof hay shed that was in place on the farm into the new development.

Like many farms that convert over, there are often existing sheds that can be used. In this case, the existing shed was converted into a large calving area located beside the newly-built separation cubicles.

The steel for the shed was sourced from a company based in Co. Dublin.

Liam and his father were able to do a lot of the excavation work on the site themselves. The shed itself, including the concrete and steelwork, was completed by two friends of the Delaney family.

The entire inside of the unit was designed by the Lely team in Mullingar, Co. Westmeath.

There are a lot of features in the shed which include: a large calving area; a dry cow area; two feeding passageways; interchangeable gates; a Lely drafting system; 102 cubicles; a Lely Astronaut A5 milking system; and a Lely Discovery Collector.

The cubicles are 1.5m wide and 2.25m long. The passageway along the feed barrier is 4.5m wide, while the internal passageways in between each row of cubicles are 3m wide.

There are two feeding passageways, which allow Liam to feed his cows at either side of the new build.

The 102 cubicles installed in the new unit and the feeding barriers were sourced from EASYFIX.

There are 12 cubicles that are designated for the dry cow/drafting area. If Liam wishes to separate any cows, that might be sick and need to be treated, they can be drafted away from the rest of the herd after milking – into the isolation area.

The cows can also be drafted automatically through a footbath if needs be.

The other 90 cubicles are in the main area of the shed. All the cubicles have mats fitted onto them – to aid with cow comfort.

Located beside the separation area is an office and a dairy which holds the milk tank and a room where the central unit is located. Liam opted to install a 10,000L bulk and 10T meal bin.

Beside the drafting area is a calving area, which is made up of the old hayshed and lean-to. According to Liam, he can “fit up to 20 cows in this area at ease”.

To aid with cow flow, grooved slats were incorporated into the design, where the robot is installed, to provide additional grip for the cows.

Installed in the unit is a Lely Discovery Collector, which collects animal faeces in the shed and deposits it down the slats.

A docking station was fitted into the new build for the Discovery Collector to recharge and refill with water.

The concrete work is already in place if Liam wishes to install a second robot; however, at the moment, he is unsure whether or not he will go ahead and purchase a second one.

He also installed windbreakers along the feeding barriers, as there was a draught coming through the shed. Moreover, incorporated into the design are roof lights, which further aid the amount of daylight entering the shed.

One Lely Astronaut A5 has been installed in the new unit. When cows go through the robot to be milked they can either be let back on to the slatted tank, in front of the robot, where they will have access to the cubicles or to the milking platform to get access to grass or they can be guided down a corridor between the two robot rooms.

Liam added: “The only way we could go down the route of milking cows was if we installed a robot. I just wouldn’t have the time to put clusters on the cows and spend up to three hours in a milking pit every day.”

My wife works a good distance away from the home house, so I have to look after the kids as well as running the beef, tillage and the new dairy enterprise – so my time is well and truly taken up as it is.

After going around and seeing other dairy farms, we were convinced that a robot was the way to go. The information you can get from it about the cows is great.

“It’s only been in operation for a few weeks now, but so far so good; I have had no issues with it. The only problem, especially the first few days after calving, was getting the cows used to going in and out of the robot.

“However, in fairness, they took to it well; I’d say 95% of the cows will go into the robot unassisted now, whereas, a few of them still need to be given that extra encouragement by myself to go and get milked.”

Currently, the cows are producing approximately 20L of milk. Another feature of the robotic-milking system that Liam was impressed with was the data you can get from the computer about each quarter of the udder, which can tell him what cows are “producing the goods and which ones aren’t”.

It also gives him an indication of the somatic cell count (SCC) of the herd, which he says is “another added bonus”.

The build began in April 2019 and it was completed in January of this year, just in time for the calving season.

Commenting on the new build, Liam said: “Look, it’s a big investment but I am glad that I decided to go ahead and do it last year.

The whole coronavirus pandemic has put everything on the backburner and the chances of me going ahead and getting the job done this year would have been very slim.

“I was very lucky to get it finished when I did, because if I wasn’t milking and I had to rely on the suckler enterprise for an income – especially now with the way the beef prices are – I would be very worried about how I would be able to support my family and feed my suckler cows.

“Since we made the decision to go milking cows, the beef trade has progressively got worse, so I think our decision to go down this route, so far, has been justified.” 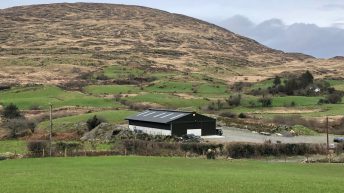