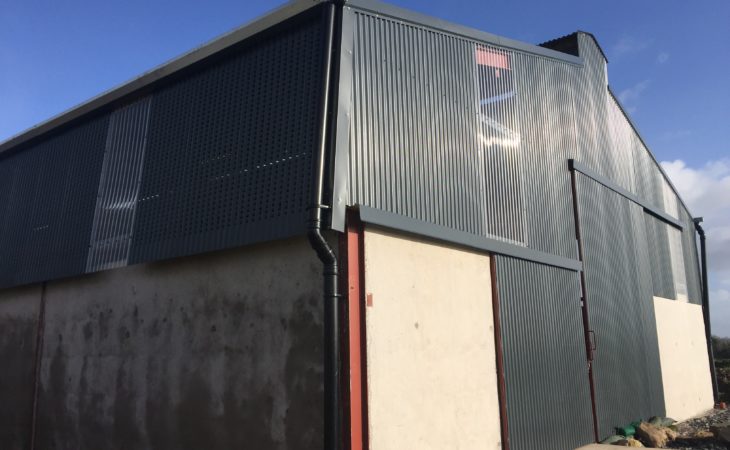 Farming in Drumhillock, Co. Monaghan, Dermot Sherry and his family run a herd of 130 Holstein cows on 60ha of land.

Recently, Dermot opened the gates of his farm to a healthy crowd as part of a LacPatrick calf event. After operating a split-calving system for years, he has moved away from autumn calving.

Previously, about 33% of the herd calved from September on. In 2016, the start of calving was delayed until November and calving only commenced on St. Stephen’s Day in 2017.

Next year, the plan is to start calving the cows in January.

With more cows calving during the first two months of the year, the Monaghan-based farmer had to focus on the housing facilities on his farm.

In light of this, a new calf shed was constructed during the back end of 2017; it encompasses an area for newborn calves, group pens, a hygiene area and cubicles for weaned calves.

“Whether it was spring calving or autumn calving, I needed facilities quickly. We built a parlour six years ago and we knocked a cubicle house that we were using for calves. I was using different sheds and two big hutches over the last six years,” he explained.

“This was brutally labour intensive. I needed a calf house and it needed to go onto the farm some way or another.”

Dermot designed the shed himself and outlined that choosing a site to build the development was the most important point taken into consideration.

“I would say that the location of the build is the biggest issue on any farm. There are a lot of factors that come into play. These include: prevailing wind direction; draughts; sun; and shelter.

The reason I picked this site is because there are doors in each of the group pens and – when open – the calves can go out to the paddock to the east side of the shed.

“The wind and rain comes from the south-west. The individual pens are located to the north-west corner of the shed, which is away from any of these elements,” he added.

The six-bay shed is 6.3m high at the apex. It is 28.6m long and 12.5m wide. The concrete walls of the shed stand at 2.4m. There are four sliding doors located at either end of the unit.

The floors are sloped in the pens to a channel, which will catch any run-off and keep the straw bed dry. These channels are piped to a slatted tank which is also located in the shed. 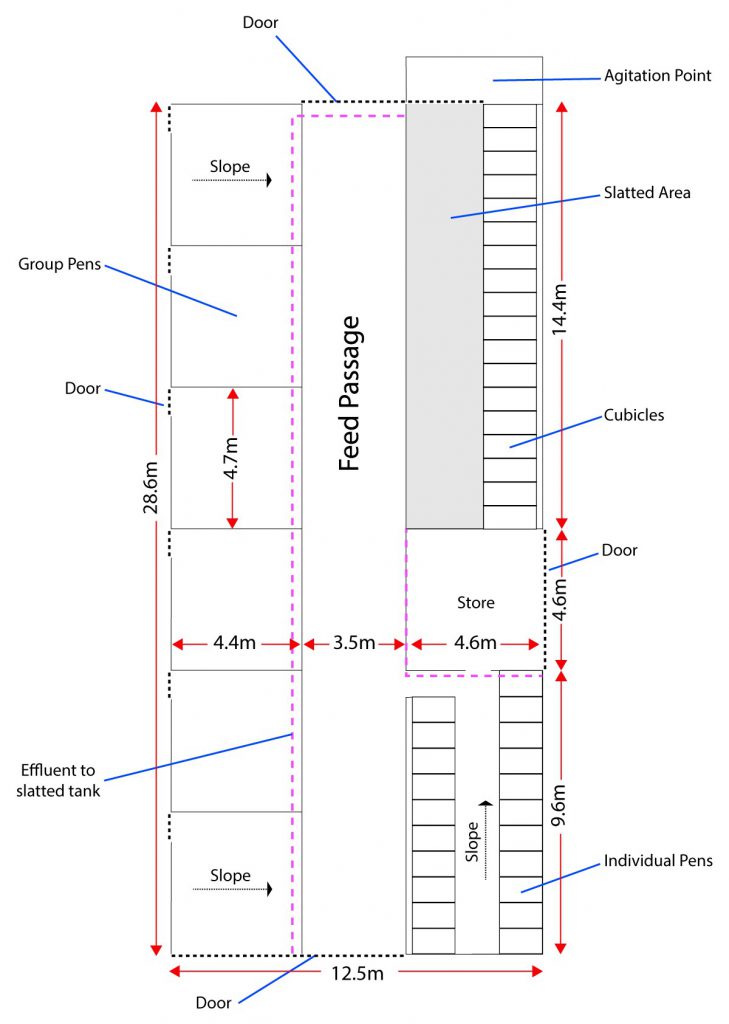 Six group pens are located along the east side of the shed. These pens have the capacity to hold eight calves at a time. The pens are bedded with wood chip and straw. Water drinkers are also located in every pen.

Each pen is equipped with head-locking gates. The reason for this, Dermot says, is very simple. Dermot feeds his calves on teats for the first week of life before moving them on to buckets.

“I bucket feed all the calves once a day. In my opinion, if I feed a batch of calves in a trough or with teats, some calves will miss out. One calf could get 2.5L, while the other could get 3.5L. When the calves are locked in, the bucket is put in front of them and each calf gets its own milk.

“I also dehorn and vaccinate them in the pens and it comes in handy for these jobs. It even makes bedding the pens in the morning a lot easier; the calves aren’t beating you around the pen,” he explained. 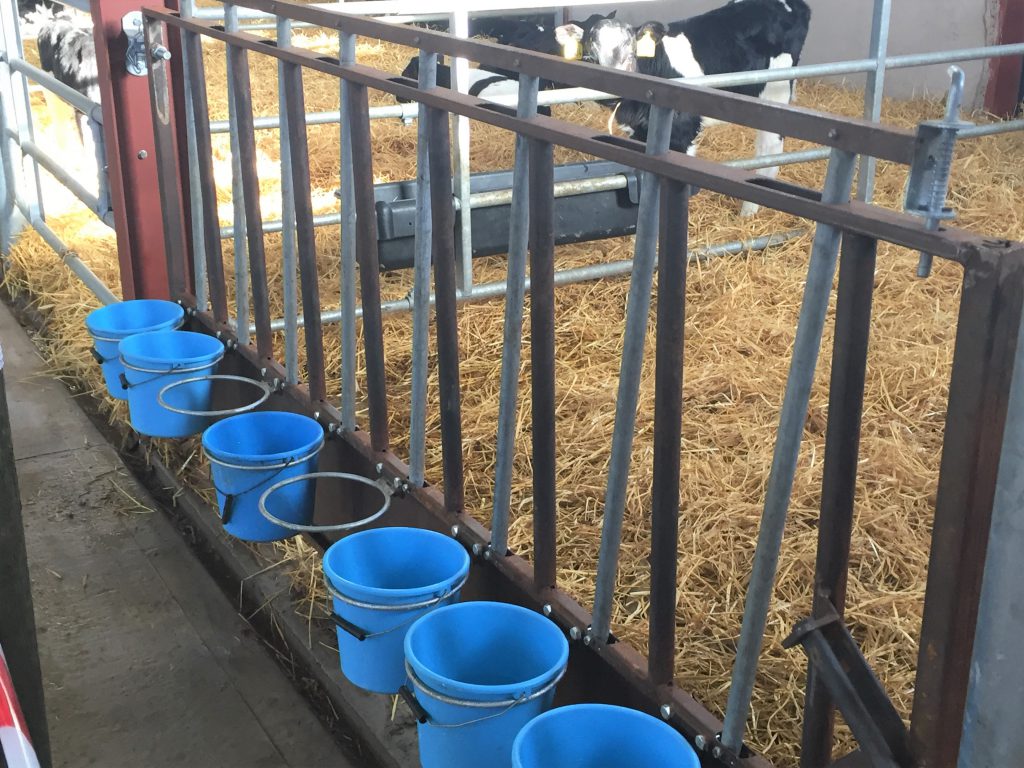 The shed features an apex roof for ventilation. Dermot also placed mesh down either side of this canopy to stop pests and birds entering the house.

Dermot outlined that ventilation was one of the biggest problems he had in previous sheds. To counteract this, timbers were installed on the wall underneath the vent sheeting. This provides a gap between the wall and the bottom of the sheet. 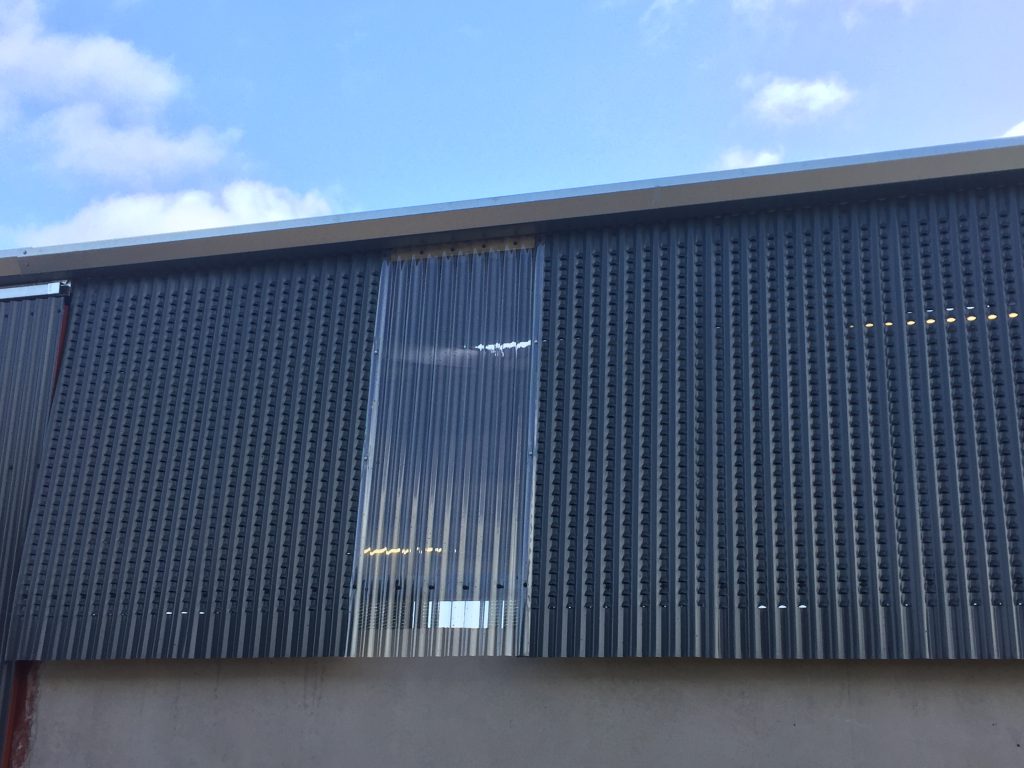 Two bays of the unit are allocated for 21 individual pens. Once the calf is born, it is transferred in to this area and bucket fed. The calf will stay here for approximately 10 days and will then be moved to the group pens. 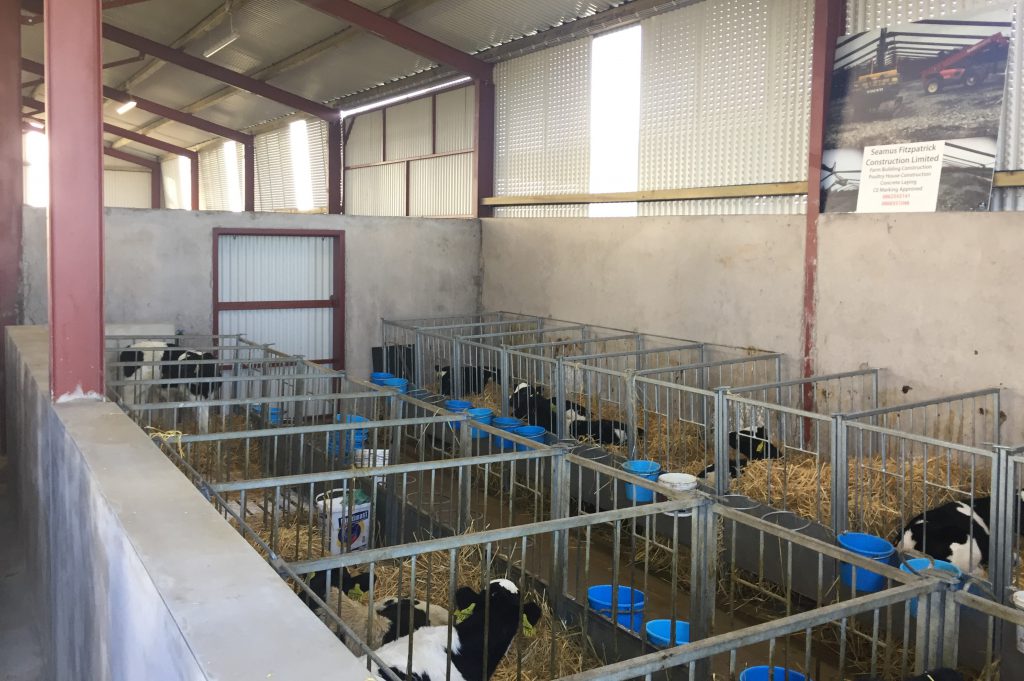 Bull calves are all sold off the farm at two-to-three weeks. On this, he said: “As soon as the calf is fit for the batch pen, off it will go.”

The slatted area encompasses three bays of the shed. There are 18 cubicles located to the back of the slats. These are lined with rubber mats. Dermot will house calves here once they are weaned. 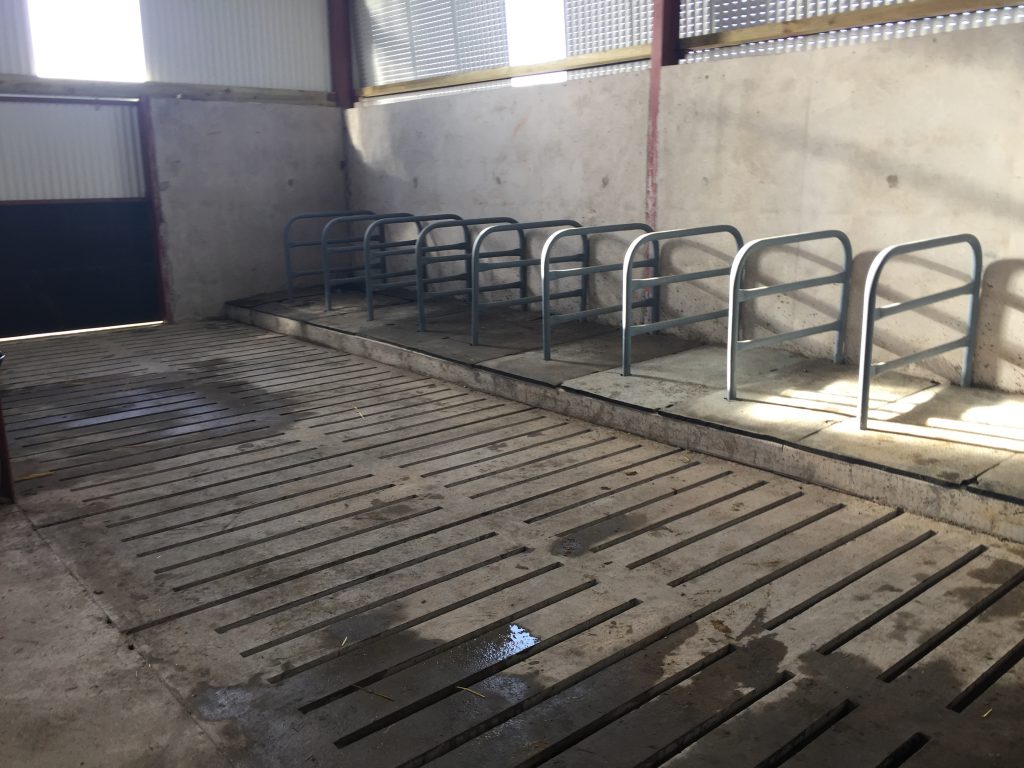 Would he change anything?

Although Dermot is extremely happy with the build, there is one aspect that he would change if he was to carry out the build again.

“If I was to change anything about the shed, I would probably leave the group pens 6ft longer. I would then place a timber 6ft back from the feed passage. This would be left as a clean area,” he explained.

“If I was to do this now, the lie-back area would be too small. This is where the calves are feeding and I would just rather if it was a clean area.”

In addition to the slatted area, group pens and individual pens, there is a store area located in the centre of the house. Milk replacer and crunch are stored here. 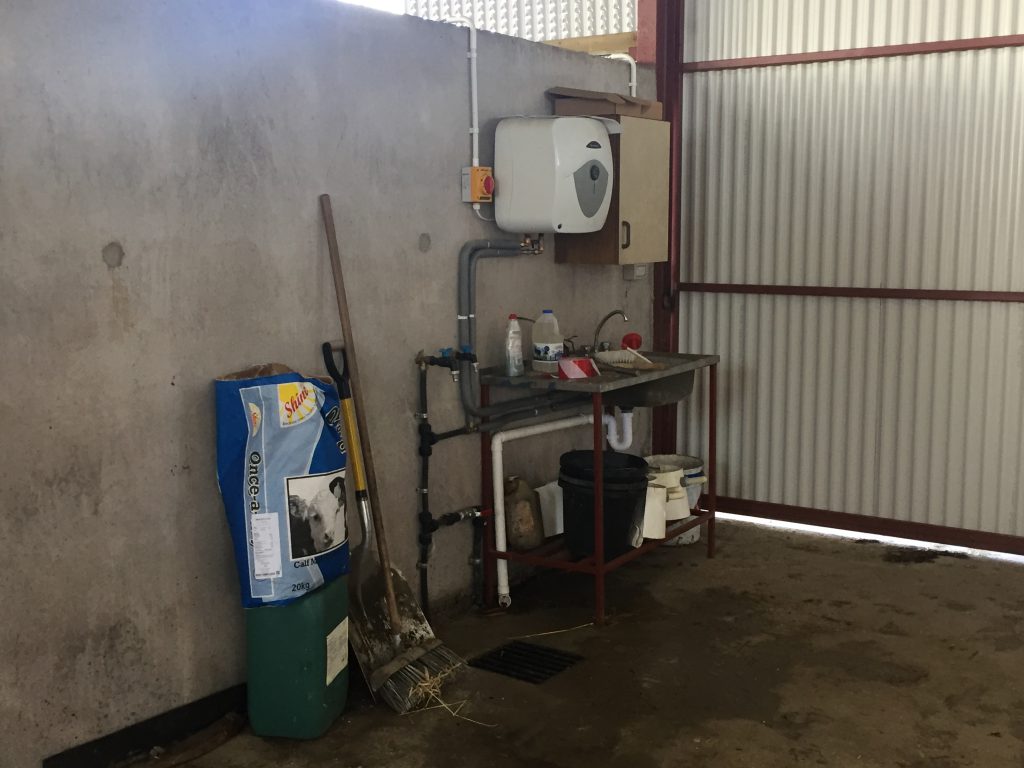 Cost and other buildings

The total cost of the calf shed was approximately €80,000. It stood at €65,000 before final fixes and added extras – such as locking feed barriers.

The shed was constructed through grant aid from the Targeted Agricultural Modernisation Scheme (TAMS) and the majority of work was completed by Seamus Fitzpatrick Construction. The locking feed barriers and pens were supplied by Condon Engineering.

“It’s a case of so far so good with the shed. I have about 50 calves in it at the minute. My life is an awful lot easier now. I’m happy to go feed the calves now. Every other year, you would be fed up of doing it,” he explained.

A new parlour was constructed on the farm in 2012; it’s a 16-unit Dairymaster with the option to increase to 20 units if needed. A drafting system is also used and this proves useful during the breeding season. 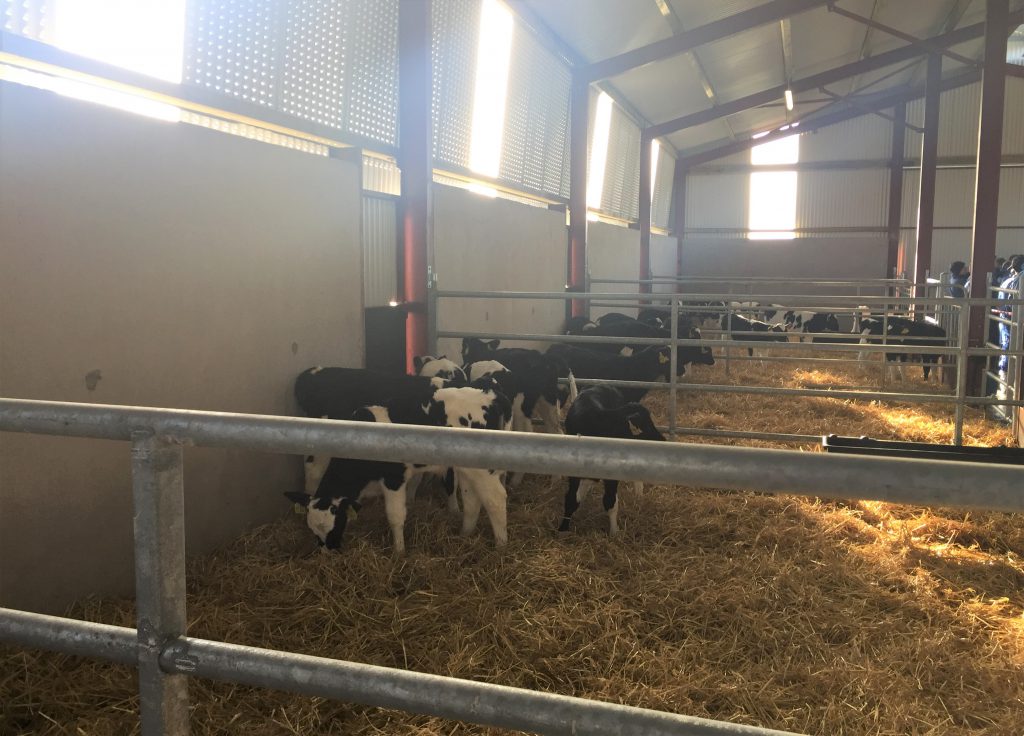 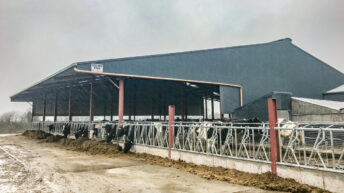 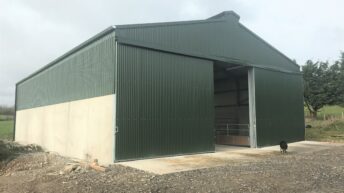