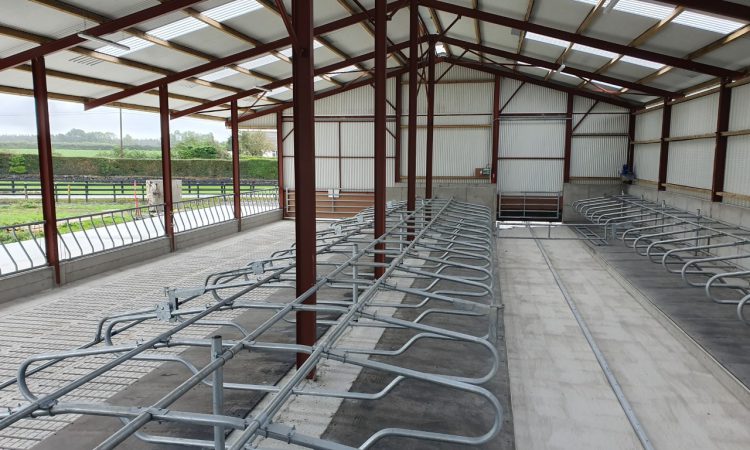 Farming in Leigh, Co. Tipperary, Edward Bowe – who operates a dairy farm – recently built a cubicle shed to accommodate up to 60 cows.

Like many dairy farmers, Edward increased his dairy herd from 45 up to 60 cows after quotas were abolished in 2015. This increase put his original 45-cubicle shed under pressure to house the extra animals.

Therefore, the decision was taken in 2017 to build a new shed close to the milking parlour and calving shed.

Speaking to AgriLand, Edward said: “It was something I knew I had to do; not only was the old cubicle shed too small but I needed more slurry storage as well.

“The piece of ground I built the shed on was never used for anything in particular, so it made sense to build it there.” 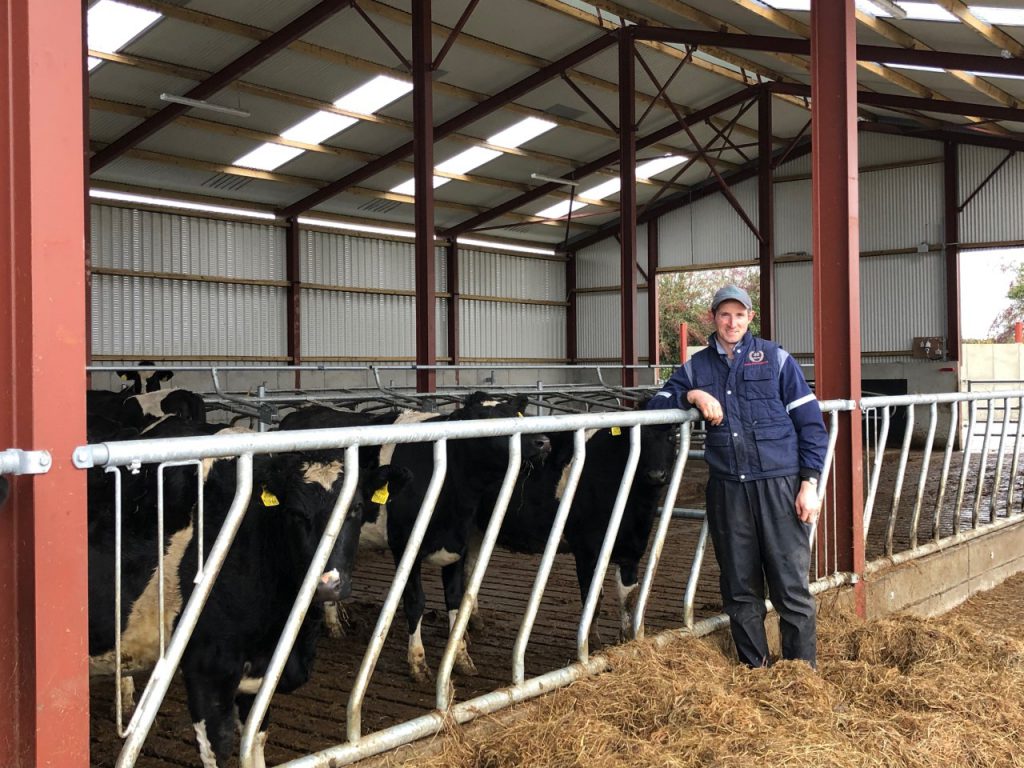 As well as milking cows, Edward keeps up to half of his bull calves and finishes them for slaughter.

“This new shed allows me to keep the dairy and beef enterprises separate now. Before, the cows and store cattle were housed side by side,” he said.

“It used to be a pain having to bring cows down to the shed when they were due to calve. It was a long walk from the old shed.

“Now, the cow accommodation and calf house are right beside each other so it should make my life a whole lot easier from a management point of view.”

Edward contacted Aidan Kelly – of Agri Design and Planning Services (ADPS) – who designed the 60-cubicle house and outside feeding area. The shed was erected by Gleeson Steel and Engineering.

“I brought Aidan out to look at the site, as I wasn’t sure if the area was suited for a shed. However, Aidan didn’t see any reason why I couldn’t build the shed, as long as enough filling was laid down.”

A temporary road was laid down to herd the cows in for milking, as the old road was cleared and a slatted tank installed in its place.

The site the cubicle shed was built on was described by Edward as “wasteland” and was the ideal location to build his new shed.

An old roadway used to go through this ground and it was used to herd the cows from the paddocks across the road to the milking parlour.

“The only major issue with the site was that it required a lot of filling to bring it up to the level of the existing buildings in the yard.

“I spent the best part of €13,000 alone on filling. However, the only good thing was that the contractor didn’t hit rock when he was digging out the soil for the slatted tank.”

The concrete walls of the shed stand at 2.4m high. The slatted tank is: 31.3m long; 4.4m wide; and 2.7m deep. There are two agitation points at either end of the shed.

The cubicle shed is six bays long, with each span 4.8m in length. A roof overhang is incorporated into the design just over the feed passageway, to prevent rain getting into the shed and to keep the silage dry. 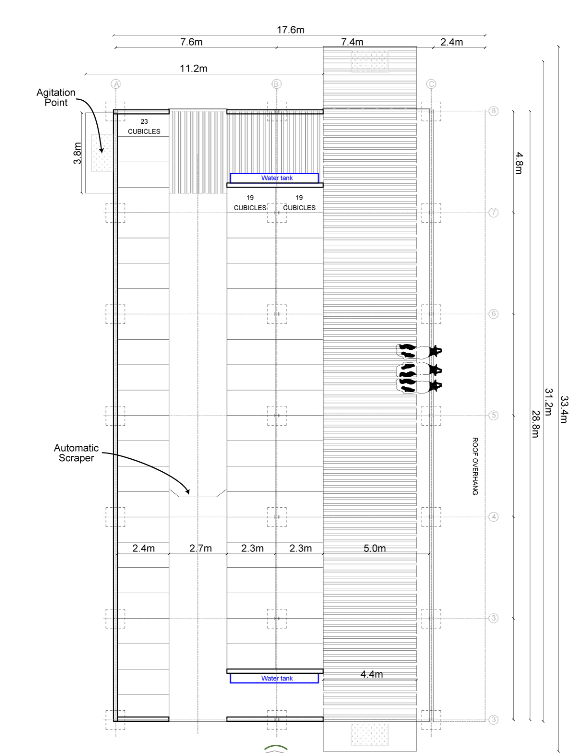 There are 60 cubicles incorporated into the build. The 22 cubicles along the length of the concrete wall are 2.4m long and 1.15m wide.

The build contains a number of features that make it a comfortable and healthy environment to house cows in.

The high-pitched roof and the gap at the top of the galvanised sheeting allow for increased airflow throughout the shed.

“The one thing I was afraid of was having a warm and stuffy shed that would lead to animal health problems. The cows were used to good ventilation in the old shed and I wanted the same in the new build.”

Another aspect of the design is the inclusion of 12 clear roof lights.

There are two sliding doors at the front of the shed and two hanging gates at the back leading into the feed passageway and milking parlour.

There are two water tanks at either end of the shed, which allow Edward to split the shed in half and keep the cows and heifers separate.

Moreover, 60 cubicles were installed, with cow mats placed in each stall to aid with cow comfort. Along the entire length of the cubicles is a fold-over bar that allows Edward to stop the cattle walking or lying on the cubicles when he doesn’t want them to.

Also incorporated into the cubicle shed are two Cubicle Dividing Gates, that Edward says were “well worth the investment”.

I can divide the cattle up in the shed with these gates, so I decided to house my in-calf heifers recently and give them access to 20 cubicles.

“When I house my cows next week, I can keep the two groups separate. Furthermore, the fact that I have the heifers on one side of the shed, it keeps the other half clean for the cows when they come in.”

Edward plans to install a windbreaker (in the shed) before all the cows are housed for the winter. 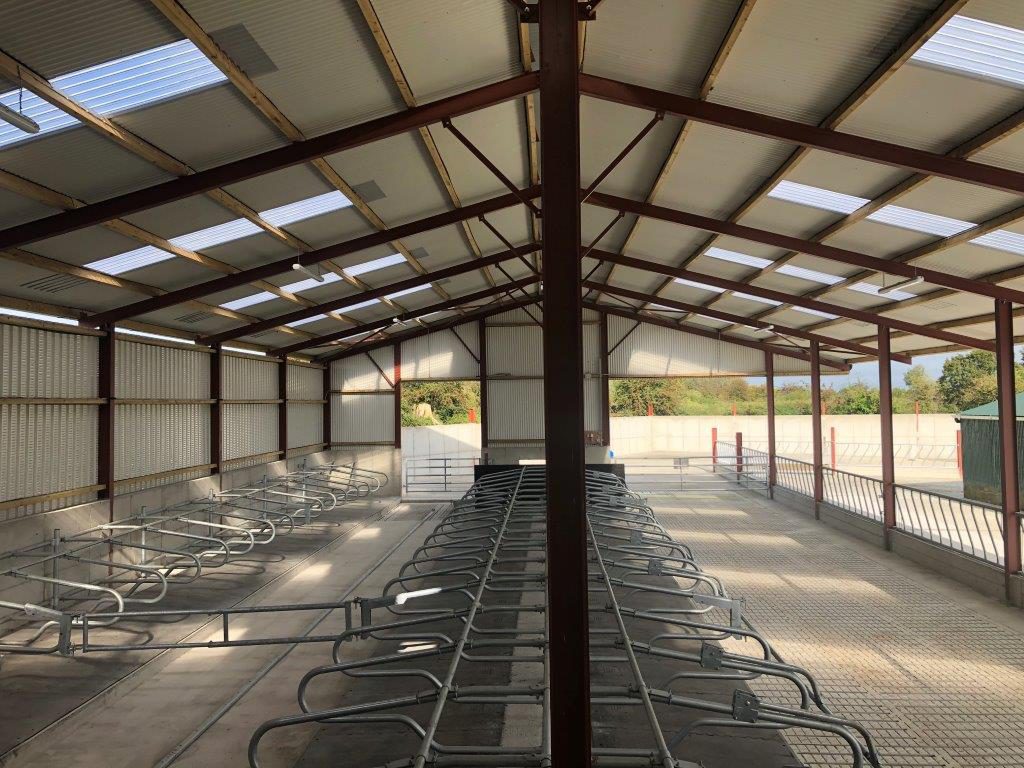 “I was up feeding the heifers last week and there was a strong breeze coming in from the back of the shed, so I said to myself I better put up a windbreaker before the cows come in, to avoid any health problems it might cause during the housing period.”

An interesting feature of this cubicle shed is the incorporation of Cubicle Lockout Arms, that fold up or down.

These metal bars can be folded down to prevent the cows from lying or standing on the cubicle – therefore keeping the mat clean and preventing further wear and tear.

Furthermore, an automatic scraper is installed in the back passageway between the two rows of cubicles. The scraper pushes animal faeces down to the L-shaped slatted tank at the end of the shed.

Directly outside the cubicle shed, towards the milking parlour, is a feeding area/yard that can be used to feed the cows.

Mass concrete walls were erected, to enable Edward to roof the area and convert it into another shed or install outdoor cubicles in future (if he so decides).

However, for now, he is content with how the farmyard is taking shape and feels if he continues to milk the same number of cows there won’t be a need to roof the area.

“At the moment the only use I have for it is moving cows from the cubicle shed to the calf house and during the grazing season when the cows walk through the shed and down the feeding area into the parlour,” he explained.

The yard is set up in a way that when Edward herds the cows in for milking he can shut the gate behind them and open the gate beside it to let the cows back out into the feeding area/yard when they are milked.

The build began in October 2018 and was finished in July 2019. Edward was in no rush to get the build finished as he wanted to let the fill settle before they began pouring concrete. 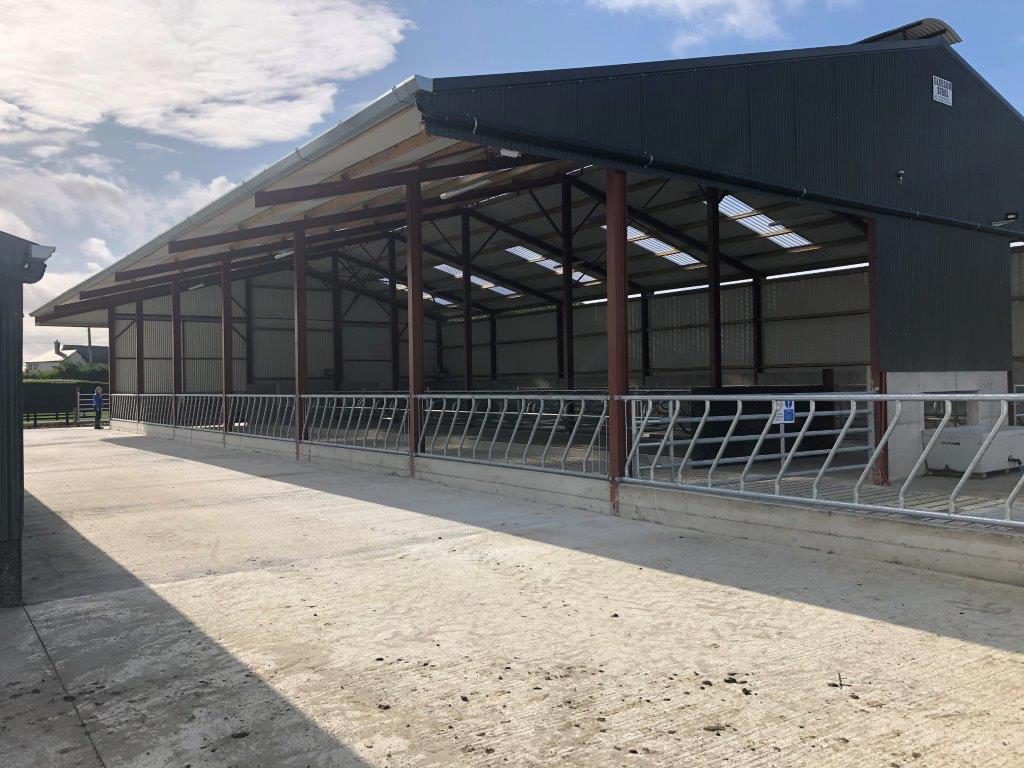 Commenting on the build, Edward said: “It is probably the final piece to the jigsaw at this stage. I was struggling for cow accommodation and slurry storage so it made sense to build the shed.

“It turned out really well and I’m very happy with the end product. The decision to put up the concrete walls around the entire yard – from the corner of the cubicle shed around to the parlour – was the best decision I made.

Not only does it make the yard look tidy but it also makes it safe; as there is no hope of a cow getting out to the main road which I was worried about if I had just put up metal poles and railings.

“The only thing left to do is make a doorway into the calf house that will allow me to connect the new yard and calf shed together and to put up a windbreaker in the cubicle shed,” Edward concluded. 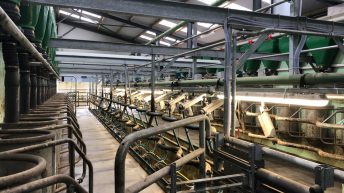