Increasing herd size – on any farm – is no easy task and can be very expensive. This is particularly the case when it comes to accommodation.

Many farmers modified, expanded and developed existing buildings to cope with the larger cow numbers. These large-scale projects have been completed overtime.

One such expansion happened in Co. Kilkenny. Starting out in 2009, the milking was done with a 15-unit mobile parlour.

However, proceedings have moved extremely quick on this dairy farm and the farmer plans to milk 500 cows in 2018. A target of 700 cows has been set for 2019.

“We grew quicker than we had planned to. Once we got moving we didn’t stop. We had no choice but to learn fast and we’re learning all the time,” the dairy farmer behind the project explained.

The existing slatted unit was built in 2009, along with a 32-unit milking parlour. The 2015/2016 build consisted of more cubicles and a collecting yard. Precast, mobile cubicles can be placed in the collecting yard as required. 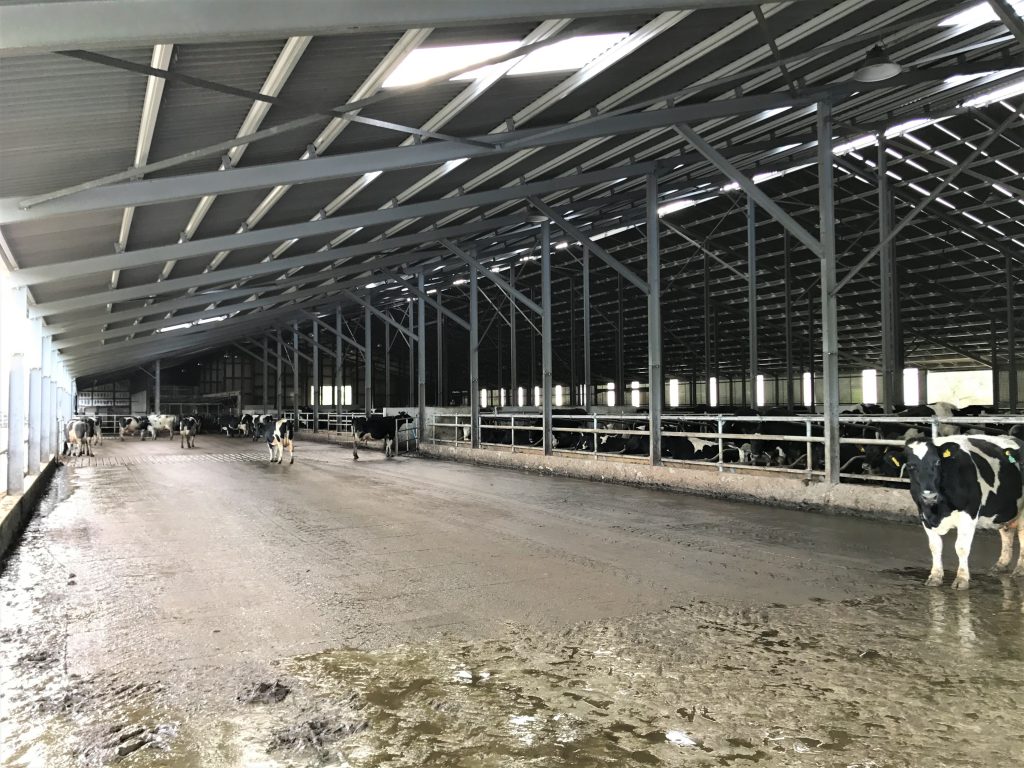 The farmer commented on his slurry storage capacity, stating: “We are okay for the minute. We have enough storage. When we increase cow numbers again, we will probably build an over-ground permastore. It will give us more comfort.” 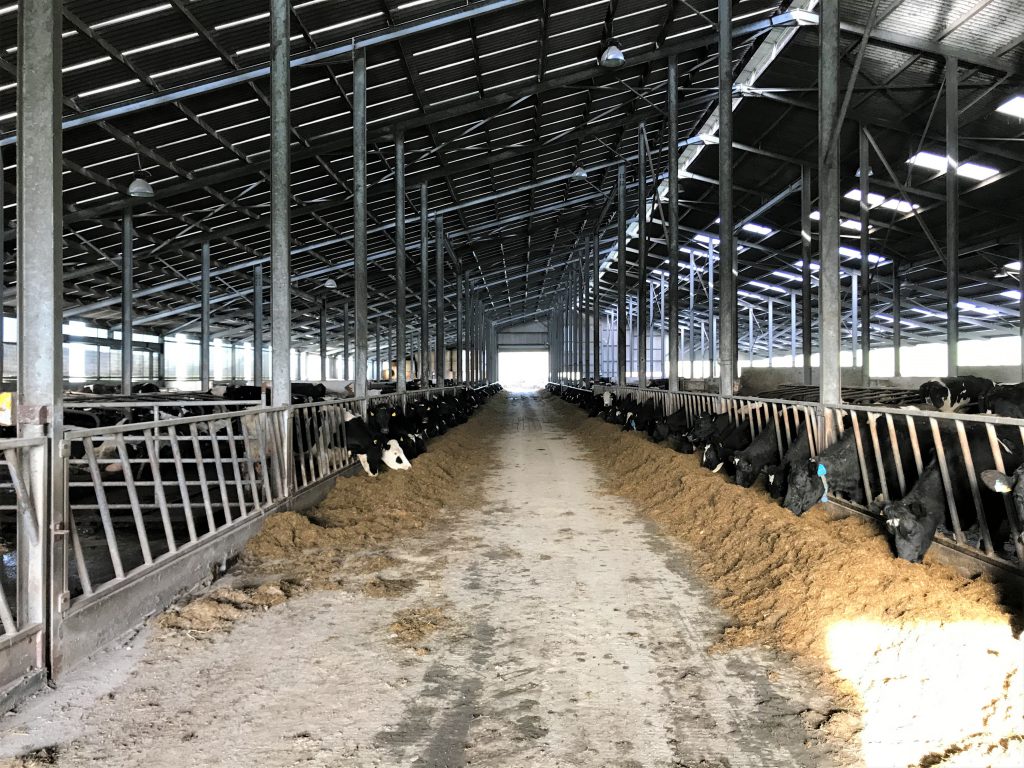 There is plenty of light in the slatted house. At the apex, space was left either side to increase light. Space sheeting and skylights were used on the roof of the shed to allow as much light to enter as possible.

Vent sheeting was fitted along the length of the structure to improve ventilation. However, when the farmer increased cow numbers, he noticed that the shed became very warm.

“During the winter period, when the cattle are housed full-time, I noticed some of the cows starting to sweat – especially if the doors are closed,” he explained.

We took off every fifth panel to increase airflow and ventilation throughout the shed – it works well. It also makes the shed brighter.

He continued: “I’m going to look into putting up ‘space boarding’ on that side of the shed. It should provide adequate ventilation.” 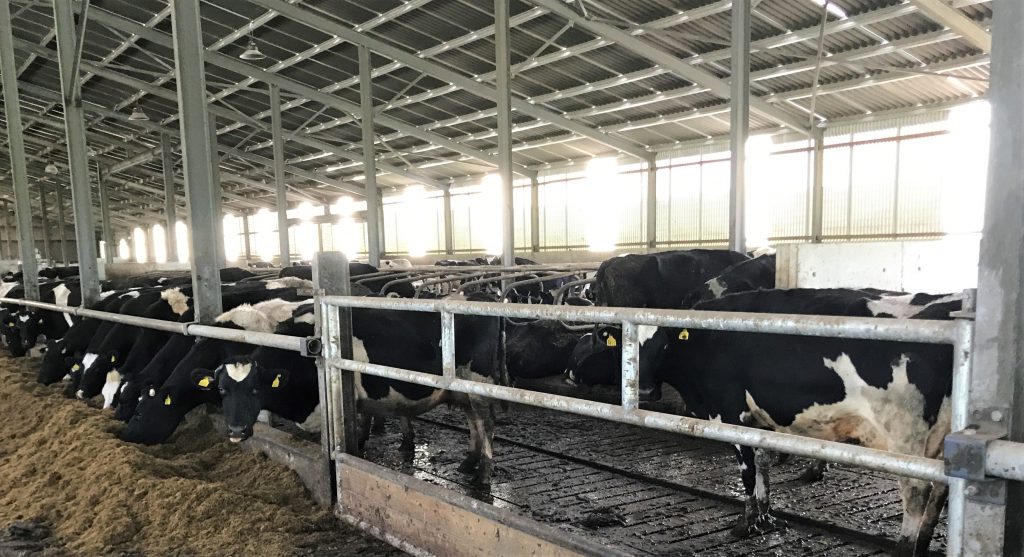 Light emitting diode (LED) bulbs are located in each bay of the shed.

“The light coming from these lights is nearly too strong. I’d never turn them all on. There is no need for them; especially when the cows are calving – one light at either end of the shed is nearly enough.”

‘X-braces’ are located throughout the unit, providing support to the building. “You would be glad you have them on a windy day,” he laughed. 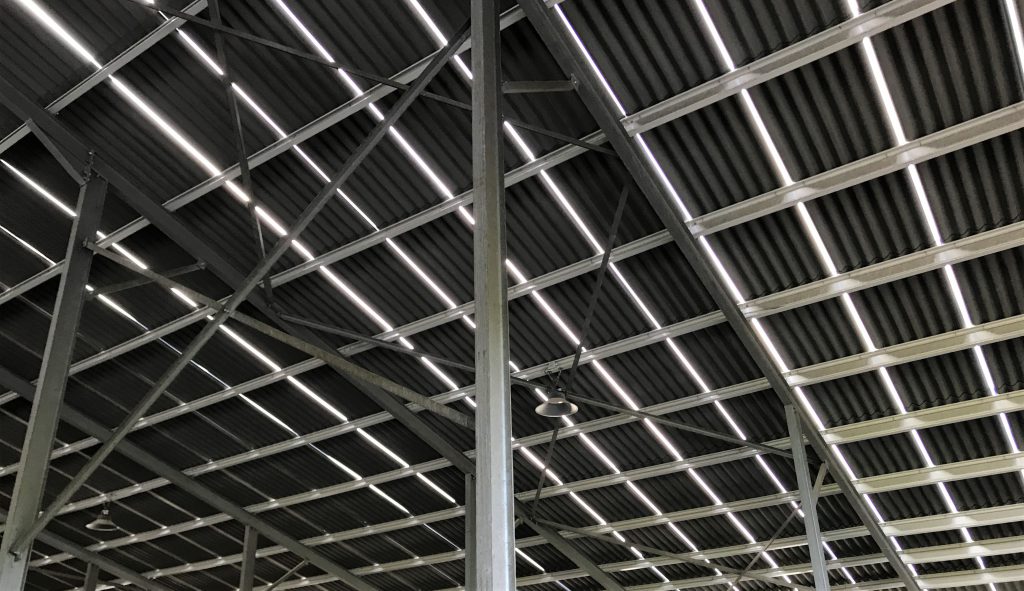 ‘Feed-face’ gates are also located at intervals throughout the shed. These provide ease of access for the farmer and it saves time when moving animals.

“When I was designing this shed, I used to think of the worst case scenario. I used to imagine the month of April when we would be calving cows, milking cows and carrying out AI. We need to have a good system. We focused a lot on cow flow.

Because we were expanding so much, the shed needed to be well planned out to make our lives easier. 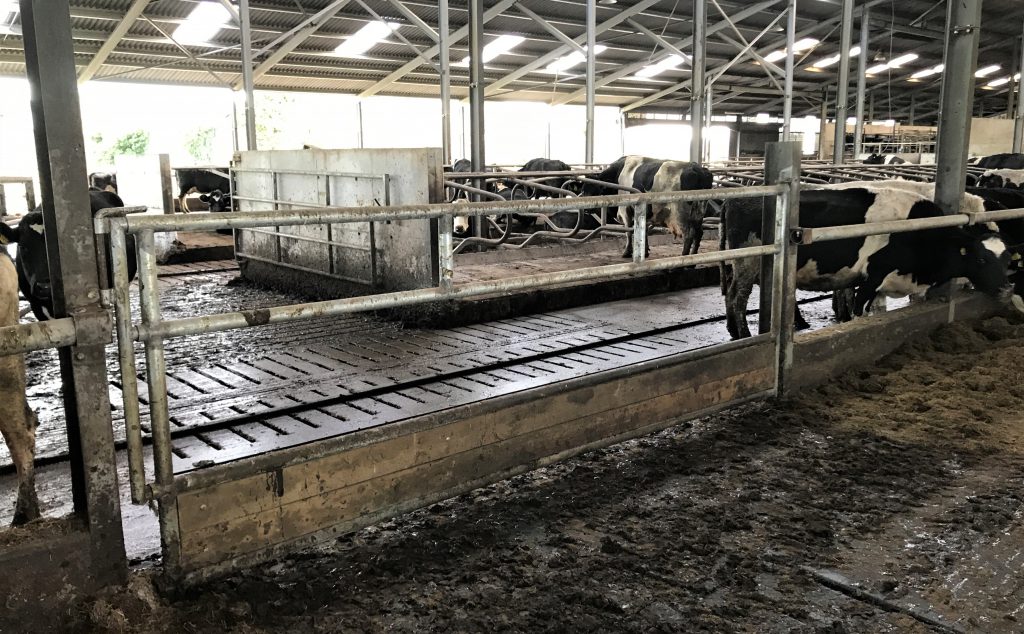 There is one full-time and one part-time worker on the farm. During the spring time when cows are calving, more help is drafted in. Farming on such a large scale is very time consuming and every minute is precious.

The peat is a great job for the cows. They are very clean coming into the parlour.

“We have a little machine for spreading the peat and the lime. It’s a good job and it takes the hardship out of it. We can run around the shed in no time at all,” he explained. 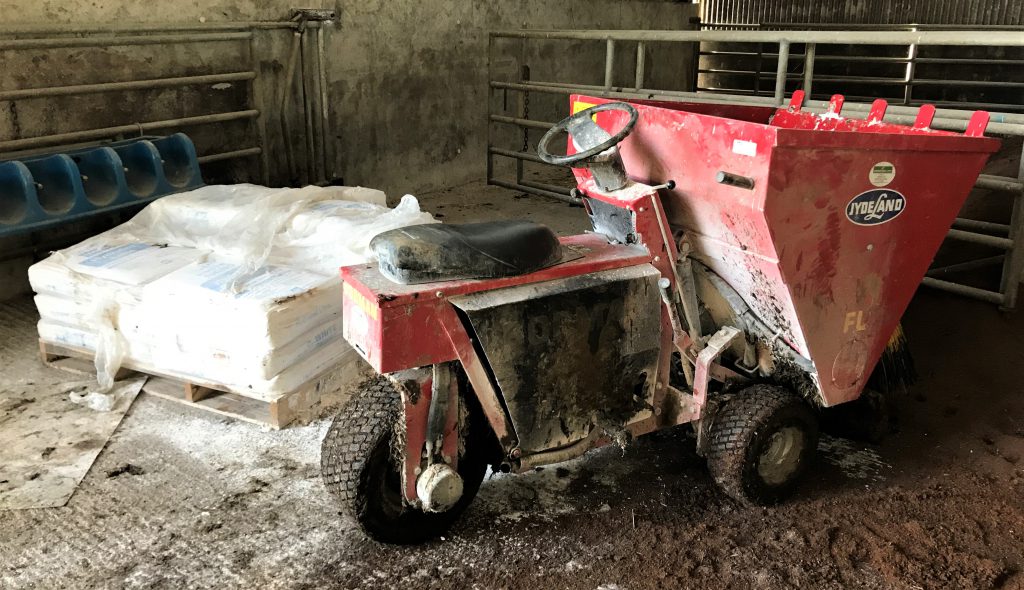 The farmer also made up a device for pushing the silage into the cows. Silage can be fed both inside and outside the shed.

We try and keep the labour to a minimum around the farm. We have a lot to do everyday.

“The feed face is so long you couldn’t even think about shoveling the silage in. To be honest, I don’t even know where the shovel is,” he laughed. 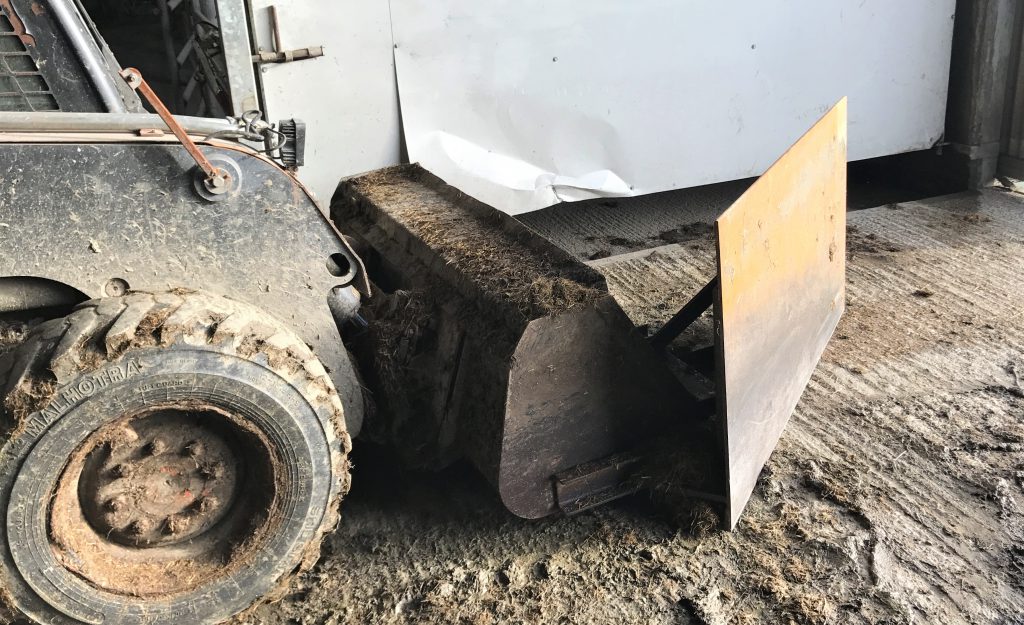 With so many cows calving in the spring time of the year, it is an extremely busy period for this farmer. The shed is home to a calving and a mothering area. As cows come close to calving, they are moved into the calving area.

“Once the cow calves, both the cow and the calf will be moved to the a mothering pen. Every calf will be tubed with colostrum,” he said. 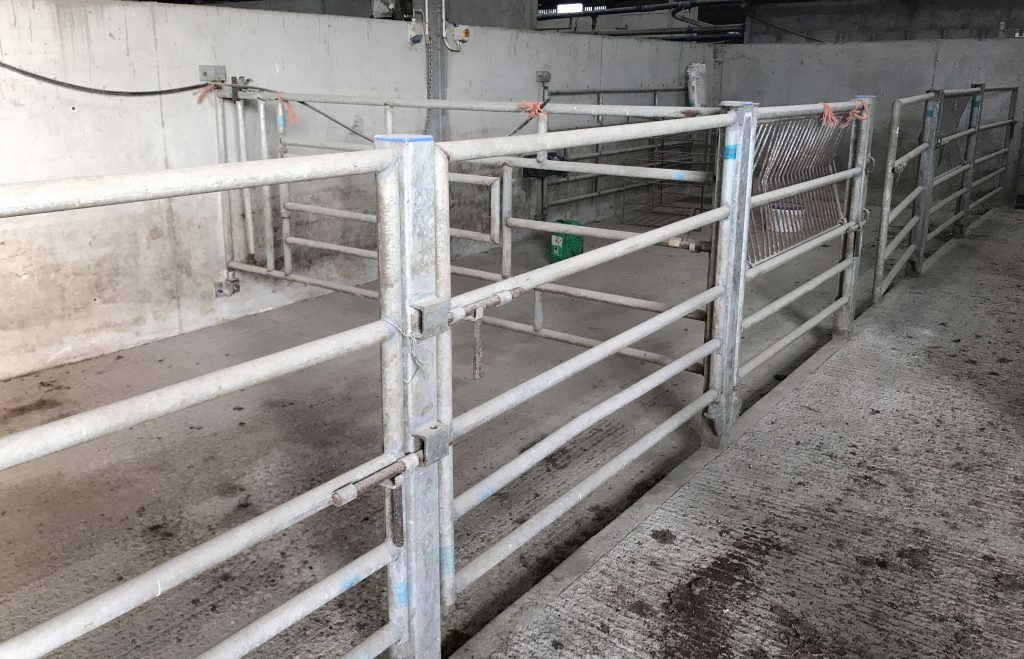 The 32-unit Dairymaster parlour was installed in 2009. The milking process takes approximately 2.5 hours – milking 200 cows per hour. However, there are plans in place to build a rotary parlour, just off the existing parlour, to facilitate the growing numbers of cows.

“The rotary parlour is the next stage of our expansion and it will be a big undertaking,” he said.

We will build it into the existing design and we will still be able to use the collecting yard. However, we will have to modify it a little bit. 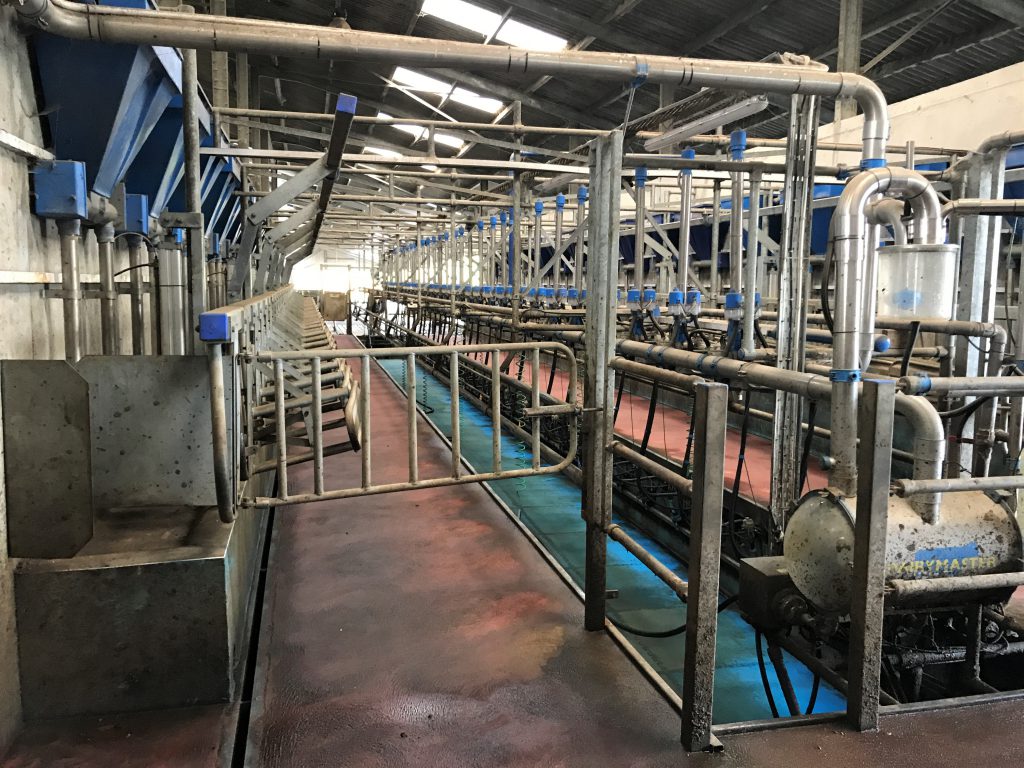 The shed (galvanised-steel pillars; skylights; fibre cement and vent sheeting) was all supplied by Gleeson Steel and Engineering.

The cubicles; sliding and roller doors; and feeding barriers were also supplied by the same Tipperary-based company. 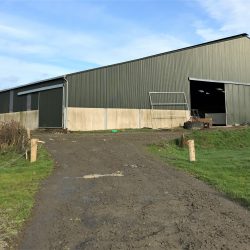 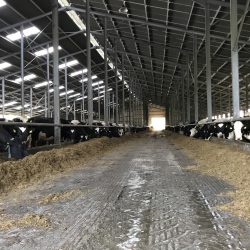 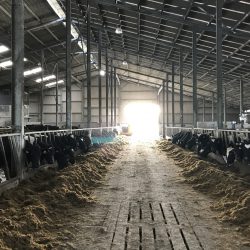 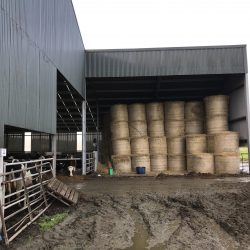 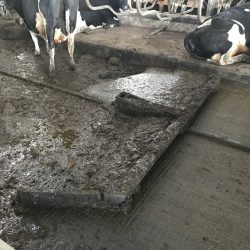 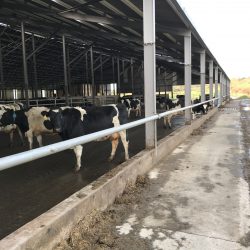 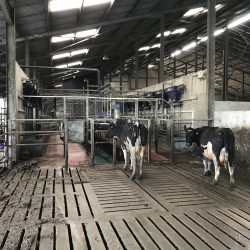 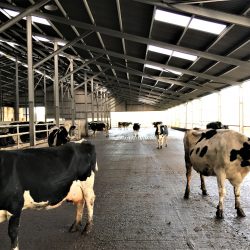 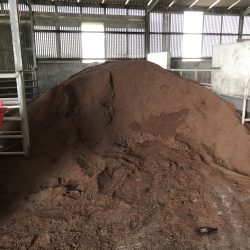