In this week’s Buildings Focus, AgriLand made the trip down to see a 24-unit rapid-exit milking parlour in Co. Wicklow.

The parlour, which was installed in the summer of 2019, is on the farm of Larry McGrath – who farms alongside is father, who is also called Larry, and his brother, Sean.

The McGraths run a spring and autumn-calving system, which sees them milk, in total, 260 Holstein Friesian and Fleckvieh-cross cows.

The trio used to milk their herd through a 13-unit herringbone parlour up until last year; however, like is the case for so many other dairy farms across the country, the McGraths expanded cow numbers and it came to a stage where milking in the old parlour was becoming “unsustainable”.

Speaking to AgriLand, Larry said: “Over the last few years we have increased cow numbers, and like so many other dairy farms it came to a point that we needed to upgrade our milking facilities.

The rows of cows were increasing every year and it just was getting to a stage where I was stuck in the pit for three hours every milking – which was just unsustainable.

“Six hours of my day was being spent in a pit. Then, add in the time it takes to bring in the cows and you’re talking about another hour or so. Something had to change and thankfully we were able to upgrade; the difference it has made has been unbelievable.” 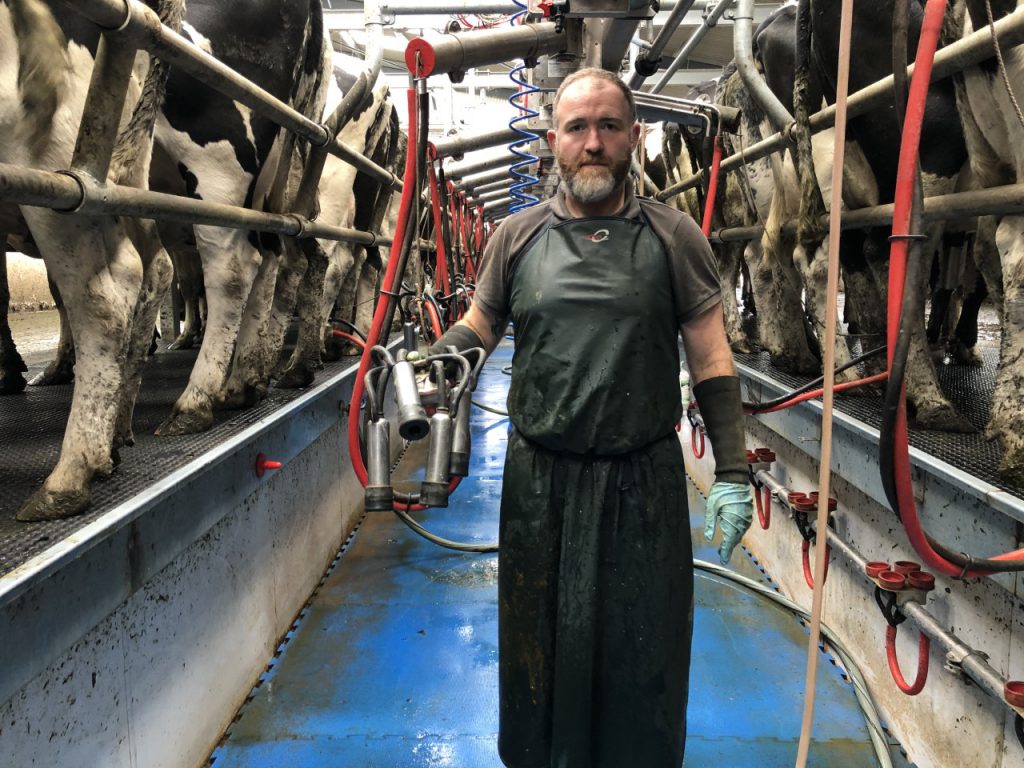 After spending years milking in a traditional herringbone parlour and seeing how long it was taking to milk his cows, Larry felt it was time to upgrade. But, at the beginning, he wasn’t sure what this upgrade would look like.

He explained: “At the start, which would have been two years ago, when we originally thought about upgrading, we thought about going with another herringbone.

But then we thought about putting in a rotary. Although, I think, if you’re going to put in a rotary you would want to be milking in excess of 300 cows, which we probably won’t.

“And, if you want to maximise its use [rotary] you would want to be putting in a 50-unit rather than a 40-unit, because with a 40-unit you will always have a couple of bails empty every time it goes around.”

Larry added: “Then, on top of that is the cost of installing a rotary. It’s a huge investment in comparison to a herringbone parlour and, in our case, even a rapid-exit.

On top of that, we felt that you would need two people to milk the cows in a rotary, which sort of angled us more towards the rapid-exit.

“In our new parlour, one person can milk the cows no bother which is what we wanted. I’m not knocking the other types of parlours but I suppose we wanted a parlour that would suit us and I think we accomplished that.”

After deciding on what type of parlour they wanted, the next step was to pick a location to build the new milking unit.

Because the McGraths milk all-year-round, they needed to keep their old parlour going, while the new one was being constructed.

This meant that they couldn’t build on the site where the old parlour was; however, they didn’t move too far away with the new unit being erected a mere 50m away from the old parlour.

Aidan Kelly of Agri Design and Planning Services was called in to design the new milking unit, which also consists of a collecting yard and drafting area.

Construction began in 2018 and the new unit was completed in June of last year.

The site where the new parlour lies once consisted of old outhouses and a hayshed, so it worked out to be an “ideal site” as those old buildings weren’t being used.

The building itself, including the digging, concrete work and tanks was carried out by local contractor Eoin Kelly, while the shed itself was erected by another Wicklow native Tony Waters.

The parlour was purchased from Pearsons and it was installed by Keadeen Dairy Services.

The new build was carried out with the aid of the Targeted Agricultural Modernisation Scheme (TAMS). 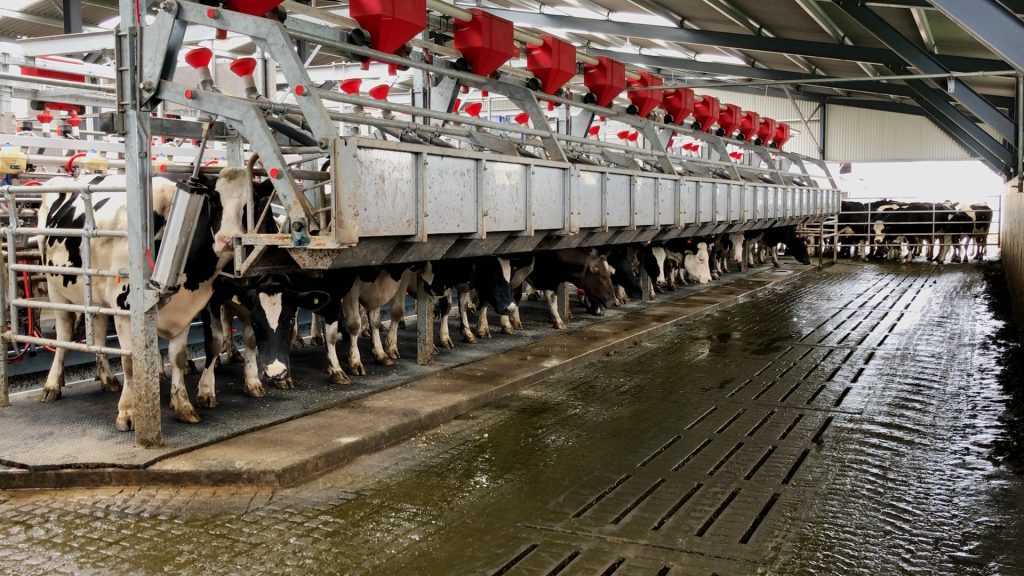 The building itself, which includes the milking parlour; drafting area; office; and bulk tank room is 39.7m long and 20.6m wide. The unit stands 8.2m high at the apex and 4.83m high to the eve gutters. The concrete walls of the shed stand 2.4m high.

The 24-unit rapid-exit milking parlour, which includes a passageway either side for the cows to exit, is 24m long and 14.2m wide.

When the cows leave the milking parlour they walk through the exit race that will either divert them down to the collecting area or into the drafting area.

The handling area – beside the parlour – is split up into: a crush; an exit race; one large and small pen; and a footbath. Slats are incorporated along the entire length of the exit race, while the rest of the area consists of a solid concrete floor surface. 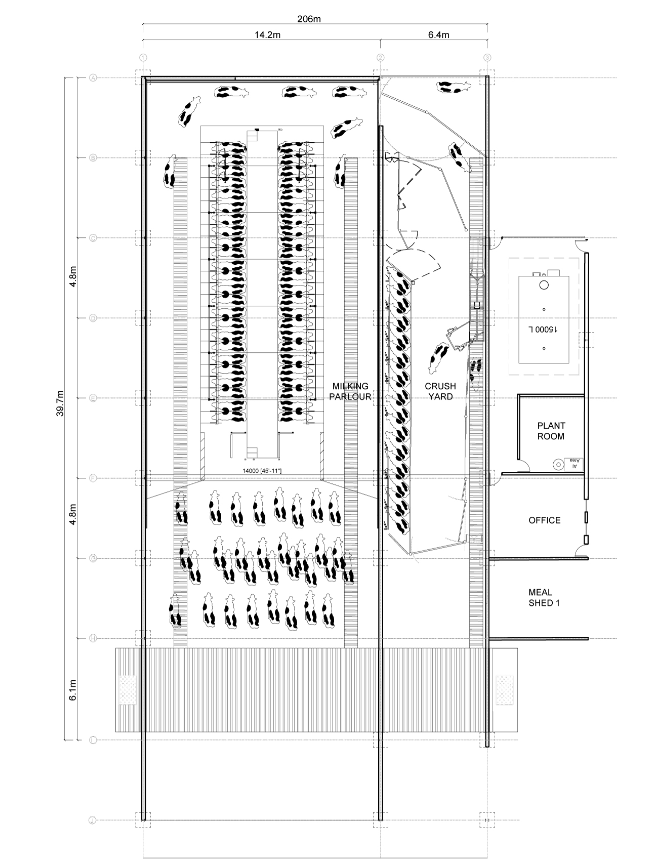 The new milking parlour comes with all the ‘bells and whistles’ that modern milking units contain these days.

The main features of the 24-unit parlour include: automatic-cluster removers; an auto-wash system; and feed-to-yield feeders.

Another interesting feature of the parlour is the inclusion of mats for the cows to stand on. Larry explained that the reason behind this was simply because the cows have to turn sideways and face out from the pit which is a “sharp turn”, rather than standing at an angle.

He explained: “The mats are there just for added comfort, especially for when they are turning and facing into the feeder.

“If they were standing on bare concrete, over time, it would get hard on their legs and they could end up having bother with their feet.

“They also have their own individual feeding trough, which eliminates any bullying between cows.

All in all, it’s a very relaxed and comfortable environment for the cows – which is what you want. 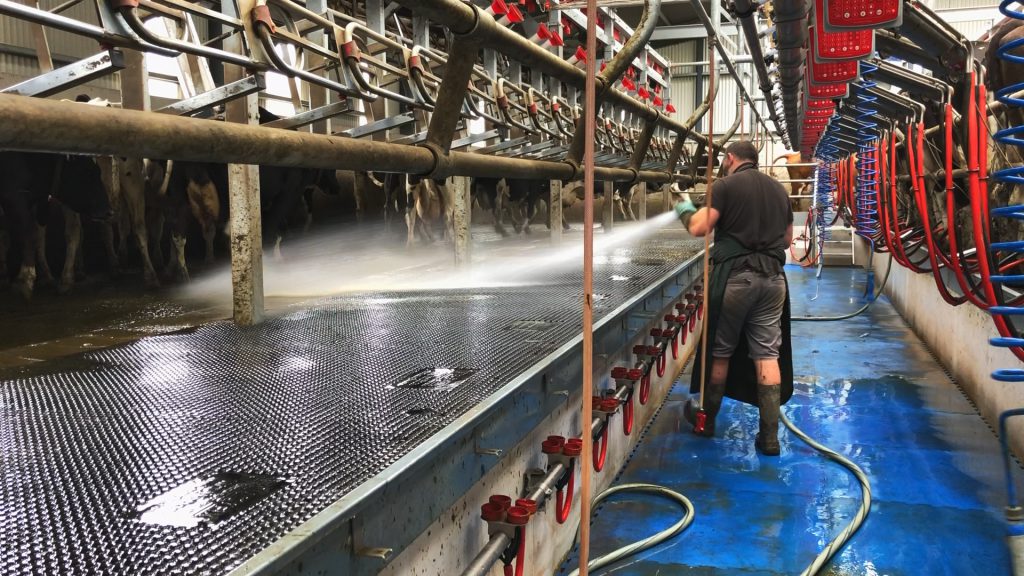 He added: “The cows took to it very well last year when they first went into it. Even for me working in it has been a breath of fresh air.

It’s great to be able to work in a bright and spacious parlour. The old parlour had a low roof and it was a lot darker inside.

“If you’re building something as big as this you want to make it as good as you can, and thankfully it worked out well for us.” 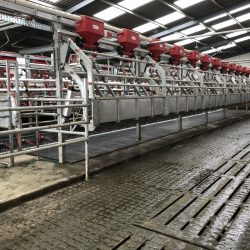 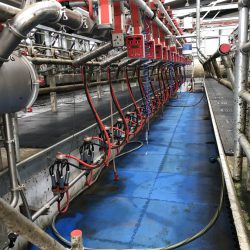 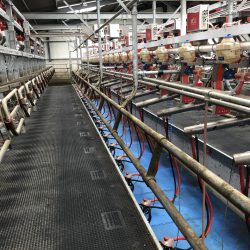 From talking to Larry, the message was clear: The one thing he was looking for in a new parlour was ‘speed’.

He explained: “Like I said already, it was taking us three hours to milk 230 cows last year in the old 13-unit herringbone parlour.

So, the first thing on my mind [when deciding on what parlour to go with] was having a parlour that would allow me to milk my cows as efficiently and quickly as possible.

“With the new parlour, at peak, I can milk the cows in an hour and a half, which is a huge amount of time knocked off in comparison to the old one.” 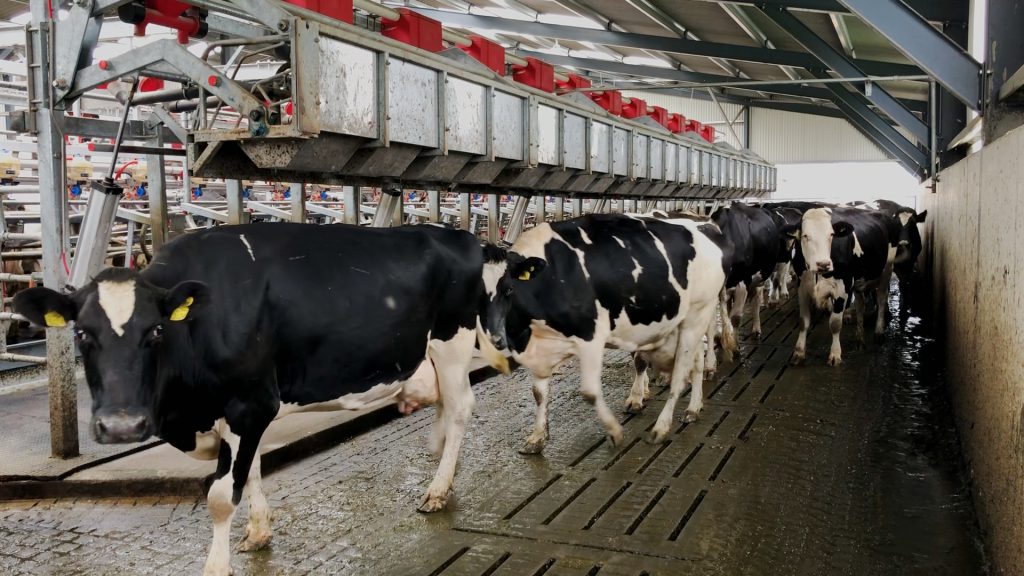 Larry explained: “The length of a herringbone parlour is what kills you. The time it takes to get cows out of it, in particular, is where a lot of time is lost.

With the rapid-exit, I can have all 24 cows out of it in about 10 seconds – which is super fast.

“As well as that, as the trough is lowering for the next batch, I can let the next row of cows in. Whereas, before, in the old parlour, I would have to wait for all the cows to be out and close the gate after them before I could let the next row in.

“There was a lot of standing around in the old parlour, whereas, with the new one, I am constantly going which is good because I’m not wasting time.” 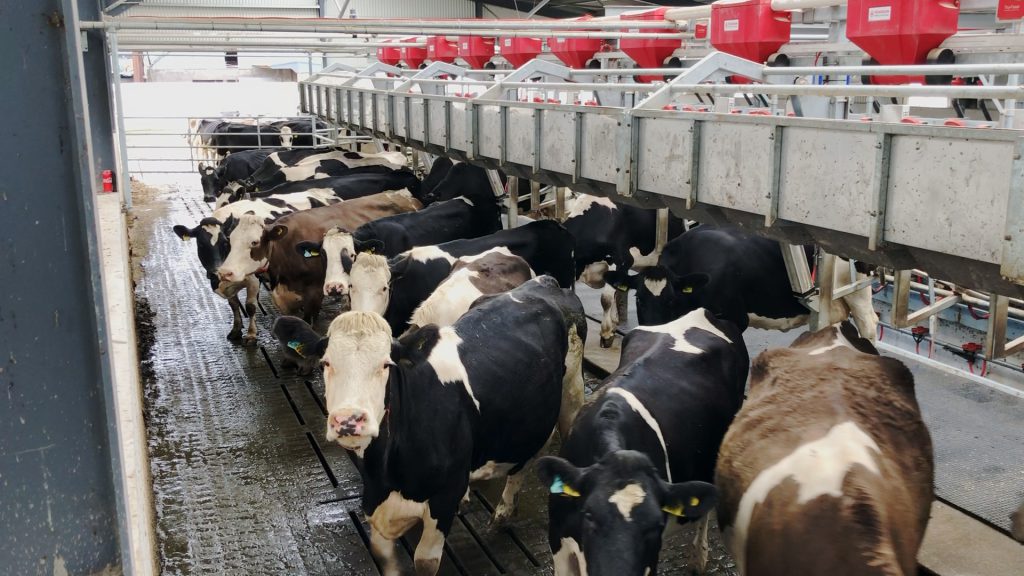 ‘Taking the hardship out of separating cows’

Right beside the parlour, under the same roof, is a drafting area and handling area, which were designed and erected by O’Donovan Engineering.

Again, similar to the new milking facility, Larry said the drafting area has been a “huge help”.

He noted: “A big part of the reason why we spent that bit extra money was because that we knew we would be getting twice the value out of everything.

We milk all-year-round, so the parlour is always in use and for the large parts of the year the drafting area is too. 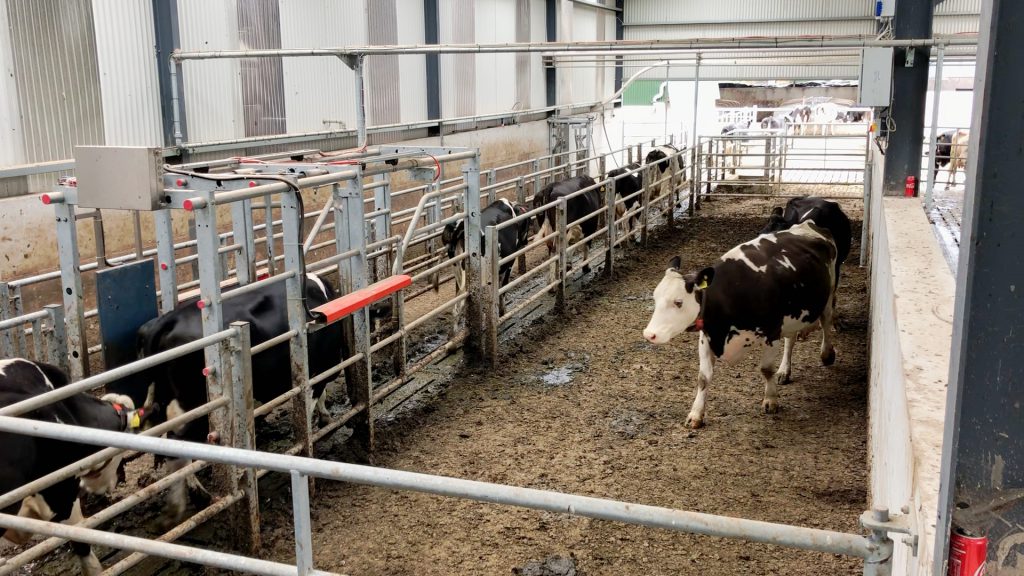 He added: “With spring-calving herds, the drafting area might only be used for the breeding period in late spring and early in the summer, mainly, while with us, it’s used a lot more often because we have the autumn-calving herd as well.

“The huge benefit of the drafter is that it will pick up any cows in heat – with the help of the collars. I can also go into the office before milking and log into the computer and draft cows from there or else I can go onto my phone and draft from the pit.

Again, it saves me so much time. After milking the cows you want are there in the pen away from the rest of the herd.

“It’s a nightmare trying to find one cow among 260, which was what we were doing the last few years. It has [the drafter] taken the hardship out of separating cows.” 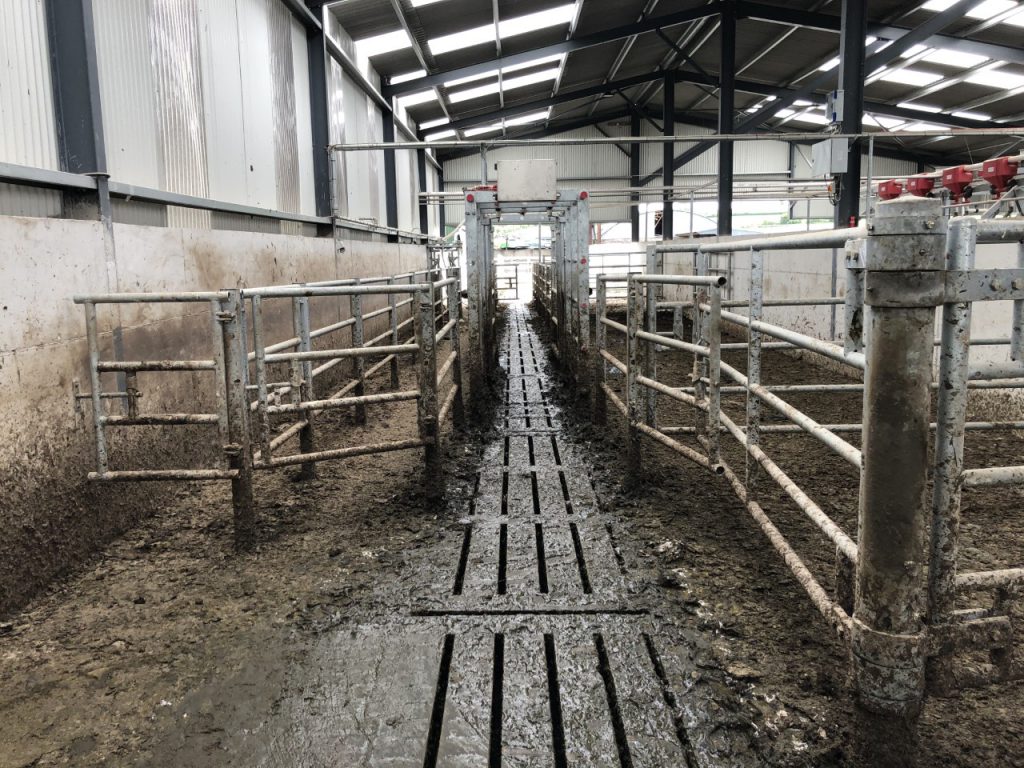 Speaking about the new build, Larry said: “All in all, we couldn’t be happier with how it turned out.

The three things that I was looking for in a new parlour I was able to achieve which were: speed; comfort; and efficiency.

“When you’re in a parlour twice-a-day for 365 days of the year, you want a bit of comfort and thankfully we were able to achieve that.” 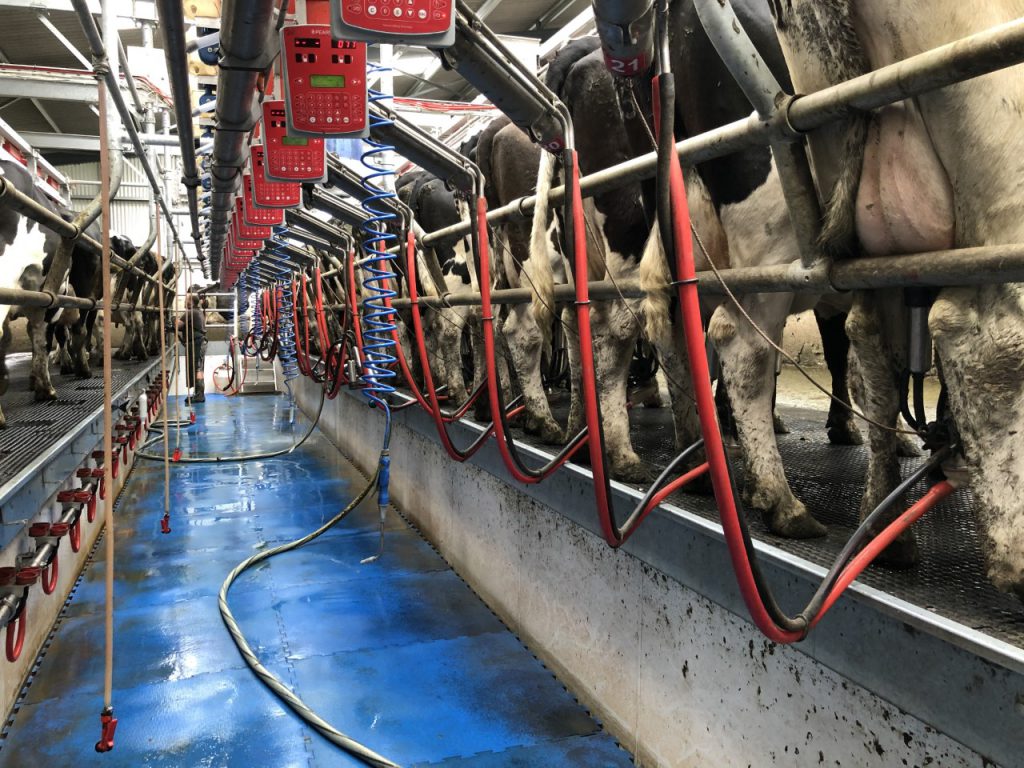