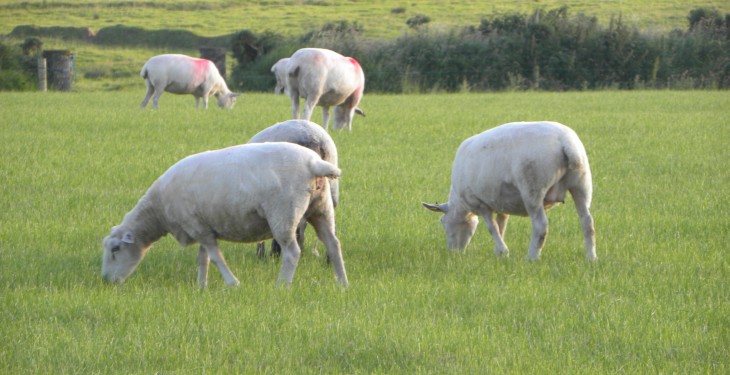 Breeding ewe lambs, provided that they are managed to meet their nutritional requirements, reduces the cost of rearing replacements and increases flock output and profitability.

A major study was initiated recently at Athenry with the objective of evaluating the effects of age at first lambing (one or two years) and ewe genotype [>75% Suffolk, Suffolk x Belclare, purebred Belclare] on the lifetime performance of ewes.

This study will last until the ewes are culled for natural reasons. The different ewe genotypes were included in this study to evaluate the effect of prolificacy and age at first lambing on age at culling, replacement rate and lifetime output.

Evidence suggests that it would take a 35 day joining period for first mating to be achieved by 90% of a ewe lamb flock.

As ewe lambs have a lower pregnancy rate per oestrus than mature ewes, only 70% (approximately) of the animals would be pregnant after a 35 day joining period.

The ‘ram effect’ can be used to induce ewes (ewe lambs or adult ewes) to start cycling provided they are sufficiently close to the time of onset of normal cyclicity but have not entered their breeding season.

For the ‘ram effect’ to work the ewes should have not been in contact (either sight or smell) with rams for the previous month.

The ‘ram effect’ is due to the impact of pheromones released by sexually mature rams on ewes that are not yet cycling. An apron can be used on the ram to prevent mating if any ewe is already cycling.

The ‘ram effect’ will also compact both the mating season and the subsequent lambing season.

Upon introduction of adult rams most ewes that are not already cycling will have a ‘silent heat’ (i.e., ovulation without oestrus) within 36 hours and a proportion will have a second silent heat after 6 days.

These ‘silent heats’ are not detected by rams. The rams can be removed after 24 to 48 hours. Ewes will cycle at approximately 17 days after the final silent heat.

Consequently there are two peak times for the number of ewes showing heat, namely 18 and 23 days after exposure to the rams.

Consequently fertile rams should be introduced to the flock 14 days after the rams used to induce the ‘ram effect’ were introduced; the peak mating times will be four and nine days later.

The reason the rams are introduced at day 14 is to allow for variation in cycle length and to pick up any individuals that were already cyclic at the time of ram introduction.

At Athenry the ‘ram effect’ was used on the ewe lamb flock. All ewe lambs were mated during the breeding season and the lambing season was compact, with 75-90% lambing within two and three weeks, respectively.

Also it is essential to have adequate facilities – especially lambing pens (one pen per six ewes) and labour – to cope with the flock during the lambing season.

Ideally, ewe lambs should be mated so that they lamb during the second half of the lambing period of the adult flock to facilitate cross fostering etc., and also to avoid an extended lambing season.

Ewe lambs should be mated in a separate flock from mature ewes. Why? Ewe lambs are less likely than mature ewes to seek the ram when in heat and have a shorter oestrus; consequently there could be a high barren rate if ewe lambs have to compete with adult ewes for the attention of the rams.

Unlike mature ewes, ewe lambs during early and mid pregnancy require a plane of nutrition that sustains a live weight gain (excluding foetal weight) of approximately 80 g/day. This is required to enable ewe lambs reach their normal mature body size.

Consequently, ewe lambs need to have access to high feed value pasture from joining to housing, and require high feed-value silage supplemented with concentrate after housing.

The level of concentrate supplementation depends on silage feed value and expected litter size. Energy is normally the first limiting component in the diet of pregnant ewe lambs.

When formulating a ration for ewe lambs it is essential to make allowances for requirements for maintenance, live-weight gain, wool growth, stage of pregnancy and expected litter size (as determined by ultrasound scanning).

As a general rule, a pregnant ewe lamb requires an extra 2.5 megajoules of ME (metabolizable energy) relative to adult ewes of similar live weight at the same stage of pregnancy and carrying the same litter size.

The additional energy allowance is to facilitate body weight gain.

At Athenry the ewe lambs (most mated in late October/early November) were housed in mid-December, shorn and offered high feed value grass silage (75% DMD) as the sole diet.

In mid-January the pregnant ewe lambs received 200g of concentrate daily. Concentrate allowance was increased to 250g/day in late January.

If the quality of the silage available is poorer than that used at Athenry then increased concentrate supplementation would be required from housing to lambing.

Ewe genotype had a major effect on litter size (difference of 0.39 lambs) and number of lambs reared per ewe lambing (0.31 lambs).

The national average weaning rate for lowland mature ewes in Ireland is 1.2, consequently the performance of the Belclare ewe lambs was close to that achieved from the lowland flock in Ireland.

Mean lamb mortality to weaning was 17%. It is of interest to note that the weight of ewe lambs had a significant effect on productivity.

For example ewes that lambed but failed to rear a lamb were, on average, approximately 7kg lighter at lambing than those that reared at least one lamb.

All lambs had access to up to 300g concentrate daily from five weeks of age until weaning at 14 weeks. Concentrate supplementation ceased at weaning. Lambs from Belclare ewes were on average 2kg lighter than lambs from the >75% Suffolk ewes.

However the Belclare ewes weaned 33% more lamb live weight (due to their larger litter size) per ewe lambing than the >75% Suffolk ewes.

Lamb daily live weight gain was 255, 279 and 269g/day for lambs from the Belclare, Belclare x Suffolk and >75%Suffolk, respectively.

Effect of joining weight of ewe lambs on productivity

Ewe lamb weight at joining influences date of puberty, fertility and pregnancy rate. The effect of live weight of ewe lambs at joining on the probability of rearing at least one live lamb is presented in Figure 1.

The data presented clearly illustrate that increasing live weight at joining increases the probability of rearing a live lamb, but that appropriate live weight is influenced by ewe genotype.

For example to have a 90% chance of rearing a live lamb, the Belclare and >75%-Suffolk ewe lambs would need to be 46 and 60kg at joining, respectively.

This clearly shows that whilst the weight of ewe lambs at joining is important, it is linked to genotype.

Whilst this study is in its infancy half of the ewes in the flock are now 2.5 years of age. Therefore these ewes have lambed at two years of age, half of which were joined as ewe lambs.

These results show that animals joined as ewe lambs were better mothers when lambing at two years of age. The mean weaning rate for two tooth Belclare, Belclare x Suffolk and >75% Suffolk ewes was 1.69, 1.51 and 1.32 lambs per ewe joined respectively.

Therefore weaning rate differed by 0.37 lambs per ewe joined due to ewe genotype.

Ensure lambs are approximately 60 % of mature weight at joining. For the > 75% Suffolk-cross and Belclare lambs 60% mature weight is 50kg and 46kg, respectively.

Use of the ‘ram effect’ can induce cyclicity and will compact mating, and subsequently compacts the lambing season.

Breeding from ewe lambs can yield a high level of productivity (weaning rate) that is close to that recorded for the national lowland adult ewe flock.

Ewe genotype has a big impact on litter size, the number of lambs reared and the weight of lamb weaned.

Preliminary results show that mating ewe lambs does not impact negatively on reproductive performance at two years of age – rather it increases the weight of their progeny at weaning by 2kg. 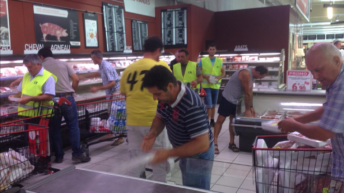