ICA carer up for Mom of the Year 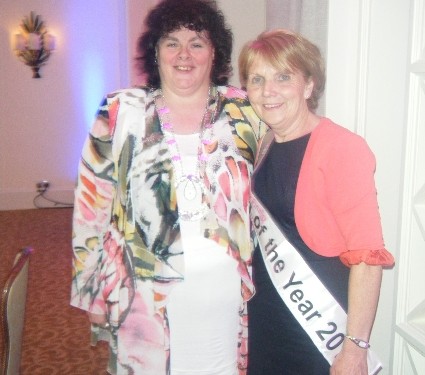 “You are a mother you just get on with it.” These are the wise words of full-time carer and mother Mary Gilbride who survived both bowel cancer and a stroke.

The ICA member has now been nominated by her daughter Caroline for The Women’s Way Lidl Mum of the Year Awards 2013 for showing amazing strength while coping with her own illnesses and being a full time carer for her son George.

National President of the ICA Liz Wall was delighted to meet Mary at the awards and spoke of Mary’s achievement to have reached the national finals.

When Mary was diagnosed with bowel cancer in 2002 her first thought was for her children. One of her sons was in his second year in college and her youngest child was sitting the Leaving Cert. Mary’s daughter Caroline knew the truth about her mother’s illness but together they shielded the younger children from the truth in order to protect them from the stress of dealing with the diagnosis while they were studying.

Mary spent the next few years fighting the cancer and was in and out of hospital six times in three years.  By 2007 she was on the road to recovery and she turned her attention to fundraising for others and ran the Women’s mini-marathon for Our Lady of Lourdes Hospital and St Luke’s Hospital in Rathgar. She also raised money for MS Ireland and Temple Street Children’s hospital.

As Mary was returning to health the family was beset by another tragedy when son George who was only 34 was diagnosed with Primary Progressive Multiple Sclerosis. His illness accelerated and very quickly he was in the final stages of MS.

Mary pulled the whole family together with her can-do attitude and George now lives in a flat built on to Mary’s house and Mary dresses him every morning, washes him, brushes his teeth and spoon feeds him all his meals.

Mary is very humble about the part she plays in caring for George “It’s him I feel for, he is so young, it is hard for him because he has his full senses but you just get on with it,” she said.

Being a full-time carer took its toll and in 2011 Mary had a stroke. Her daughter Caroline said: “To watch your mother take a stroke is heartbreaking. But after a couple of days in hospital Mammy was up and about again smiling.”

When Womens Way asked Mary where she gets her strength, she brushed it off saying: “You are a mother you just get on with it. I had a wonderful aunt who was never in the full of her health but she never complained.”

Mary was delighted and humbled by her nomination as she didn’t know her daughter had put her forward. “Since George got sick, you don’t have time to read newspapers so I didn’t even know it was going on, there are a lot more worthy people out there,” she said.

Open to mums from all over Ireland, 15 special mums have be chosen by Women’s Way to attend the finals at a gala luncheon in Dublin on this June.

Each of the finalists will receive a luxury goodie bag worth €250. The 2013 Woman’s Way & Lidl Mum of the Year will win a fantastic €5000 worth of Lidl vouchers  plus over €2,000 worth of pampering and luxury products.

Pictured National President of the ICA Liz Wall with Mary Gilbride, image courtesy of the ICA