With such focus on the beef industry of late, Agriland has looked at the figures available around exports and found that the value of our beef exports differ significantly between the CSO and Bord Bia.

However, using the same product codes as used by Bord Bia in its calculations, the official CSO figures put a value of €1.73 billion on beef exports, a €364 million difference to the Bord Bia figure.

And this discrepancy between the two sets of figures has been growing since 2009. The discrepancy arises over the value being place on Irish beef exports to the UK and what Bord Bia describes as an ‘underestimation’ by the CSO.

A spokesperson for Bord Bia said: “Based on production, consumption and imports we feel that this is understated in the region of 35,000 tonnes. Therefore, in our analysis we estimate the volume to be 470,000 tonnes and valued at €2.09 billion.” 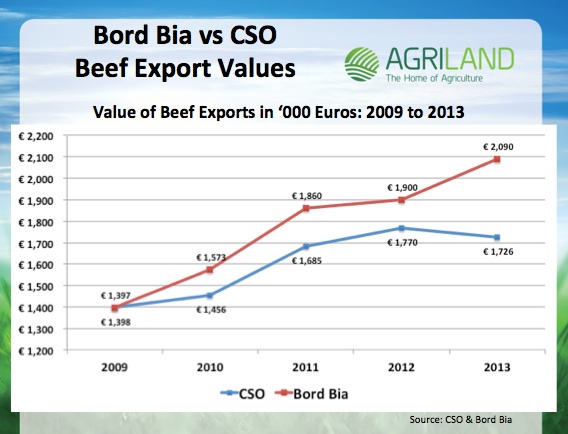 Back in 2009, the CSO export values for Irish beef, and those of Bord Bia, were closely matched at just less than €1,400 million, with just €1 million separating the two sets of export value figures.

This 470,000 tonnes figure is what Bord Bia estimates was exported in 2013. However, utilising the same product codes used by Bord Bia in its calculations, the official CSO figures put a value of €1.73 billion on beef exports, a €364 million difference to the Bord Bia figure. The difference is equivalent to nearly €240 per slaughtered animal, or 90c/kg deadweight.

However, according to the CSO, the values of Irish beef exports are calculated using data correlated and supplied by the Revenue Commissioners, and, Customs and Exise. The difference between the CSO figures and Bord Bia estimates amount to 35,000 tonnes of meat, or an 8% discrepancy in terms of weight. The CSO figures are  corroborated by comparing both Irish Exports and British imports using official EU Comext figures.