Rescuing a Kilkenny cat has seen farmer, Suzanna Crampton, “get the cream as it inspired her to write a new book based on the adventures of her adopted feline, Bodacious.

The tale of ‘Bodacious: The Shepherd Cat’ will be launched at the Book Centre, Kilkenny, next Thursday, June 14 at 6:30pm.

Helen Carroll of RTE programme ‘Ear to the Ground’ will officially launch the book; while Suzanna will read excerpts and sign copies.

Prior to the launch, Suzanna and Bodacious will appear on an episode of ‘Nationwide’ on June 6.

Suzanna, who farms 50ac outside Bennettsbridge, signed a book deal with Harper Collins which bought world rights to the book about Bodacious – a strong-minded, bossy, no-nonsense cat that joined a sheep farm.

The now famous feline – whose meteoric rise to stardom has been widely documented on social media – found his luck turning after Suzanna came across him wandering around a shop in Kilkenny.

A friend told her that he needed to be rescued.

When he wasn’t reclaimed, Suzanna brought him back to join the menagerie of other animals on her Zwartbles sheep farm.

The book is told from Bodacious’ perspective. He takes readers through a year on the farm and highlights the deep bond he has with his new owner.

Having stuck to Suzanna like glue on the farm, she gave him the name ‘Bodacious’ which, she says, is Louisiana slang for ‘bold, beautiful and bolshie.’

The farm has been in Suzanna’s family for seven generations. She studied agriculture in Vermont, in the US, and also studied forestry and wildlife management.

I did my lambing apprenticeship on two different farms here in Ireland, in Wicklow and Carlow, in the early 1980s; but, soon after I left to work in New York, London and south-east Asia

Suzanna returned to Ireland in 1997, the year after her grandmother died.

She took over part of the farm and manages the rest for her mother. Her Zwartbles sheep allowed her to make her mark on social media.

After getting involved in a wool project with Kilkenny arts office and Cushendale Mills, she continued to produce pieces from the dark, rich fibre. She also started to produce Zwartbles bed blankets; as well as traditional travel rugs and knitting yarn.

Having built up a huge following through social media, she has welcomed tour groups from around the globe to her farm. She also continues to produce new products – both from woven fabric and knitted patterns.

When Bodacious joined the fray, he too found a voice on social media as the cat shepherd of @1CatShepherd. He also has his own range of blankets. 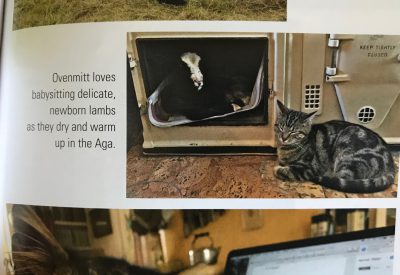 Suzanna said that the book arose from a demand from children around the world – particularly those in hospitals and hospices. They wanted to know more about Bodacious’ adventures.

There was huge interest from literary agents and a bidding war. The advance, which is divided into seven payments, has allowed her to hire help on the farm.

Her writing schedule has seen her change her lambing season to February/March.

She said she is really surprised by the “remarkable and encouraging enthusiasm” of Bodacious’s social media followers.

Their excited anticipation for his book has been humbling. It is thanks to his followers that this book was written.

“It has been an extraordinary year. While farming during this year’s unusually extreme weather I was also writing my first book; this was a challenge,” she said.

“While I lambed through the night of the blizzard ‘Beast from the East’, there were times I had to bring fresh born lambs into the kitchen.

I would sit at our kitchen table, where I wrote and edited the final draft of this book, as frail lambs warmed and came back to life in our Aga warming oven – which can also hatch chicks.

She says the “great thing” about taking on the project is that she can still keep farming.

“I wrote about the highs and lows; living and dying; all the hardships and pleasures of farming livestock. This tale is not a sentimental sugar-coated view of farming.

“Farm life is tough; but also rewarding. I hope to have shown this and I encourage young and old to be interested in farming and embrace the world of nature and importance of agriculture,” Suzanna concluded