Supplies of cattle to the countries’ export meat plants continues to be lower than last year with some 36,000 less cattle killed to date compared to 2014.

Last week alone throughput of cattle at meat plants was some 12% lower at 27,000 head compared to the corresponding week in 2014. 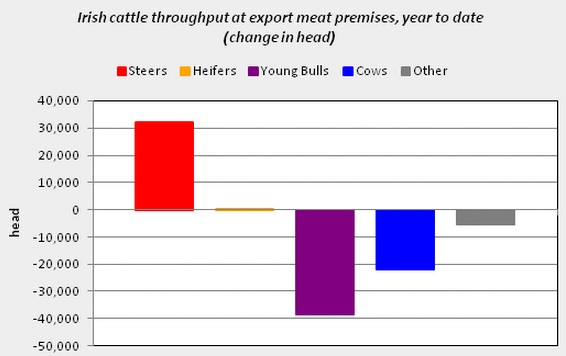 Prime cattle supplies in the UK are also expected to be tighter over next six months according to Quality Meat Scotland (QMS).

The cattle trade has continued its upward momentum this week on the back of continued good demand coupled with tight supplies. Trade was reported as mixed across our key export markets.

The UK cattle trade has seen a notable improvement in recent weeks, according to the ADHB.

At 332.6p/kg the GB all prime average was up over 5p on the week, moving above year earlier levels for the first time this year.

This represents the most significant week-on-week uplift since Christmas last year which gives more confidence to the suggestion that the consistent trend of falling prices for most of this year has now come to an end.