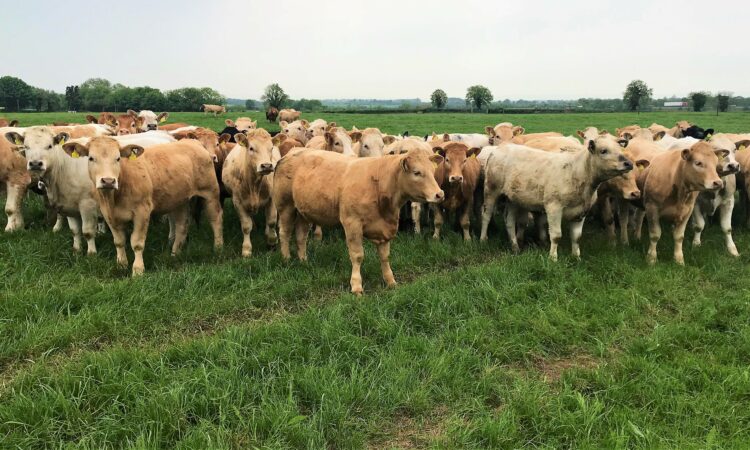 These include: a flock of 160 lambing ewes; 35 sows; and 19ha of cereals. However, the backbone of the entire operation is the beef enterprise.

Some 90 predominately Limousin cross, spring-calving suckler cows are bred to Charolais bulls and all progeny are brought to finish; replacement heifers are purchased off-farm.

230 bulls and 50 additional heifers are also purchased for finishing; bulls are aimed to be finished under 16 months and heifers at 20-22 months.

On Thursday last (May 24), the O’Connors opened the gates of their farm as part of the Irish Grassland Association Beef Conference and Farm Walk, which was sponsored by MSD Animal Health and Mullinahone Co-op.

Thomas – who was the FBD Young Beef Farmer of the Year winner in 2015 – runs a very efficient system with a clear focus on grassland management, breeding and health.

The farm consists of 98ha (242ac) and is divided into three separate parcels. The cattle system is stocked at 3.36LU/ha (livestock units per hectare).

‘The power is in the grazing group’

“The beef farmer in this country is looked down upon, but can grow as much grass as the dairy man and we should be proud of it.

“We shouldn’t envy them, we should be copying them. If they are able to do it, I don’t see why we shouldn’t be.”

These were the words of Thomas as he explained his grassland management system to the large crowd in attendance.

The grazing platform is split into 33 paddocks with an average size of 2ha. These paddocks are further split into smaller parcels depending on the size of the grazing group.

However, the size of the grazing groups is quite unique on the O’Connor’s farm. Four large groups consisting of: 90 suckler cows and 90 calves with four stock bulls; 35 breeding heifers; 104 finishing bulls; and 77 finishing heifers swarm the grazing platform in separate groups.

This is something which Thomas believes is the backbone to his efficient system. On this, he said: “It’s all about grass. Grass is the cheapest feed to invest in and it gives you the quickest return. The power is in the grazing group.

“We have the bones of 400 cattle at grass these days and we have four groups of cattle. I suppose I’m copying what the dairy farmer does and I have big groups which keeps everything simple.

There’s nothing mind blowing about it; it’s simple.

Teagasc’s Fiona Doolan outlined that the paddock system is crucial to the success of the farm. On this, she said: “It’s very easy to make a big paddock smaller, but it’s not so easy to make a small paddock bigger.

“The 2ha paddocks can take the largest group of animals that are on the farm and that’s the 90 suckler cows and calves.

“The paddocks can accommodate any group of animals on the farm. The paddocks are subdivided when there are smaller numbers in there; the subdivisions are crucial,” she explained.

Thomas aims to have paddocks grazed in two days and the cattle are then moved to the next paddock. Surplus bales are also made when covers get too strong for grazing. 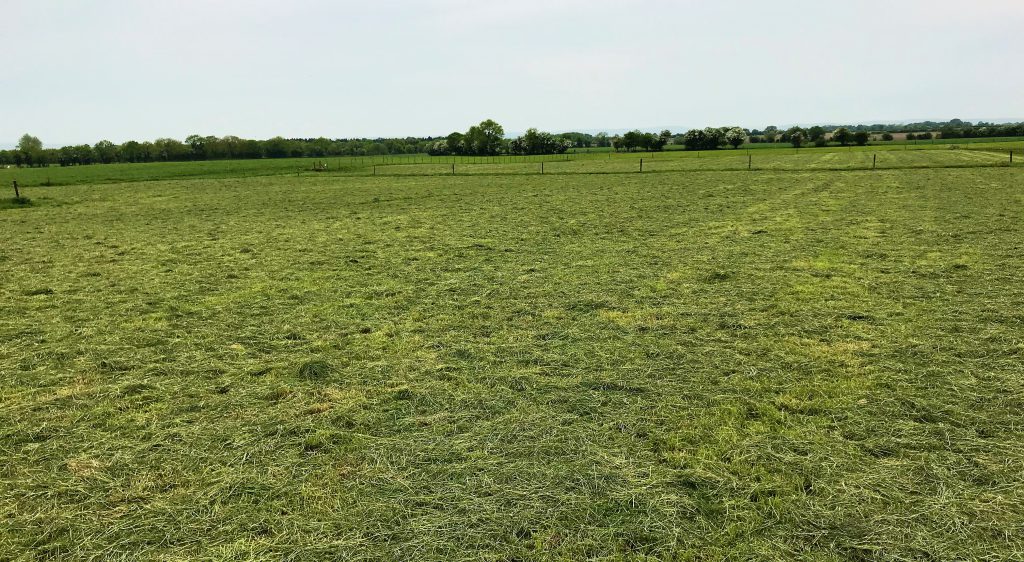 The 104 finishing bulls are rotated around a 40ac parcel and growth has already exceeded demand and paddocks have been mowed for silage.

Even with the significant amount of intensive feeding that is going on on the farm, 75% of the overall diet that is eaten by the cattle is either grazed grass or grass silage.

Fertiliser cost on the farm in 2017 equaled €296/ha. However, Fiona said: “Fertiliser costs were above the national average in 2017; that’s only if you look at it on a per hectare basis.

“Both the stocking rate and output are above the national average, so fertiliser costs were only 17.7c/kg LW (per kilo of liveweight).

“Then I would hope to go with a full bag, so 80 units would be on by April 1 and then aim for 100 units by May; you want the nitrogen in the ground for when the growth comes.

Continuing, he said: “Because I have cattle on slats almost all year round, I have plenty of slurry. I need all the P and K because I’m taking off surplus grass in bales; those bales are the hardest thing on grass.”

When it comes to calving and breeding, the O’Connor’s key performance indicators (KPI) really speak for themselves.

Out of the 91 cows that calved down on the O’Connor’s farm this spring, just three calves had died at 28 days.

Commenting on the strict culling policy, which Thomas implements on the farm, he said: “Anything that is not in calf is gone. If she’s not fertile enough to go in calf, she’s not going to last here as a cow.

She gets no second chance and never will; the cows here are employees of the farm.

“Why would you keep a cow for another year to do nothing; if she has the ability to calve at two years, why would you calve her at three years?” he questioned.

All replacement heifers are sourced off-farm and Thomas plans to use 100% AI; the average replacement index for the heifers on the farm is €113.

Thomas added: “For the last two years I’ve purchased three-quarter bred heifers because they suit the Charolais bulls that we have. I also went for these heifers so I would have more milk in the herd.

“It doesn’t justify keeping a Limousin stock bull just to serve seven or eight heifers. First calvers will go to an easy-calving Limousin and we’re also trying out a red Angus this year.

“The remaining older cows will be served by very terminal Charolais bulls with 5-stars for carcass,” he said.

As Thomas doesn’t breed his own replacements and carries all progeny through to slaughter, he focuses solely on terminal traits and the average terminal index stands at €137.

“I don’t just go for the breed and colour, I also follow the figures. I think if young farmers don’t adapt to the new technology, we’re still going to be in the same place in 20 years time,” he explained.

Furthermore, Thomas admittedly outlined that buying in high numbers of stock is risky in terms of disease. However, a strict health programme is implemented and all animals are dosed accordingly.

118 bulls were slaughtered on the farm in 2017 and the average age of these animals was 16.4 months. The average carcass weight of the bulls was 392kg.

123 heifers were brought to slaughter; they averaged 327kg (carcass weight) and were aged 20.7 months on average.

When asked about expansion, Thomas noted: “We will continue to hover around the 100 cow mark. We used to have higher numbers, but I’ve pulled them back in order to get a better calving interval.

“The home bred cattle are leaving more money in our pockets; our own cattle are more profitable than the bought in stock. 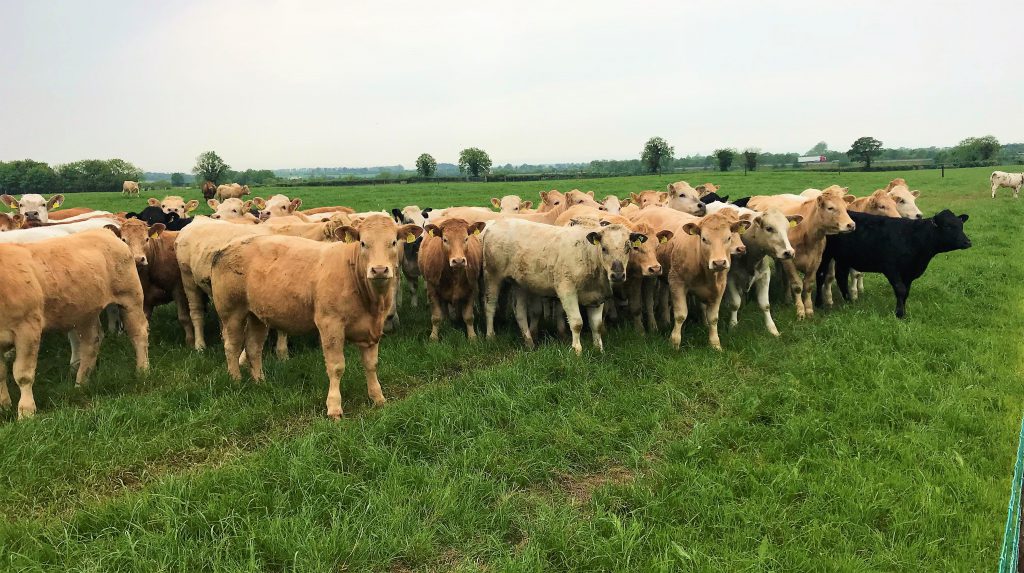 Continuing, he said: “However, how many cows can one man calve down? I would love to go to 150 suckler cows and bring all offspring to beef, but then labour becomes an issue. 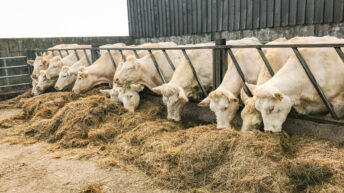