It can be a challenging task to get recognition in the world of pedigree breeding. However, once a herd can get good footing under themselves and start showcasing quality animals, it doesn’t take long for other breeders to sit up and take notice.

In recent years, this has been the case for the McGovern family from Fivemilebourne in Co. Sligo.

Brothers Eoin, Mark and Gareth alongside their sister Kate and parents have made their ‘Crossane‘ herd prefix hit the headlines numerous times.

The herd is small but mighty as it consists of 15 pedigree cows, including 14 Charolais cows and one Simmental cow. The farm is fragmented over 80ac, which is settled beside Lough Gill.

AgriLand spoke with the McGovern family recently to get an insight into operations within the family-run herd.

Prior to 2007, the farm had been operating a suckler-to-weaning enterprise, along with some bullocks being held on for finishing.

Eoin explained that in the year of 2007, he and his brothers were given an option when it came to a new purchase for the farm. He explained:

“Our dad told us that we could either buy a quad bike for the farm or invest in a pedigree heifer.

Buying a pedigree animal is something that we always wanted to do and we were interested in getting into showing cattle – so we decided to purchase a Charolais heifer.

“We still to this date don’t have a quad bike on the farm though,” Eoin joked. 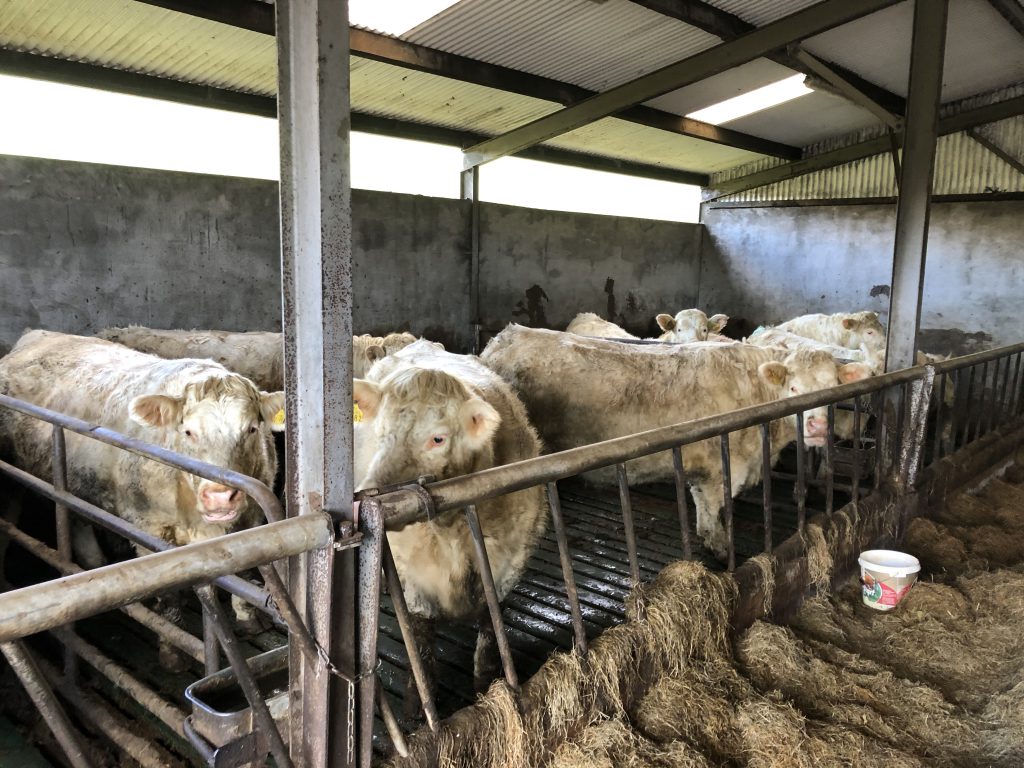 Once the decision was made, the next task for the brothers was to source their animal.

“We went to the Christmas Cracker Sale in Carrick-on-Shannon and bought a heifer sired by CF52 [Doonally New]. She was a lucky cow for us, because her first bull that we sold from her, who was sired by Pirate, sold for €4,000.

Once we achieved that, we were hooked into the pedigree game.

“The reason why we choose the Charolais breed is because they are the market leaders – especially when the time comes for a suckler farmer to sell their weanlings.”

As the herd has been expanding through both breeding their own replacements and purchasing additional females, the McGovern family have been keeping their eye on the ball and focusing on key traits that they want to see in a future cow.

“The first thing we would look for in a breeding female is a good feminine animal, with a good head. An absolute must is that they are functionally correct on their legs. 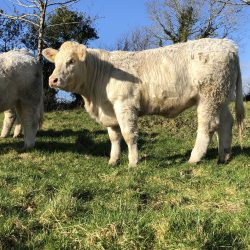 A daughter of Goldstar Echo 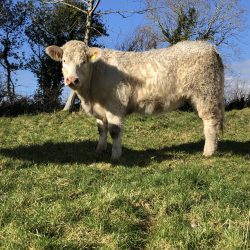 A daughter of Utrillo Mic 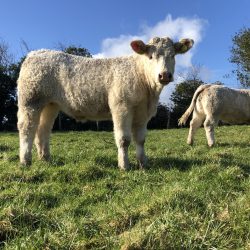 A daughter of Jingle

“We like to have a nice round animal with a deep hind quarter, and have good square plates to match.

“She needs to be capable of carrying a big pedigree Charolais calf and is able to produce the goods with a quality calf.”

Once the female has been identified, the next task is finding a bull to mate with the cows in the herd. There is no main calving time for the herd, as it is split between both autumn and springtime in order to manage calving facilities.

The main attraction for the McGovern family is to use sires from the home country of the Charolais breed.

“A big emphasis on the farm over the past few years is that we have been using a lot of French sires and they have been working out very well for us,” Eoin continued.

We have used the likes of Hercules M, Jingle, Horace JD – some of these new bulls. What really attracts us to them is their growth rates and the vigour when the calves are born. 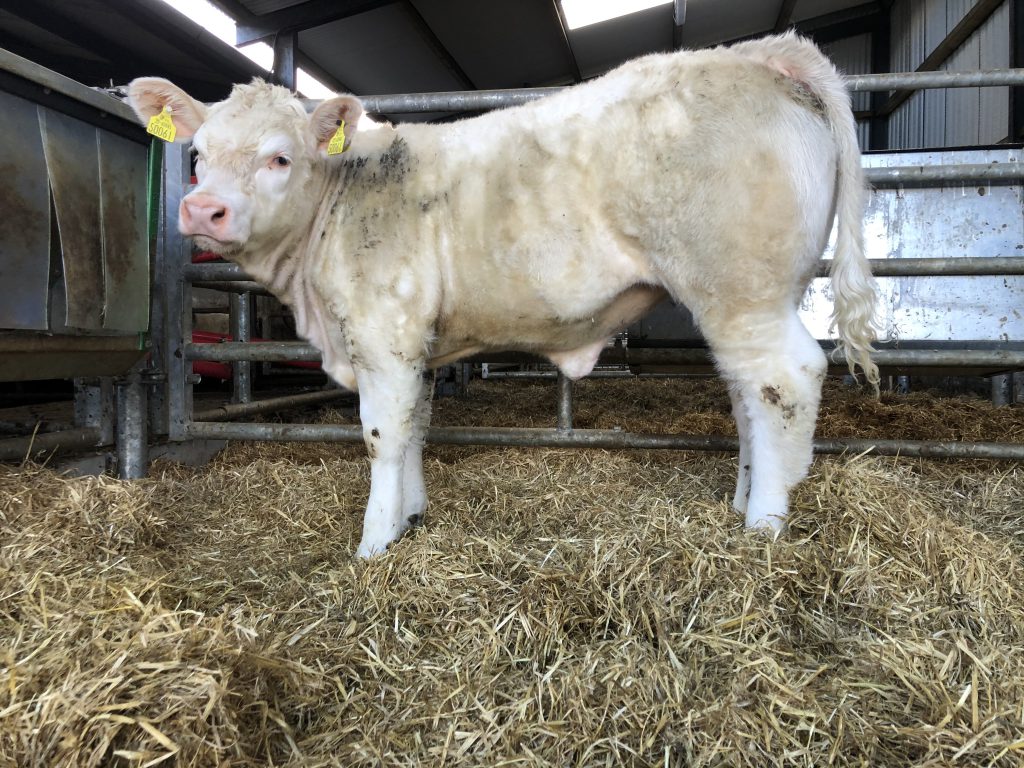 A daughter of Hercules M

“It’s mighty to see a pedigree Charolais calf being up and sucking within minutes. Hopefully then, proof is in the pudding when the heifers from these French sires calve down.”

Along with knowing what they need from their females, the Crossane pedigree herds also have their eye on breeding suitable bulls to match their clients’ requirements.

“Our main customer focus is trying to breed that ideal bull for the suckler farmer market. On the better end of it, we would love to breed a bull that is capable of breeding pedigree cattle and that can be used within a pedigree herd,” Eoin said.

We like to sell locally and at home where it is possible but it’s always great for herd promotion to get out to big sales. 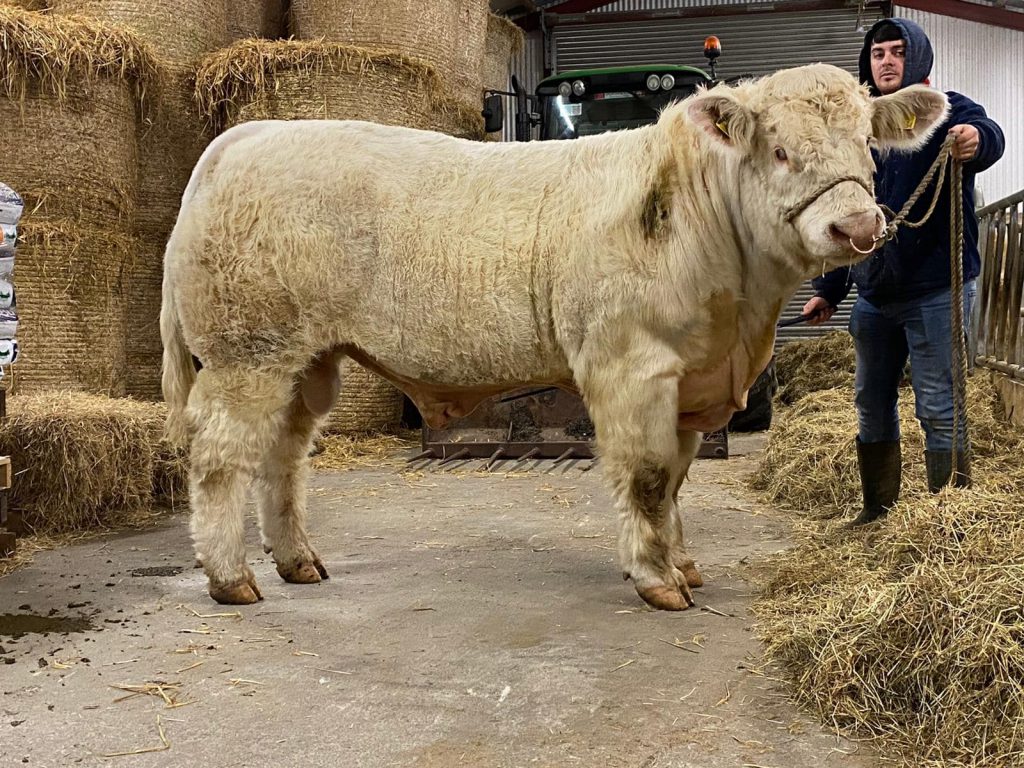 “In the Irish Charolais Christmas Cracker Sale in 2019 we sold two bulls for €6,000 each. The older of the two bulls was awarded Reserve Senior Champion on the day and sold to a pedigree herd in Northern Ireland.”

As much as they may like to keep all of the females which they have bred, due to the restrictions placed on herd size, some females are destined for selling also. 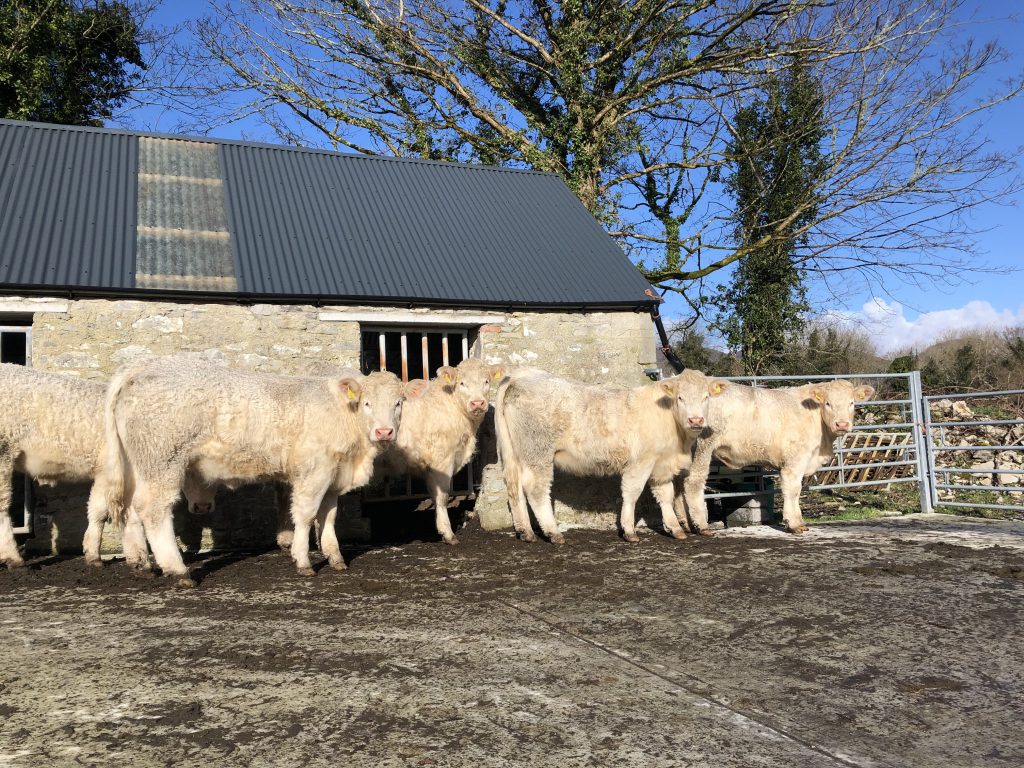 “From the heifers that we are selling, over the years we have sold two heifers locally, which is great to see other farmers getting into the breed.

“Our main focus with pedigree heifers is obviously the pedigree market. We would love to see a heifer that we produce go on and breed a champion for someone else.”

Keeping that statement in mind, one female that the McGovern family has sold, named Crossane4 Milly, went on to breed a bull that was awarded the Reserve Senior Championship at the Irish Charolais Premier Sale in 2020.

As soon as you walk into the McGovern’s shed, it’s clear to see one female standing out as getting priority treatment. This female – Crossane4 Niamh – proved to be one of the herd’s most successful females and was an unstoppable force on the show season during 2019.

This cow is the pride and joy for young Kate McGovern who was quick to point out the achievements this special female had won. She stated:

In 2019, we showed Niamh at the Tullamore Show and she won the Overall [Pedigree Charolais] Championship.

Kate noted that due to there being no showing in Tullamore last year, she is still the reigning champion.

It was a special day for winning the overall title, as Charolais breeders from across the world were present at the Tullamore Show for the World Charolais Technical Congress held in August 2019. 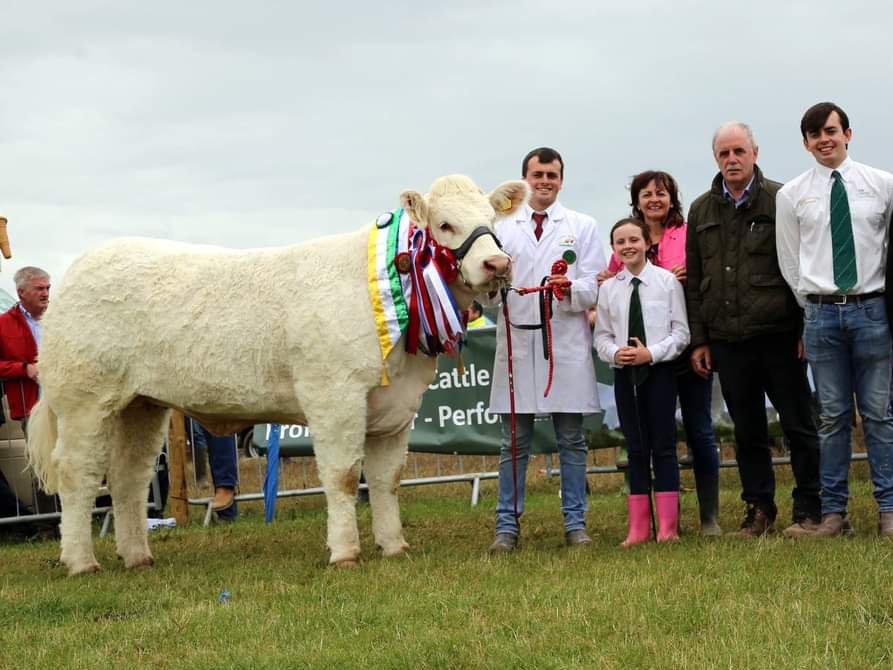 This success didn’t happen over night, as Eoin remembered back to 2019 when he stated that he washed Niamh nearly every day from December until the day of the Tullamore Show – just to get her hair in perfect condition for grooming.

The family decided to flush Niamh last year and they successfully retrieved embryos crossed with the maternal Charolais sire Jumper.

Taking on the Simmental breed

In 2018, the McGovern family made the decision to expand the breeds on the farm and invested in a pedigree Simmental heifer ‘Lissadell Just the One’. 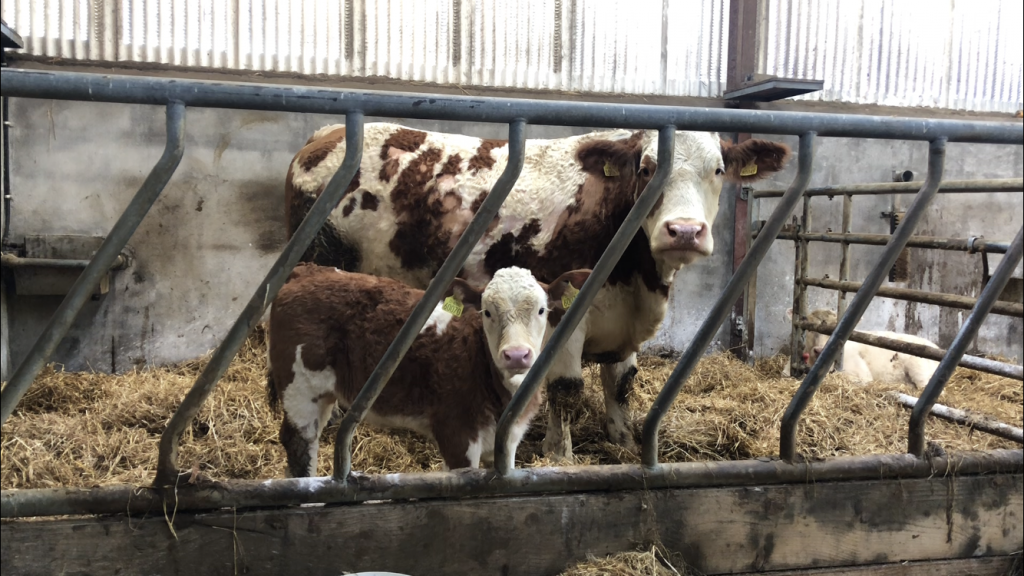 This Simmental female also had a successful show career and has her first heifer calf at foot.

Eoin stated: “We don’t plan on buying another Simmental heifer for the time being, we are just going to keep breeding from Lissadell Just the One and retain some heifers from her.”

The plan for the future is to have the herd remaining at current levels it seems. Eoin said:

“Going forward, we don’t see ourselves expanding cow numbers greatly. As we all work off the farm as well, it wouldn’t be possible to expand. 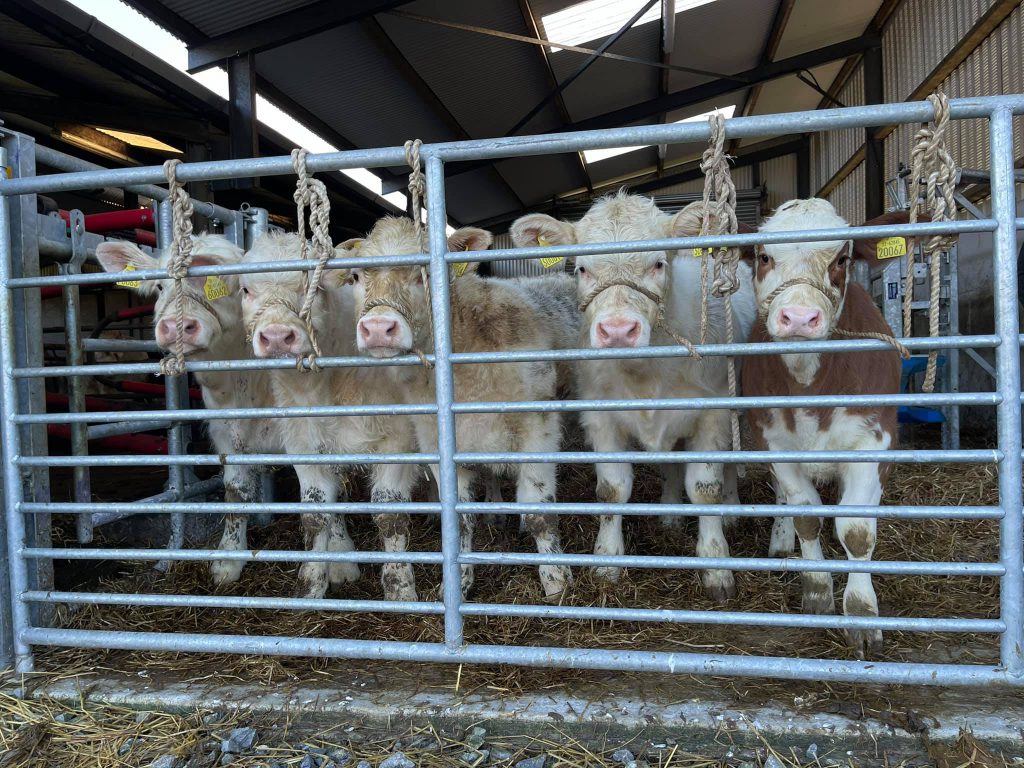 “We just want to improve quality and produce the best quality pedigree cattle that we can year-on-year,” he concluded.