Unlike wheat, where septoria stands head and shoulders above any other disease threat, barley can be inflicted with any one or a selection of diseases, depending on variety, sowing date and general environmental conditions.

Some of the key barley diseases present challenges to our current fungicide chemistry and what worked in the past may not work as well now. Add in brackling (fungicides have a significant effect) and it is clear that a robust disease control programme is necessary on barley crops.

ELATUS™ Era, from Syngenta, combines the company’s latest foliar SDHI fungicide SOLATENOL™ and the leading barley triazole prothioconazole, which together deliver a full range of disease control and brackling reduction on barley.

“SDHI plus triazole fungicides, such as ELATUS™ Era, are the backbone of disease control programmes on barley,” stated Billy Cotter of Syngenta.

He added: “They control the headline diseases of rhynchosporium, ramularia and net blotch. ELATUS™ Era is also effective on brown rust, eyespot and mildew”.

A broad-spectrum fungicide, like ELATUS™ Era, fits at either T1 or T2 timings on barley (only one application allowed per crop). This combination of disease control and brackling reduction sets the platform for high-yielding and high-quality crops.

ELATUS™ Era delivers a combination of curative activity with long persistence against rhynchosporium.

Net blotch is an increasingly difficult disease to control, with confirmed insensitivity to strobilurin chemistry and indications of sensitivity shifts to SDHI fungicides.

Billy stated: “There are reports of net blotch strains with reduced sensitivity to SDHIs on the continent, but these do not appear to be significant in the Irish population yet.”

Despite this, Billy advises growers to treat the disease at the early stages of infection with ELATUS™ Era, which provides the highest available level of protection against net blotch.

Ramularia has become a more challenging disease in recent years.

Bravo is essential for effective protection against ramularia. Syngenta’s advice on winter and spring barley is to use Bravo in the final spray at least.

“Winter barley probably justifies another application in an earlier spray and if there is a high ramularia threat in winter barley, then we suggest adding Bravo to the T1 fungicide spray in spring barley also,” Billy noted.

Brown rust has only featured occasionally in recent years. ELATUS™ Era is also an excellent rust fungicide and delivers top level control of the disease in barley. In addition, at T1, eyespot is reduced and mildew prevention is also a strong feature of the product.

Brackling is a growing problem on barley in recent years. This is partially due to breeding for yield benefit, without accompanying this characteristic with straw strength improvement.

A combination of nutrition, growth regulation and fungicides is required to minimise brackling. Billy said: “As well as excellent disease control, ELATUS™ Era has proven effective in reducing brackling.

“This was consistently seen in our trials and growers commented very favourably from the first year of commercial use in 2017.”

Getting the Best Results

It should be noted that growers or advisors should adjust the rate of ELATUS™ Era to fit the disease pressure. 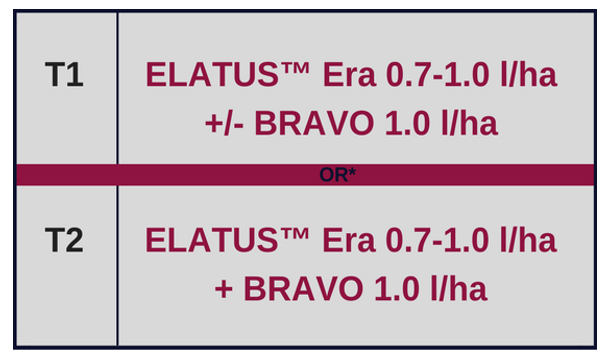