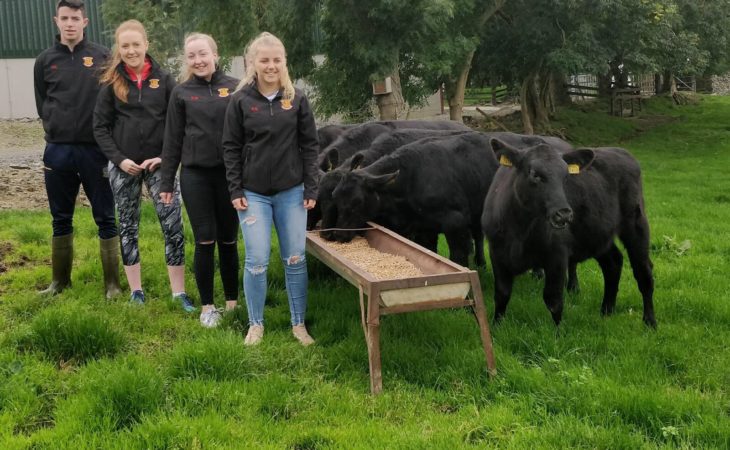 Four Meath students are promoting the viability of Irish Angus cross for the dairy herd to local dairy farmers at discussion groups and marts.

The competition is run by the Irish Angus Producer Group and its processing partners Kepak and ABP.

Seven months after a video submission, an interview process and a presentation in Croke Park, the group were chosen as one of the five finalists.

“We are the only school from the east coast to be one of the finalists in the 2017/2018 competition. The prize for all of the five final schools was five Irish Angus calves,” said Hannah.

Last September, the group travelled to the National Ploughing Championships in Tullamore, Co. Offaly, where they represented their school and the Irish Angus Producer Group.

“We were presented with our five Irish Angus calves which we are currently rearing until they are slaughtered in November of this year,” she said.

Due to the fact that the Irish Angus are an early maturing breed, the students highlighted that they can be slaughtered at an early age.

Therefore they will not produce as much methane gas as the larger continental breeds.

“Methane is one of the largest contributors to global warming which leads to climate change which is very topical issue in Irish society and around the world at the moment.

“We have already visited local agricultural shows to promote our theme; the benefits of using the Irish Angus breed and of eating Irish Angus beef.

“Grass-fed certified Irish Angus beef is high in protein and only contains 10% fat which is ideal for people involved in sport.

“It also has the essential vitamins and minerals which we need for development of our bodies,” said Hannah.

The students – who also run Instagram and Facebook pages to update followers on their progress – say they were attracted by the practical nature of the competition.

This was the first year the school had ever been involved in this competition. We were a very balanced group as both David and I come from farming backgrounds; Kellie and Ella don’t.

The contenders say taking part in the competition has also been a great advantage to their studies. They are all studying agricultural science for the Leaving Cert.

“The competition has been a wonderful learning curve for us all. From the very beginning of the competition we have gained so much knowledge on what goes on in the beef industry in Ireland and the complete process from ‘gate to plate.’

This project has really opened our eyes to all the work involved in both rearing cattle for the beef industry; as well as the processing it goes through for it reach our dinner plates in the form of roast beef dinners and sirloin steaks.

They have also gained key skills throughout the course of the project.

“So far throughout the course of the competition, we have been promoting our project in various ways including local media and social media; as well as through visiting local agricultural shows such as the Oldcastle Show.

“We also held a school barbecue and visited local national schools,” she said.

On the final stretch

Over the remaining months of the project; the group hope to promote their theme in both Meath and the Greater Dublin Area.

“There is a huge population of dairy farmers in our area and we hope we can give them a better insight into the benefits of using Irish Angus,” said Hannah. 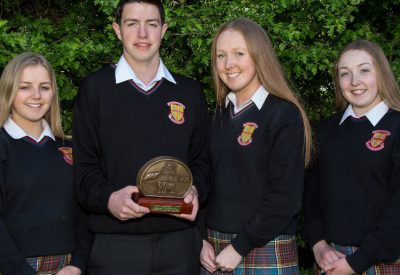 “Some of the benefits include their ease of calving and short gestation period. They are a very docile breed and are early maturing which makes for young and very tender beef with marbling.

“They are also naturally polled which can reduce both labour and financial costs,” she said.

The group also emphasised that the Irish Angus are well suited to the Irish climate as they are “a hardy breed” and can graze up to 300 days a year.

“Ireland is at the perfect latitude for sustainable grass growth and the Irish Angus can utilise the grass very well.

“We also hope to promote certified Irish Angus as a beef brand so that it becomes a popular product for the consumers of Ashbourne and the surrounding areas,” Hannah said.

Our calves are thriving. We hope that they can progress even further as we approach the summer months.

“We are very grateful to Kepak, ABP and the Irish Angus Producer Group for the opportunities that have been granted to us so far during the competition.

“We were lucky enough to go to Amsterdam back in February to see how certified Irish Angus is marketed and sold in the Netherlands; as well as seeing a meat processing factory and a veal farm.

“We are really looking forward to the rest of the competition,” she said. 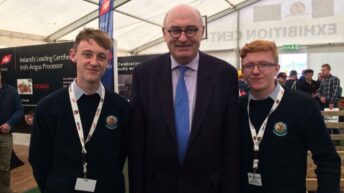 Students strike a chord with farmers on mental health awareness