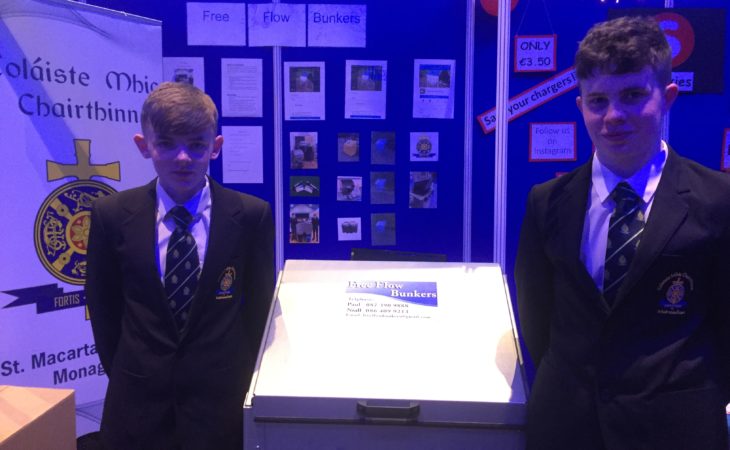 Paul McPhillips, from a suckler and equestrian farm, and Niall Corrigan, from a beef farm, are both 16 and transition year students at St. Macartan’s College in Monaghan.

Paul said their bunkers “efficiently dispatch” different materials such as coal and a variety of animal feed.

“The idea was to design a bunker that is easy to fill, simple to dispense and user friendly – meaning all age groups can operate it.

“It has a capacity to hold 125 kilos,” said Paul who has a keen interest in engineering and plans to study it in college.

Our product removes the manual labour of having to shovel coal or animal feed into a bucket.

“It reduces the workload greatly because all the user has to do is to lift the chute and the material will flow out freely.

“We wanted it to be rodent, water and rust-proof, and extremely durable,” he explained. 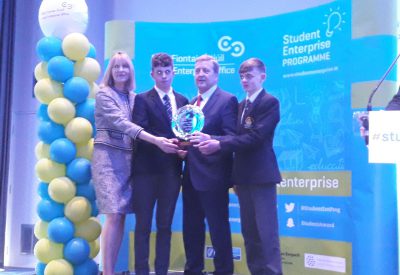 Paul said that feedback from his grandparents – who were unable to stoop down to take coal out of their coal bunker – helped inspire the idea for the product.

He said his father, Damien, had also complained about meal spilling when feeding livestock.

The product is made from lightweight but durable 2mm galvanised steel that comes in flatpack. According to Paul, it can be assembled in under 40 minutes by the consumer.

The product was created on the SolidWorks design package. After tweaking the design, the students approached McAree Engineering to laser-cut and fold the components.

“There has been a lot of positive interest from the farming community and the product has been sold locally,” said Paul who works part-time in CombiLift. 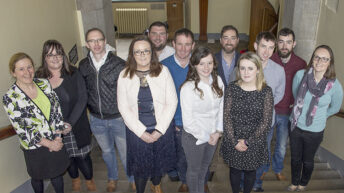