Back in focus: Suckler and beef-finishing unit all under the one roof in Co. Kildare

In today’s back in focus is this new beef-finishing unit that AgriLand paid a visit to – last September – on the farm of Trevor Cooke in Co. Kildare.

The part-time beef farmer – from Mullaghmoyne – felt it was time to build his own facilities – after years of renting an old drystock shed down the road from his home – in order to run the enterprise efficiently.

The Kildare-based farmer also works full time off the farm – as an agronomist – for National Agrochemical Distributors Ltd (NAD).

Farming 30ac and renting a further 15ac, Trevor carries a herd of 12 suckler cows; 12 calves; and a Limousin bull.

Furthermore, Trevor also purchases weanlings bulls in the autumn to finish for the factory the following spring.

Generally, he used to finish all of his cattle except for some of his heifers, which he sold to his brother – who is a full-time farmer.

The farm operates a spring-calving system, with all the cows being served by a Limousin bull.

However, with the new build, Trevor plans to increase cow numbers by holding onto his heifers. The bull calves will continue to be fattened and killed under 16 months-of-age or castrated and finished as steers.

Furthermore, land which was sown with winter barley last year has been reseeded with a grass-seed mix, which cows will graze before being housed for the winter, weather depending. 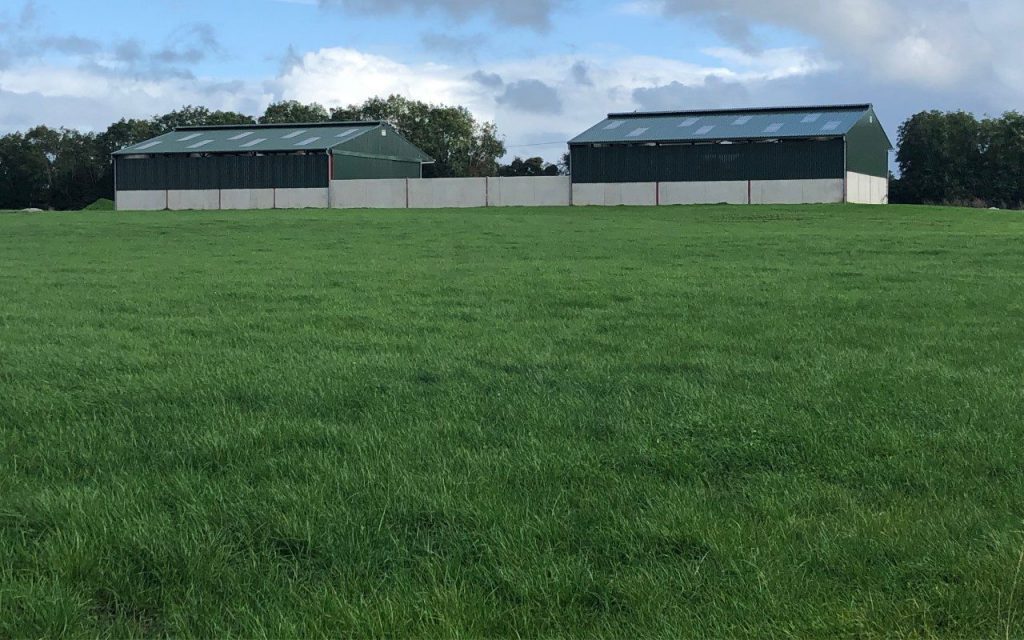 Land reseeded this year beside the new housing facilities

After deciding on a greenfield site, the next task was to begin the build. Trevor made contact with Aidan Kelly – from Agri Design and Planning Services – who designed the project.

The build began last August, 2018, and was completed by the end of December.

The design includes: a four-bay slatted unit; with a loose straw area; double-up feeding passageway; a lie-back area; and a calving pen.

With Trevor planning to expand the herd in the future, there is plenty of room in the build to allow for this increase.

To facilitate this progress and create more slurry storage, a 19.2m long and 5.5m wide tank was installed; the unit also has a 4.5m lie-back area. 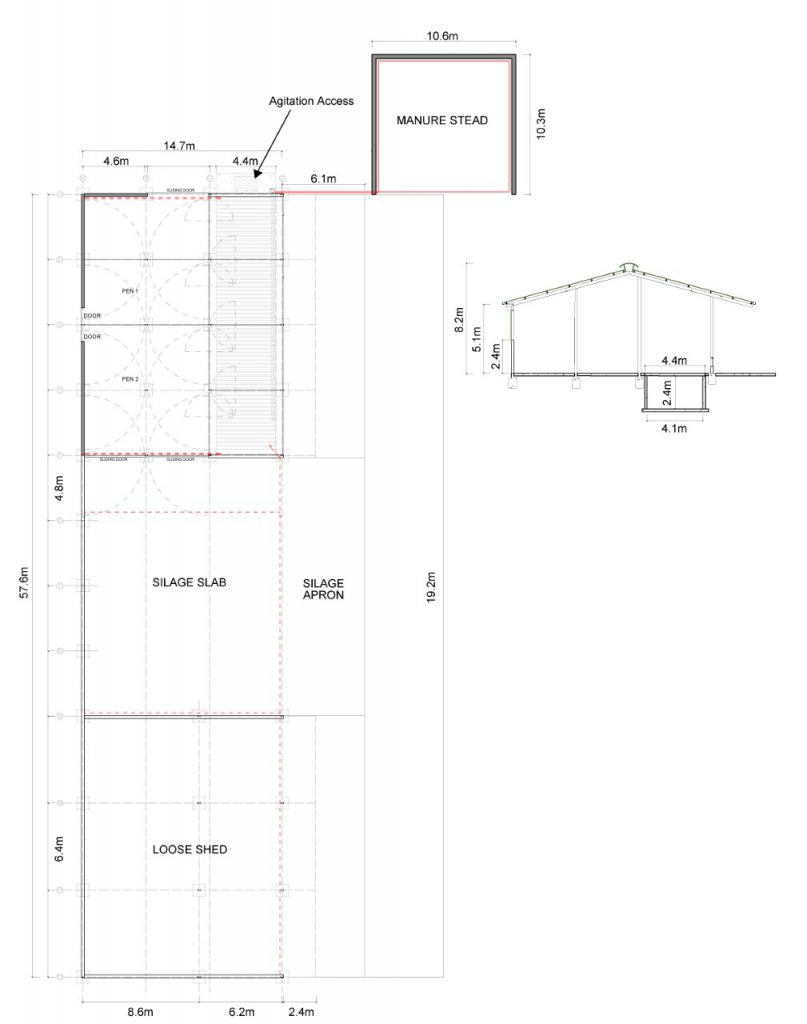 “I can fit eight bulls comfortably in one pen. With this shed, if I were to make the pens the width of the building [13.4m] – I would easily fit 65 cattle.”

There is a silage apron of 2.4m, where the silage is fed to the cattle.

If Trevor decides to, the feeding passage in the middle of the building can be taken out as the gates are interchangeable and can create a lie-back area measuring 9.0m long. 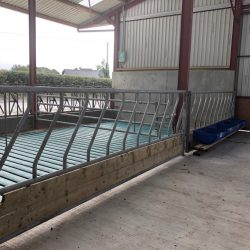 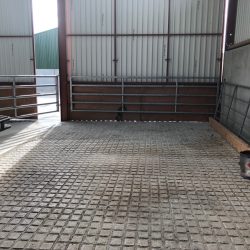 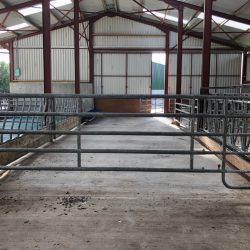 Trevor said that he had to ‘bite the bullet’ with regards to installing some extra features, which he says are “just a necessity on farms if you want to handle cattle safely”.

The design includes headlock gates and a calving gate, which he says “has been well worth the investment”.

“If I have to dose cows or handle a sick calf in the pen, all I have to do is throw some concentrates in front of them and they’re locked in and I can work safely among them.

“The calving gate is also a great addition. The shed is designed that all the gates are interchangeable which makes it easy to move the cows where you want to and to be able to handle them safely; for example, when they are about to calve.” 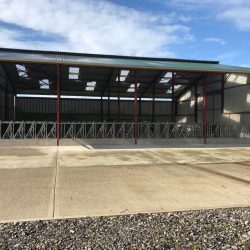 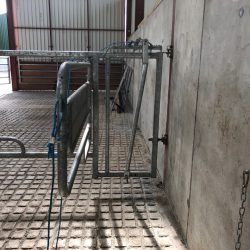 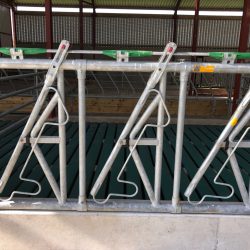 The build also includes a creep gate for calves to access the cows in the slatted pens and a lie-back area at the back of the shed.

There are two sliding doors on either side of the shed. At some stage, Trevor plans to build a crush and collecting area at the side of the unit.

However, at the moment, Trevor is using his brother’s mobile crush for any jobs he needs to carry out.

One of the main highlights of this build is the rubber mats in the slatted unit which, Trevor says, is a “terrific job”.

“They were expensive to install, but they were well worth the extra investment.” 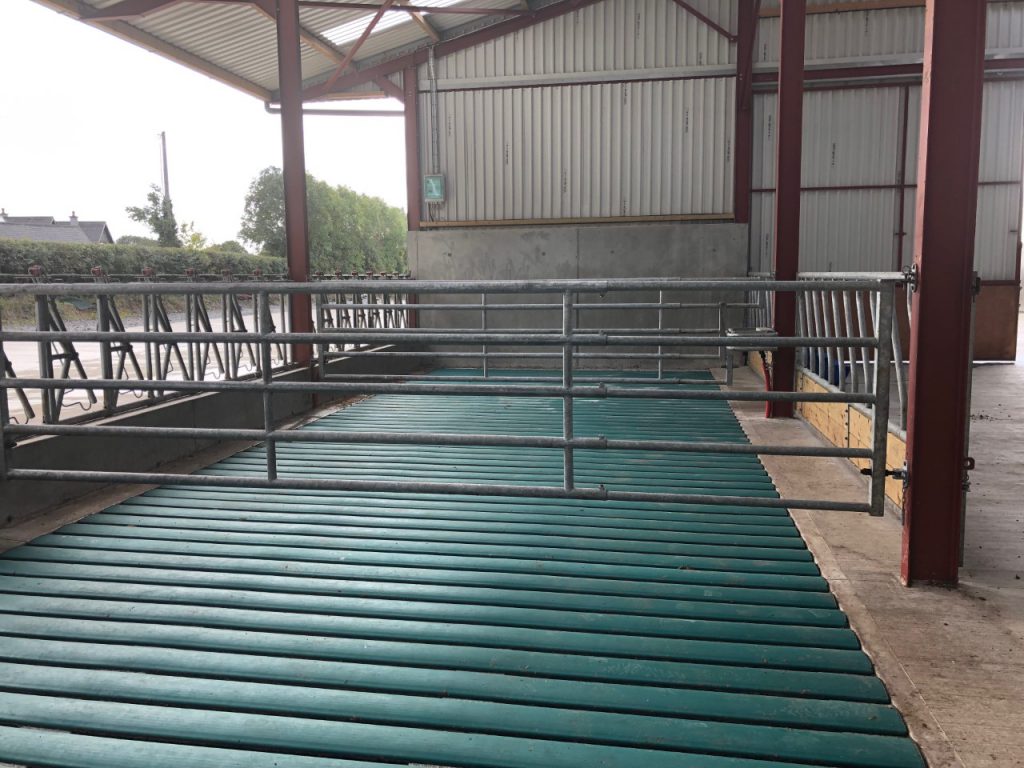 Rubber mats in the slatted unit

Also included in the design is a storage facility that can double up as a cattle shed.

In time, if I increase cattle numbers, I can feed the bulls in this shed and keep them away from the cows.

“The bulls are fed ab-lib concentrates, with straw supplemented as roughage.”

At the moment, all of Trevor’s machinery and hay bales are stored in this shed.

At the side of the storage shed, Trevor plans to install a water-collecting tank that will store the rainwater flowing down from the shed.

A dung stead was also incorporated into the design; it is 10.3m long and 10.6m wide. 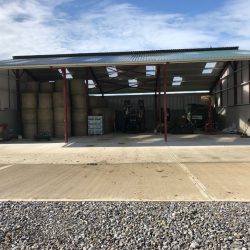 Storage facility which can double up as a cattle shed 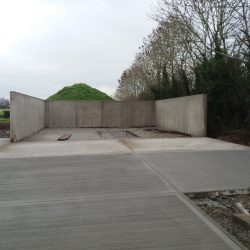 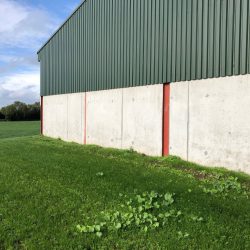 The shed was built at the back of a field, so a roadway had to be constructed from the main road as far as the entrance to the sheds.

Trevor plans to fence along the roadway before winter housing, as he hopes to graze the field before the cows are housed. 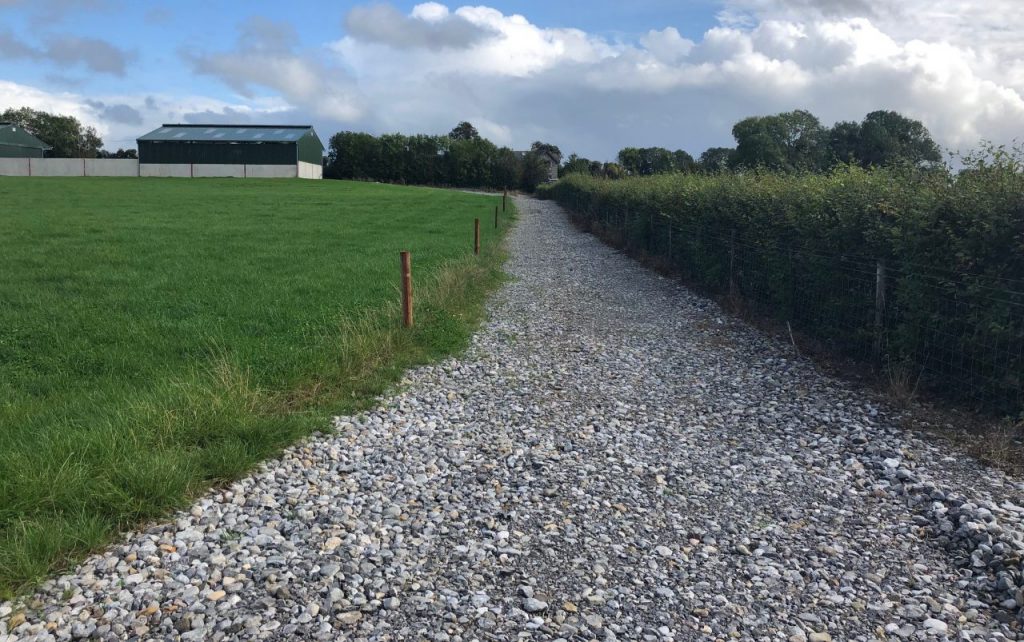 New roadway which leads into the farmyard

Commenting on the build, Trevor said: “I am very happy with how it turned out. I have to say everyone involved in the build did an excellent job.

“I had a fair idea of what sort of a unit I wanted to build and credit goes to Aidan for designing it.

“Furthermore, TG Construction and O’Dwyer Steel did a fantastic job. I went on holidays for a week and let the guys work away; they kept in touch with me all the time, sending me pictures of the build and making sure I was happy with it,” Trevor concluded.

Thinking about installing cubicles? Here's what you need to know...

Wearing gloves to reduce bacteria spread and protect your hands