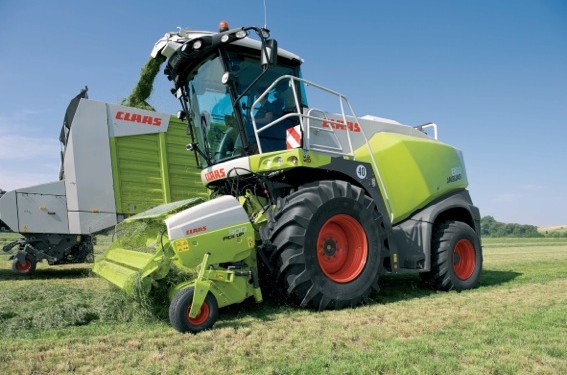 After its award-winning appearance at Agritechnica last month Claas will again feature the Axion 800 series tractor at their LAMMA stand in January in the UK.

According to Claas, it is also featuring at the event new machines including the new Jaguar 800 series forage harvester and the new range of high output Scorpion telehandlers.

The new Axion 800 range of tractors are powered by FPT Cursor 9 engines. Claas say it is the first tractors on the market to meet TIER 4 final emissions regulations. Four models are available, all with the option of power outputs ranging from 215hp up to 264hp.

Class claims its engine management system is designed to maximise engine performance, but not at the expense of fuel consumption. At a recent test it says the Axion 850 averaged just 248 g/kwh the lowest fuel consumption of any 200-270hp tractor tested.

The new Jaguar 800 series will also feature at the show. There are four models are available in the series with power outputs from 400 to 598hp. Class say a new panel design provides enhanced ease of access for servicing, whilst a new cab provides greater operator comfort and visibility.

Claas says the Jaguar’s new vista cab. A novel feature of its control system is that the operator can now set a reminder as to when the knives need sharpening or the shearbar adjusting after a set operating time has elapsed.

It also notes that a new quick attachment coupler allows header units from the Jaguar 900 range, to be used.

All models are available as 20 km/h, 30 km/h and 40 km/h versions and have new 4-cylinder Deutz engines.