The average Irish R3 heifer price is back 9.2c/kg from the 400.3c/kg paid in the week ending September 20, 2015, the latest figures from the Livestock and Meat Commission (LMC) show.

This latest heifer price placed it 0.4c/kg above the EU average price and 43.9c/kg lower than the equivalent price in Northern Ireland.

This latest heifer price is back 15.5c/kg from 450.4c/kg in the week ending September 20, however, the North continues to hold second place on the league table.

Looking to Britain, which retains the number one spot on the league table, the average R3 heifer price was the equivalent price of 475.2c/kg for the week ending October 18, 2015.

This was a decrease of 12.5c/kg compared to week ending September 20, when the heifer price was the equivalent of 487.7c/kg. 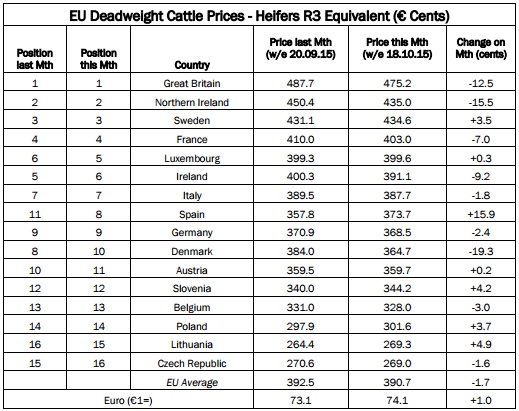