‘As long as I can get my bulls away, I won’t go away from that beef system’

While the atmosphere in Kilkenny on Tuesday night last, for a beef seminar organised by Teagasc and the Irish Farmers’ Association (IFA), was far from positive from a beef farmer’s perspective, glimmers of hope emerged during a panel discussion.

The panel involved three local farmers: James Madigan; Brian Blackmore; and Sean Power. Each run different systems in their own right, but to a high level of efficiency.

James Madigan runs a herd of 100 suckler cows and brings all progeny to beef. The bulls are aimed to be finished under-16 months (90%), while the heifers are slaughtered from 18 to 22 months.

Over the past five years, James has driven cow numbers from 80 to 100 head (spring and autumn calving) and moved from a 24-month steer system to the bull-beef operation. An additional 50-60 bulls are purchased in the summer time destined for slaughter.

Telling his story, he said: “We were doing very well with the bulls up to this year; the farm has been running very well. However, I didn’t buy in any this year due to the uncertainty. Next year if things settle down, I’ll go back buying.

As long as I can get my bulls away, I won’t go away from that system.

“I’m not changing system and I’m not going dairy farming. I’m not a dairy farmer; I’m a beef farmer. That’s what I was bred to do and that’s what I’m going to stay doing.

“But, saying that, if any of my children in 10 years’ time say they want to go milking, I’m not going to stand in their way,” he told Teagasc’s Terry Carroll, who chaired the discussion.

James runs the farm to a high level of efficiency, maximising the proportion of grass in the diet. The best of James’ bulls are finished at 14 months and would weigh approximately 500kg coming off the cow, he said. 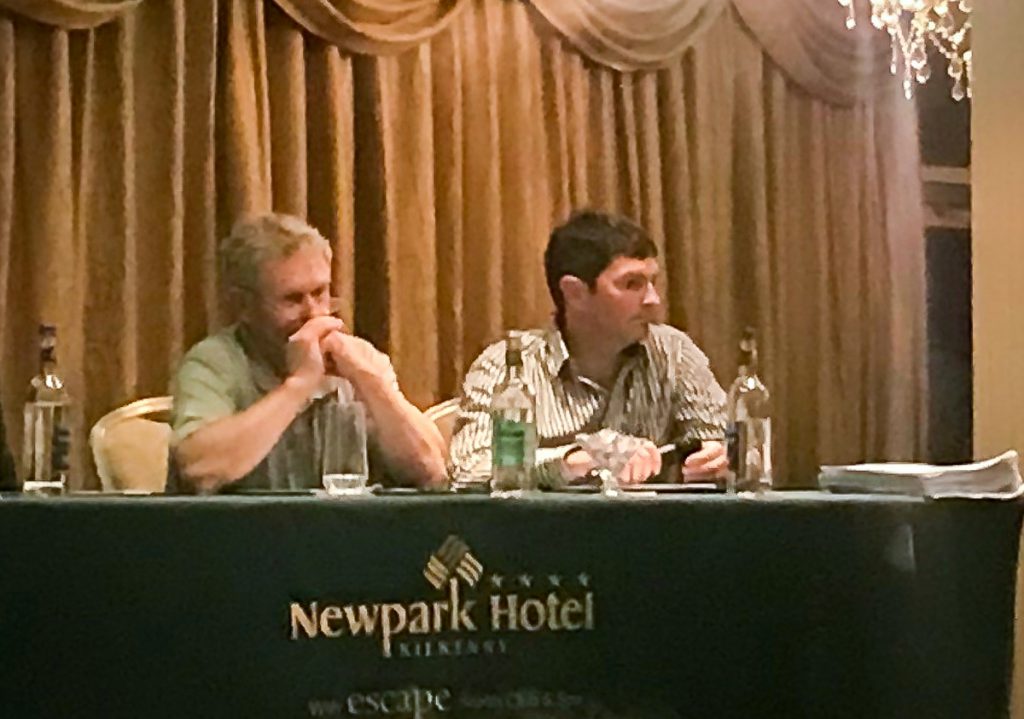 The heifers kill into a 350kg carcass, with the bulls hitting 400kg (deadweight). James noted that despite the weather conditions experienced in 2018, it was his best year since he began farming 12 years ago.

Commenting on his plan for the short-to-medium term, he said: “We have to stay going. You have to stay at your grass and your soil fertility every year.

“But, in this current climate, you have to draw the line on spend. If you could keep your head down for a year or two and tip away, it would probably be the most sensible thing,” he concluded.

Sean Power and his son Eamon run a beef finishing operation alongside a sheep enterprise. The father-and-son duo slaughter over 500 head of cattle, along with 500 store lambs; they also lamb 200 ewes.

Over the past five years, Sean has driven output of beef on the farm which has resulted in more kilograms of beef going out the farm gate.

Reflecting on 2018, he said: “Last year was hard because of the weather. This year, with the exception of price, it is a lot easier to work and the cattle are thriving and the grass is there. But the price is awful.”

Half of the heifers on the farm are finished off grass and the other half are finished out of the shed. The heifers earmarked for finishing will be housed in late September or early October.

Similarly to James, Sean has ceased buying cattle for the moment due to the uncertainty surrounding the beef game.

“The plan for the winter is already in place; the cattle have to go in and they have to be fed. I’d love to buy more cattle; that’s what I love about it and I always enjoyed it.

“I hope to be able to continue to do it. It’s terrible to hear people saying: ‘I have to give up’. It’s a sad scenario when people out there have built up to a certain level, and then you hear: ‘I have no way out, only to get out’.

“It’s great to hear the likes of James as a suckler farmer saying that he is positive, and that stems from the fact he is so efficient and so good at what he does,” Sean explained.

We wouldn’t like to cut back. I’m going to try as long as I can to stay doing what we’re doing.

Again, like James, Sean plans to “batten down the hatches” and keep his head down. A new handling unit has been put on hold, but he may explore the idea of finishing cull cows in future.

“There’s a lot of cull cows available. So, we’ve been looking at this over the last couple of months. Maybe if the heifer thing went unworkable, at least the raw material will be available,” he concluded.

Brian Black was originally a suckler farmer, running a herd of 65-75 suckler cows in 2013. However, these cows have since been phased out and a calf-to-store operation was introduced on the farm.

In addition, after attending numerous meetings on contract rearing of dairy heifer calves, an opportunity presented itself from a neighbouring farmer. He now rears 105 heifer calves alongside his own calves, which he originally sold as stores.

Brian might explore the idea of bringing his own calves to beef, now that he has the space to do so.

“I might go two-thirds contract rearing and keep one-third of my own calves. I plan to get more out of grass. In the contract rearing enterprise I have targets, and the more I can do in the summer, the less I will have to give them over the winter when they’re housed,” Brian said.