Are low grass covers exposing your herd to sudden death? 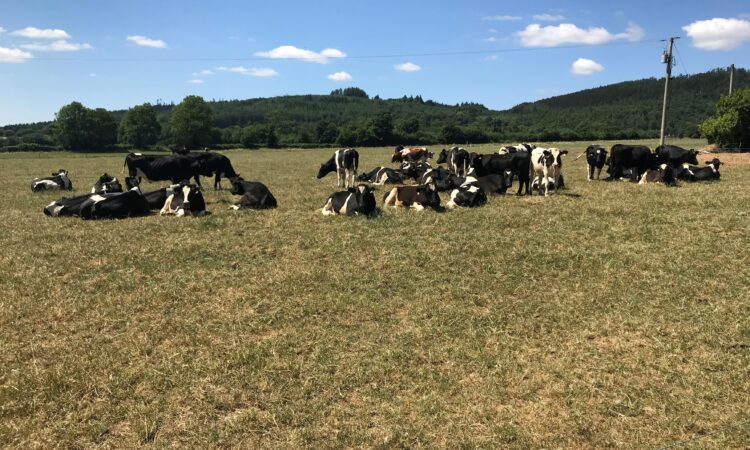 Unfortunately, 2018 has been a year of challenge after challenge. Grass growth remains extremely low for this time of year and – although spells of rain are forecast – a significant amount of rainfall is needed to replenish the soil moisture deficit.

The challenge at the moment is to keep cattle fed despite bare grassland across the majority of the country. A number of vets and farmers have reported sudden deaths in cattle at pasture in recent days.

Clostridial diseases are being diagnosed as the route cause of these deaths following exposure to bacteria in the soil where cattle are grazing bare grassland.

In unprotected herds, the risk of disease – due to clostridial pathogens – is present all year round. Clostridial infections in cattle are caused by a group of bacteria that exist in soil, on fields, within buildings and in the tissue and intestines of cattle.

Clostridial bacteria remain dormant and effectively harmless in the form of highly resistant spores that can survive for many years in the environment.

The warm, damp soil of Ireland predisposes animals to high levels of disease and farmers are encouraged to vaccinate effectively to control this constant threat.

As the most common presenting sign of these diseases is sudden – often sporadic death – the confirmation of the exact aetiology can be difficult as the presenting signs are similar to deaths from, for example, Bloat, Lightning Strike or Grass Tetany.

A full postmortem examination may reveal the specific clostridial bacteria responsible for causing death, so that an appropriate vaccination programme can be instigated.

In the absence of such information, vaccination using a multivalent clostridial vaccine that protects against the greatest number of clostridial diseases would make the most common sense.

Each year, clostridial diseases are a significant cause of mortality in Irish cattle. As reported in the AFBI/DAFM All-Island Disease Surveillance Report 2016, Blackleg is the most frequently diagnosed clostridial disease and the months of highest risk are August, September and October (DAFM, 2017).

Additionally, cases were most commonly recorded in younger cattle with 90% of cases recorded in animals less than 12 months of age.

The incidence of clostridial disease is reduced by vaccination, but the veterinary practitioners in the regional laboratories are frustrated by the number of animals presented for postmortem that have either not been vaccinated, were not vaccinated correctly or vaccinated without the required strains.

Clinical signs, including: sudden death; gross and microscopic findings on postmortem examination; gram stain of direct smears; and culture are used for diagnosis.

It is important not to diagnose clostridial disease based on suspicion of gross lesions or rapid decomposition. For example, pathology in a muscle mass or viscera could be dependent on postmortem movement or imbibition of blood or bruising and not necessarily a Blackleg / Enterotoxaemic lesion.

Treatment with large doses of penicillin or other broad-spectrum antibiotics may prevent bacterial multiplication, but will have no effect on toxins already produced.

Therefore, antibiotics will not be effective unless given early in disease. Wound exploration / curettage may also improve likelihood of recovery.

Remove the guesswork in trying to identify which clostridium is causing fatal disease by ensuring that cattle are protected with 10-in-one vaccines.

How to use Tribovax 10 in cattle:

A single death, depending on the age of the animal, can have a significant effect on farm productivity.

Clostridial vaccines are relatively inexpensive and if farmers are going to vaccinate for Blackleg, the selection of a vaccine giving the broadest protection makes most economical sense.

The death of one animal would – on average – cover the cost of 500 doses of the 10-in-one clostridial vaccine and this does not even include the cost or issues associated with disposal.