Analysis: Why your full Irish breakfast may not have any Irish pork in it

Next time you’re buying some rashers and sausages for your full Irish, you might be fooling yourself as they may not contain any Irish pork.

Ireland’s self-proclaimed number one sausage and rasher brand, Denny and its sister brand Galtee have been accused of failing Irish pig farmers by using imported pigmeat.

The IFA has said that Kerry Foods, whose parent company Kerry Group posted profits of €700m recently, of misleading consumers with its Galtee and Denny brands.

Pig farmers took to the gates of Kerry Foods in Shillelagh, Wicklow, last week, accusing the food giant of trading on its Irish brand names and failing Irish pig farmers.

He said that the latest Bord Bia results for the last quarter of 2015 show that only 22% of Galtee rashers have the Quality Assured logo, signifying Irish origin. 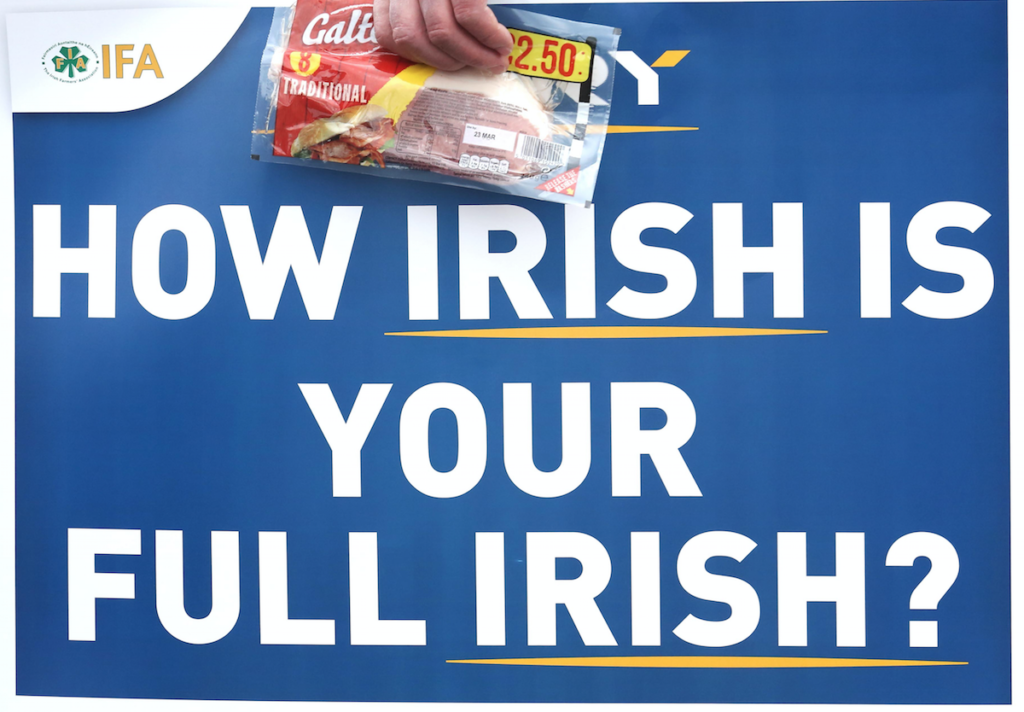 In response, Kerry Foods said that it is the largest purchaser and user of Irish pigmeat and that the use of imported pigmeat was not down to price.

However, Kerry’s spokesman said he could not disclose how much Irish pigmeat Kerry buys on an annual basis or for individual brands or how much non-Irish pigmeat it imports, as it was commercially sensitive information.

He said Kerry is not able to buy consistent volumes of the pigmeat it needs from Irish sources for some of its brands, 52 weeks of the year.

Volumes can double from one week to the next, he said, and it cannot always buy the meat it needs. “The product line has to be consistent.”

In relation to the Galtee and Denny ranges, he said the logo not appearing on the packaging does not necessarily mean the product inside is not Irish. However, he refused to say how much Irish pigmeat was used in the range on an annual basis, or how much imported pigmeat was used.

Kerry also says that it doesn’t state where the pork is from on its packaging, except that it’s sourced in the EU, due to the “limited amount of space available”.

Meanwhile, pig farmers say they are on their knees at the moment, with some estimating that they are losing €20/pig due to current prices.

IFA says pig prices are currently more than 20c/kg below the cost of production, meaning a loss to the average pig farmer of €5,000 per week.

The Minister for Agriculture Simon Coveney promised pig farmers a €3,000 one-of payment from Europe before Christmas, but pig farmers are yet to receive this money.

Pig farmer Michael Monagle described the payment as “abysmal” and said the industry is going through a “silent crisis”.

He pointed out that the pig industry in Ireland is the third most important sector after dairy and beef in terms of value and IFA figures show that it’s worth €470m to the agri-food sector.

According to one industry source, who asked not to be named, the level of imported pigmeat has increased significantly in the past two years.

He also said that the availability of Irish pigmeat is there for most products, but price is the real issue.

There is a 30-40c/kg difference in the price of Irish and imported bacon, he said. “There is a limited supply of certain products, but price is the main issue.”

Cullinan, who is a former Chairman of the IFA Pigs Committee, said the Bord Bia Quality Assurance logo gives consumers a guarantee that the product has a minimum percentage of pigmeat.

“The Quality Assurance logo means with sausages that there is at least 80% pigmeat in them.”

According to Cullinan, the issue of Kerry bringing in foreign pigmeat is fine – if it is labeled as such.

“The consumer does not have a clue what they are buying and top ‘Irish’ brands, often don’t contain what the consumer thinks they do – Irish pork.

“Also, when you go into your retailer you are getting quality assured and non-quality assured side by side on the shelf, which is misleading. This has been an issue for years.”

He says that, in the last 10 years, the sow herd has remained around 150,000 but there are fewer and fewer farmers involved in the industry and today’s numbers are around 300.

“The number of farmers has halved over the past 10 years.”

And he’s not confident for the future of the family run pig farm. “The family farm operation in pigs has been eroded, the day of 300 sows is nearly a thing of the past.”