Almost half of Member States want their own EU exit referendum

An Ipsos survey has revealed that 45% of respondents in EU countries  believe their own country should hold a referendum on its EU membership, regardless of the outcome of the Brexit referendum on June 23.

Of that 45%, about one third said they would vote for their nations to leave the EU.

The Ipsos survey was conducted in 14 nations, encompassing over 11,000 interviews between March 25th–April 8th 2016.


Five non-European countries were surveyed (Canada, USA, India, Australia and South Africa) as well as nine EU countries (UK, Germany, Poland, Hungary, Sweden, Spain, Belgium, France and Italy) which represent about  three-quarters of the EU’s population and 80% of its GDP.

Ireland was not part of the Ipsos survey, which found that 53% of respondents in the EU countries thought Britain will remain in in the EU, compared to 62% of the non-EU countries.

Eight EU nations (excluding UK) were asked, Do you think your own country should or should not hold a referendum on its European Union membership? 45% of respondents said ‘yes,’ of which 33% said they would vote for their nations to leave the EU if a referendum was held now.

Of those nations, a majority of respondents in Italy and France think their own country should hold a referendum on EU membership.

More than a third of respondents of Italy, France, Germany and Sweden said they would vote ‘out’ if a referendum on their country’s EU membership was held now.

Of the respondents in the eight EU countries (excluding UK), 48% agreed that if Britain left the EU, other countries would follow; with 18% disagreeing and 35% neither agreeing nor disagreeing.

Respondents were then asked, If Britain did vote to leave the European Union, do you think it would have a positive or negative impact, or make no difference, on the EU’s economy?

Respondents were also asked, if Britain leaves the European Union, do you think it would make the relationship between your country and Britain stronger, weaker, or make no difference? 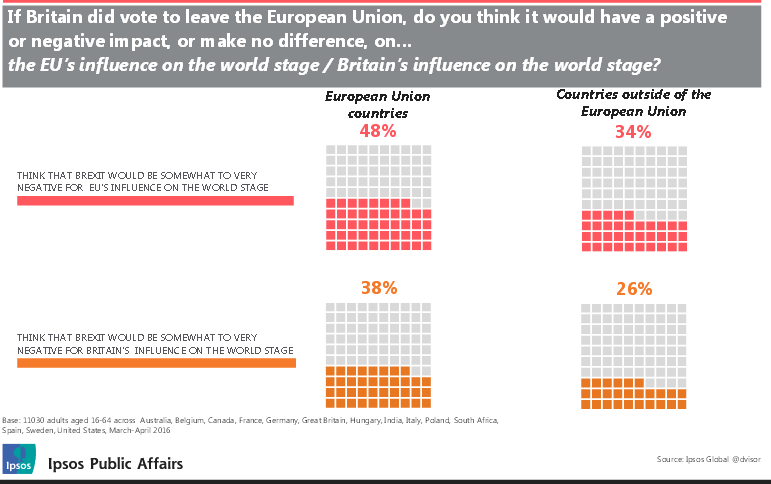