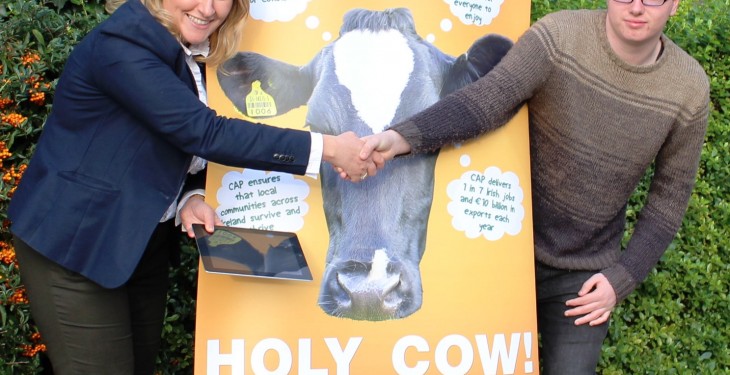 The competition was part of the ‘Follow the Farmer’ campaign, delivered by Agri Aware, the independent Irish agri-food educational body.

The campaign was designed to communicate the many benefits of the reformed Common Agricultural Policy (CAP) to the public and create an awareness and understanding about the importance of the reformed CAP in delivering safe, quality and traceable food that is affordable for consumers. The reformed CAP also ensures the sustainable management of our natural resources, and the development of our rural areas, it says.

As part of the ‘Follow the Farmer’ campaign billboards were placed in five major cities across Ireland – Dublin, Cork, Limerick, Waterford and Galway. The billboards contained a large picture of a cow, and the caption ‘Holy cow! CAP benefits everyone!’

Members of the public were encouraged to take photos of the billboards, and upload them to Agri Aware’s Facebook and Twitter.

Also as part of the ‘Follow the Farmer’ communication campaign, Agri Aware had exhibits at Bloom, Tullamore Agricultural Show and the National Ploughing Championships. Visitors to these exhibits were asked to take a selfie with the Holy Cow! sign,, and upload it to Facebook and Twitter, to be in with a chance to win an iPad.

Chief Executive of Agri Aware, Dr. Vanessa Woods said Agri Aware is communicating the reformed CAP to urban and rural people, across Ireland until next April. “The campaign encompasses numerous novel methods of communication to engage everyone in CAP. We are communicating this complex policy in a simple, effective way.”