The Minister for Agriculture, Food and the Marine, Michael Creed, has outlined that the eligibility for additional bonus payments on carcasses is set out by processors and retailers.

Following much recent debate over the conditions associated with the four movement rule of livestock between farms prior to slaughter, questions are now being pointed towards the 16 month and 30 month requirements under the Quality Payment System (QPS).

Earlier this week, Michael Fitzmaurice – independent TD for the Roscommon-Galway constituency – submitted a parliamentary question to Minister Creed asking if there is legislation in place “to govern” the 16 month and 30 month requirements under the QPS system.

In response, Minister Creed said: “A Quality Payment System (QPS) introducing differentiated payments in respect of certain grades of cattle at slaughter plants was introduced in 2009 by agreement between Meat Industry Ireland (MII) and the Irish Farmers’ Association (IFA).

My understanding is that any additional bonus payments and the conditions attached to qualification for such bonus payments are determined by processors and their retail customers.

“Such conditions may include age limits.

“These are commercial arrangements and my department has no role in their establishment,” he said.

Meanwhile, Minister Creed also provided an update on new market access for beef in China in response to the challenges posed by Brexit.

“My officials continue to liaise with their Chinese counterparts on a range of issues, including approval for additional plants under current beef access; and expanding beef access to include bone-in-beef.

“Progressing access for sheepmeat to the Chinese market will also be a priority for 2019,” he said. 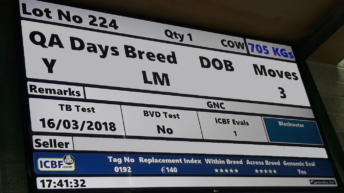