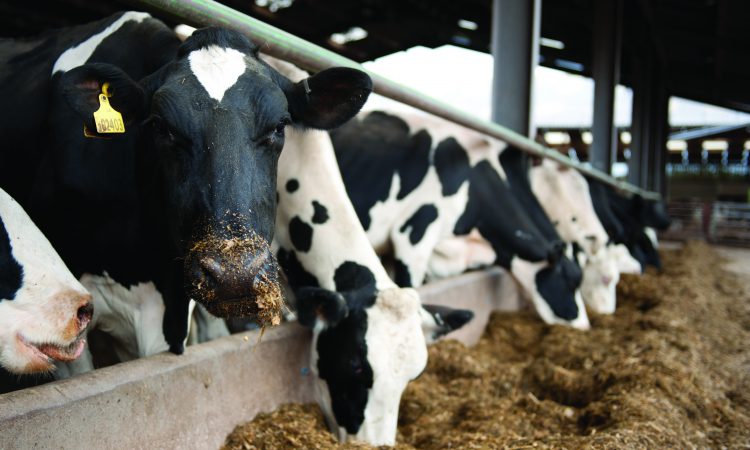 Feed and forage costs make up the largest single cost of milk production, therefore, controlling these expenses is essential to the profitability of any Irish dairy farm. In order to minimise feed costs per litre or kg of milk solids produced, optimising feed efficiency of the herd is critical.

With many spring-calving herds now starting to calve down, farmers should focus on easing the transition from the dry to lactating stage.

How well cows adapt to the many changes occurring during this crucial period can affect performance for the rest of the lactation, and ensuring that freshly calved cows get enough nutrition from an energy dense and well-balanced diet is critical in achieving this.

A study performed at the University of Nottingham’s Centre for Dairy Science Innovation (CDSI) has found that 10g/day of Actisaf increased energy-corrected milk yield by 2.8kg/day, or 5.5%. 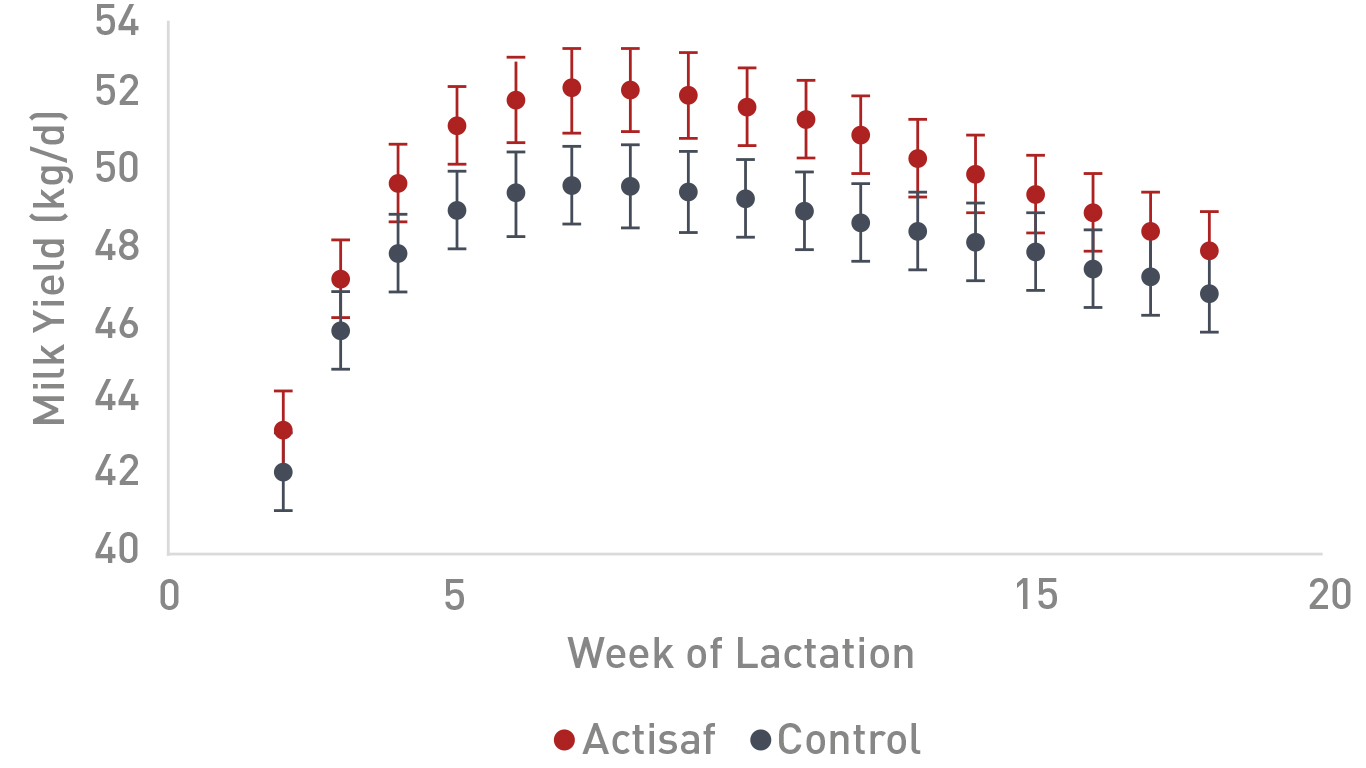 However, what these results tell us is that Actisaf is increasing milk yields through improved digestibility of fibre, unlocking more energy from the same amount of feed without jeopardising fertility or cow health. The potential impact of this new data on dairy farming businesses is really exciting.

“For the first one to two months post-calving, energy intake is limited, so optimising intakes is essential in order to close the natural energy gap that occurs during this.

“Maximising rumen function, feed digestion and the amount of energy that is released from feed within the rumen is also of paramount importance as this energy is critical for milk production and minimising body weight loss in early lactation.”

Phil Garnsworthy, Professor of Dairy Science at the University of Nottingham, oversaw the trial and stresses the importance of feed efficiency.

“As feed comprises 50-70% of costs on a dairy farm, anything you can do to minimise that expense without sacrificing yield is good for profitability and sustainability,” he says.

“Dairy cows are great at converting grass, which typically grows on land that is unsuitable for other crops, into a highly nutritious food. Improving the cow’s efficiency in doing so not only has implications for a farmer’s bottom line, but also for wider issues like the impact of farming on the environment and land utilisation.”

The trial was run using the centre’s high-performing Holstein-Friesian herd that averaged 12,500L/cow/year prior to the trial, approximately 1.5 times more milk than the UK national average.

The trial was a continuous design with two treatments applied to 25 cows per treatment from seven days after calving until 128 days in milk. Cows were paired pre-calving according to parity, predicted milk yield and live weight, then randomly allocated to either the control group or treatment group.

Throughout the trial, both groups were fed their normal diet of ad lib PMR and concentrate fed through the robot at the rate of 0.45kg/L above 30L/day milk yield. The PMR contained grass silage, maize silage, whole-crop silage, a soya:rape blend, molasses, protected fat and minerals. 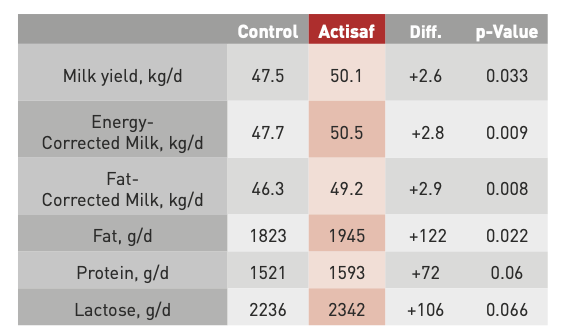 The treatment group was fed 10g/day of Actisaf in the PMR, with the control group receiving a placebo.

The results of the study showed that Actisaf significantly increased the yield of energy corrected milk with no associated lift in dry matter intake (DMI); thereby, significantly improving feed conversion efficiency by 5.5% on average.

This improvement in performance had no negative effects on body condition score (BCS), health, methane emissions or fertility, and ultimately resulted in a 5.5% reduction in carbon emissions per kg of energy corrected milk.

As DMI was not affected, the increase in milk yield can be attributed to increased digestibility, which in turn would effectively increase metabolisable energy (ME) supply to cows.

Additionally, the ability to increase milk production from forage through increased NDF digestibility demonstrates the role Actisaf has to play in helping cows reach their genetic potential, improving profitability and reducing the environmental impact of milk production.

Prof. Garnsworthy was intrigued by the outcome, especially considering Actisaf’s effect on such a high performing herd.

“Going into the trial, the cows were already highly efficient animals with highly efficient feeding systems in place. There aren’t many ways to improve on 50kg of milk per cow per day over the first 18 weeks of lactation,” he says.

“Here we were able to get 2.8kg of energy corrected milk more from a cow after feeding only 10g of product. These results show that Actisaf is doing exactly what it says it does – improving the digestibility of the diet and releasing more energy from feed for increased milk production.”

James summarises how Actisaf was able to achieve this: “When feeding dairy cows and other ruminants, it is important to remember that we are actually feeding the rumen microbes that break food down and convert it into a utilisable energy and protein source for the cow.

Actisaf’s primary function is to stimulate the growth of rumen bacteria that digest fibre, thereby releasing more energy from forage. Simultaneously, it is also encouraging the growth of bacteria that regulate rumen pH and minimise the build-up of lactic acid in the rumen, which causes acidosis or serious digestive upset if left to accumulate.

“This later group of bacteria convert lactic acid into propionic acid, a major source of glucose that is needed for the production of lactose, a key determinant of milk yield.”

In doing so, Actisaf increases milk solids and liquid yields, reduces incidences of acidosis and reduces the variability in performance associated with dietary changes, all benefits that are supported by a large library of peer reviewed trial work.

“This research backs up results we have seen on farm and getting the same outcome in a robust piece of scientific work is significant,” adds James.

Because of Actisaf’s ability to improve feed conversion, we believe it has an important role to play as the dairy industry moves toward even greater efficiency in a world where sustainability of production will be crucial.

He concludes” “Feeding Actisaf to cows in early lactation reduces the risk of acidosis and enhances digestion of feed, particularly silage and grass.

“This results in greater production of milk solids, higher peak milk yields and reduced body condition loss in early lactation. By unlocking more energy from your cows’ diet and significantly improving feed conversion efficiency, Actisaf can provide a return on investment of up to 8 to 1.”