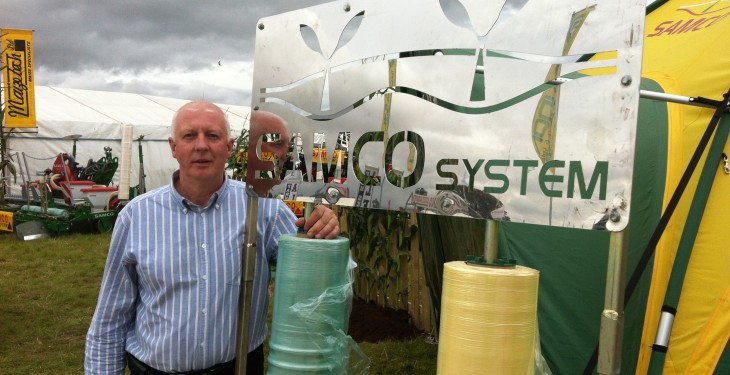 In Focus: AgriLand profiles Samco Agricultural Manufacturing, based in Adare and run by Samuel Shine who has recently been nominated for the Ernst & Young Entrepreneur of the Year Award.

When we envision inventors many imagine Einstein-like eccentrics akin to ‘Doc Brown’ from Back to the Future. However Samuel Shine, inventor and patent holder of the Samco 3-in-1 machine has his feel firmly planted on solid ground.

After taking over the family farm in 1978, Shine was operating as one of the country’s largest agricultural contractors. As time went on he became aware that preserving grass silage was becoming a huge issue for Irish farmers. “I began to research the possibility of growing alternative crops mainly forage maize. This in turn resulted in the contracting business digressing into sowing and harvesting maize for local farmers,” he said.

The Samco System was created and patented in 1996, is in short an ingenious system with three machines integrated into one.

The machine sows the maize seed, sprays the ground with a pre-emergence herbicide and covers the embedded seed with a degradable film. The film is proven to increase temperature, which ensures rapid plant growth throughout the season and also protects the young plant from early frost.  Giving the end-user sustainable, guaranteed higher yielding higher-energy food stuff or a cost efficient by-product for energy.

Since its formation the Samco System has grown from strength to strength and recently produced its 500th machine. According to Shine: “In 2012, 85 per cent of maize in Ireland was grown using the Samco System.”  The system is now used successfully in more than 20 countries, even in warmer climates where the film holds in moisture and prevents evaporation.

Shine remains strategically focused and is constantly evolving the product. In order to keep up with the increased pressure for efficient production the Samco Machine has evolved from a four-row machine, into both a two-row machine; one suitable for vegetables and a six-row version. Samco has since developed an eight row machine, which is now used in larger acreage markets such as Canada and Russia.

This year 90 per cent of production was exported to countries such as England, France, Germany, Holland, Belgium, Japan, Russia and Canada. There appears to be no stopping the Samco operation, which has now been embraced by territories in the US and Canada New higher output eight-row pull type Samco Machines were busy planting in Ontario, Canada and Wisconsin North, America in April 2013.

The breakthrough into the US also opens up the company to new emerging markets. Shine details the interesting projects taking place stateside.

“With so much volatility in today’s world oil market, many are seeking out alternative fuels to power cars. Ethanol a bi-product of maize is a very possible alternative fuel. Ethanol, or ethyl alcohol, is made by fermenting and distilling simple sugars from corn. It is often blended with gasoline to produce Gasasohol.” Ethanol-blended fuels account for 12 per cent and growing of all automotive fuels sold in the US, according to the American Renewable Fuels Association.

The strong business acumen required to operate profitably in the agricultural sphere is something that is becoming more evident. Indicative of this are the five top agri-businesses in Ireland that are finalists in the prestigious EY Entrepreneur of the Year awards for 2013. Shine was honoured at the nomination and commented: “Being nominated as a finalist in the EY has been a truly positive experience, in a way a fitting tribute to the entire Samco team after years of hard work. Being a finalist has raised our profile and enhanced our credibility worldwide.”

Samco Agricultural Manufacturing now has a staff of 30 full-time employees, three of which are Sam’s sons. The business continues to expand and it is now preparing for an increase of 30 per cent production in 2014.