A 15-year journey – From Co. Monaghan to milking 480 cows in New Zealand 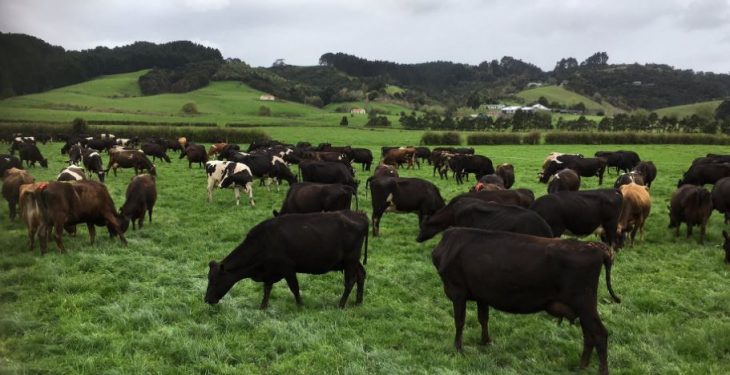 Hailing from Co. Monaghan, Olin Greenan is a shining example of what can be achieved in just 15 years of working in the New Zealand dairy industry.

Greenan and his wife Anna, along with their two young sons, are currently milking 480 cows under a share milking agreement in Clevedon, South Auckland, New Zealand.

“Picking it up from my father, I gained a huge passion for the land and that has always stuck.

“My brothers were successful at sport, but farming was my sport and I wanted to compete and always be the best,” he said.

The Co. Monaghan man told the 550 delegates at the Yara sponsored event that while studying from a degree in Agriculture in the UK, he realised that it would be challenging to make a living on the home farm.

“I finished my degree and went off to New Zealand for one year,” he said, adding that it is a fantastic country to gain experience in large scale dairy farming.

“I went out there and started as a farm assistant on a herd with 550 cows and spent two-and-a-half years there.

“I was coaxed back for another season with a free flight and that again is a sentiment to how they value their staff because they wanted me back.”

On his return to New Zealand, he was approached by a neighbouring farmer to take over the sole charge running of a 280 cow herd.

At this stage I was starting to see there was actually opportunities in New Zealand while being mindful of the limited opportunities that were available back in Co. Monaghan.

“I spent two years there and was approached by my previous boss to go back as a contract milker on the 550 cow farm that I first arrived on in New Zealand,” he said.

After his third year working on the Gordonton-based farm, he entered the New Zealand Dairy Industry Farm Manager of the Year Competition and won.

“That was a fantastic confidence builder for me. There is no doubt about it, it opened doors further down the line.”

During this stint, he explained that he had been able to build up stock numbers, including 60 cows and in-calf heifers, along with enough cash to put down a deposit on a 300 cow share milking herd in Eureka, which he entered in 2009.

“We had some very good years there and we were very very disciplined.

“We paid down a lot of debt which left us in a better position for our current farm of 480 cows in a share milking arrangement in South Auckland.”

Presently, he said, they are operating a low-cost pasture-first dairy farm, which has stood to them during a period of low milk prices.

A longing to own land

Greenan admitted that his long-term goal would be to own his own farm in New Zealand, but he said that it will be difficult given inflated land prices there.

“With over inflated land prices it is quite difficult to make the figures add up,” he said, but this longing comes as the couple want to provide security for their two young boys, Jack and Noah.

“With share milking you are sort of living a nomadic lifestyle, we can’t actually call somewhere home just yet,” he said.

Managing risk and sticking with your system

Greenan said there is certain risks and farmers have to identify the difference between external and internal risks.

“The list is endless. There is no point and studying it because you have no control over it,” he said.

He added that farmers should manage the risks that they can control, such as managing diseases and the cost of production.

Managing costs and keeping them as low as possible is central to his share milking business, he added.

“We focus on pasture production. In the high years, this allows us to use surplus cash during high price years. In the low-price years, in one sense, we are the last man standing at the bus stop.”

Farmers have got to find their own system and stick to it, he said, and don’t worry about what anyone else is doing.

“Don’t be tempted by the latest fads, ignoring these will give you the longevity to carry on through with your own business plan,” he said.

He also said that he has seen significant changes in the New Zealand dairy industry over the past 15 years.

“Improved commodity prices since the mid 2000’s has led to a number of farmers pursuing additional production.

“Farmers started to become more production orientated, losing sight of the many fundamentals that had helped them become so resilient in years gone by.”

Farmers slowly started to drift towards higher input systems, he said, with many of these systems demanding capital investments in feeding equipment and facilities.

In the space of 10 years, farm working expenses and debt servicing requirements increased leading to an increase in the need for a higher breakeven milk price.

“The past two seasons of reduced milk prices has put a lot of pressure on a number of farms and in some cases farmers had to refinance to keep going, only adding to their problems.

“Despite the temptations of increasing milk prices, we stuck to our guns and never drifted away from our low input system.

“When the downturn came we never had to cut anything significant out of inputs and still achieved the same physical results,” he said.

“Going forward, we have a model that I know will work for farm ownership with the upside of generating surplus cash in high milk price years.”