7 fertiliser spreaders and Fendt tractors in one field…in Co. Offaly 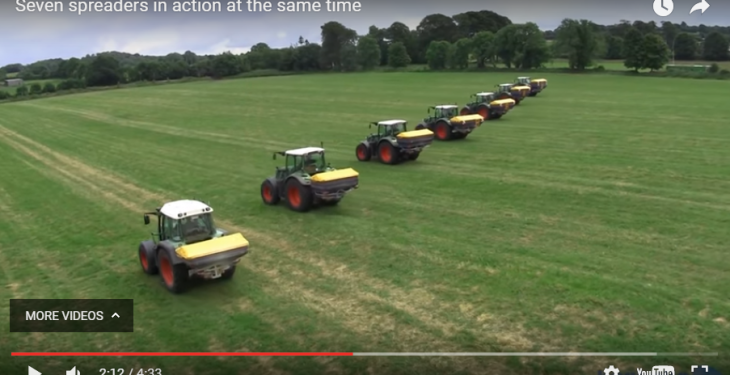 The sessions will include information on fertiliser spreader calibration and set-up, as well as guidance on the use of GPS systems, section control and tablet-based in-cab controllers.

The use and benefits of the latest ‘on-the-move’ weighing technology will also feature.

Atkins is the main distributor for Bredal and Bogballe – both of which are based in Denmark and are well known to a wide swath of farmers and contractors right across the country.

The prospect of this weekend’s in-depth information sessions reminded us of an impressive ‘tour de force’, whereby Atkins showcased a plethora of models from Bogballe’s range – at a demonstration close to Birr, Co. Offaly.

The video below actually dates from 2014, but the machines featured are still ‘current’ today.

Commenting on the video, Atkins’ Product Specialist for fertiliser spreaders, Trevor Richardson, explained: “We wanted to showcase the whole range; the video gives farmers and contractors an overview of what Bogballe has to offer Irish buyers”.

Bogballe is best known for its twin-disc, mounted fertiliser spreaders. Competing against the likes of Amazone, Vicon, Rauch and Sulky, run-of-the-mill models go to all sorts of customers.

Bredal is most readily-associated with its range of high-capacity trailed (bulk) fertiliser spreaders. It’s also a big player in the lime spreading sphere.

K Series fertiliser spreaders are used by significant numbers of agri-merchants and contractors here. There are eight different models in the line-up, with capacities from 2,500L up to 19,400L.

The K40, K45, K65 and K85 are single-axle machines; the K105 and K115 are normally built on a single axle but can optionally be ordered as tandem-axle units. The larger K135 and K165 come only as tandem-axle spreaders.

Electronic control of the spreaders is possible via either the TeeJet 500 computer or via ISOBUS.

Just a few weeks ago, Atkins produced this additional video (below) showcasing what Bredal has to offer. Again, the machines were filmed working close to Birr, Co. Offaly.

Atkins’ own company history dates back to 1878, when John Atkins met Joseph Wolfe and founded an agricultural merchants at 49 South Mall, Cork.

A second outlet was opened in Cork city seven years later. A few years after that, Atkins acquired a nearby competitor – McKenzies.

Just before the turn of the century, the legal entity – John Atkins & Co. Ltd – was formed. It is now one of Ireland’s oldest surviving companies.

Another outlet was opened in 1900. A period of retrenchment followed, with the onset of the first world war, the war of independence and the civil war.

The company began to expand again during the 1920s. Atkins bought out Southern Seed Company and opened a further outlet in Dingle, Co. Kerry.

The 1930s and 1940s saw the onset of the ‘economic war’ and the second world war; which the company managed to survive.

Fast forward to the 1960s, when the farm machinery business relocated from Patrick’s Quay in Cork City to Carrigrohane Road on the outskirts. This marked the commencement of the importation of several lines of machinery from Europe, including Bredal and Bogballe.

In the 1970s, Ireland joined the EEC, which brought about greater demand for machinery. During that decade and the 1980s, additional branches at Bandon, Fermoy, Midleton were added – to consolidate the company’s strength in the farm machinery sector in Co. Cork.

Today, the business is owned by the Wolfe family, who bought out the remaining Atkins family shareholders back in 1996. 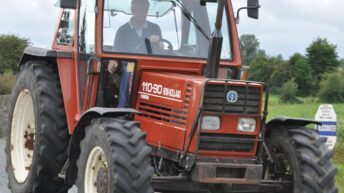