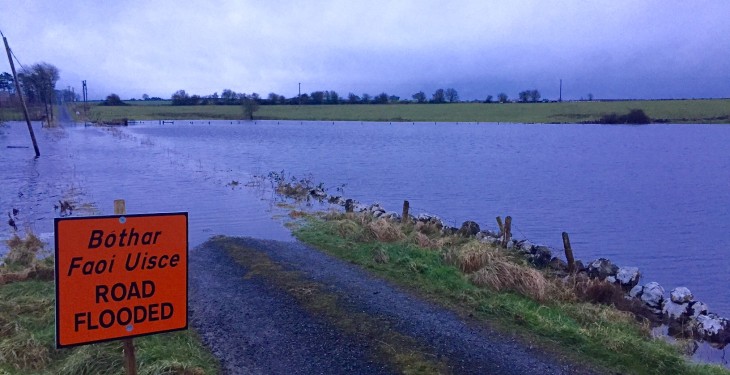 A total of 50 new flood relief schemes have been allocated some €257 million as part of a 10-year, €1 billion programme of investment in flood relief measures.

The news was confirmed today in Athlone by the Minister of State for the Office of Public Works and Flood Relief, Kevin ‘Boxer’ Moran; the minister made the announcement in the presence of An Taoiseach, Leo Varadkar.

Commenting on the news, Minister Moran said: “This Government has provided €1 billion for investment in flood risk management measures over the coming decade.

“The Flood Risk Management Plans published today allow the Government to build on significant investment on flood defence schemes – since 1995 – which has delivered 42 major flood relief schemes around the country.

These schemes successfully provide protection to 9,500 properties and the economic benefit to the state in damage and losses avoided are estimated at €1.9 billion.

“There are currently also nine major schemes under construction and a further 24 at design/development which together will provide protection to a further 12,000 properties,” he said.

As part of today’s announcement, Minister Moran made €14 million available to 19 local authorities to lead on the delivery of 31 of the 50 new schemes included in the first phase of funding, each estimated to cost less than €1 million.

Delighted to launch in the presence of An Taoiseach @campaignforleo a ten-year programme of €1bn nvestment in flood relief measures including a first tranche of €257 million in funding for 50 new flood relief schemes to proceed to detailed design and construction. @opwireland pic.twitter.com/e9kxiklYxv

Meanwhile, An Taoiseach Leo Varadkar stressed that flooding can have a devastating impact on families, communities and businesses.

Speaking at the launch, he said: “If your home or business is badly damaged or destroyed by flooding, the emotional and financial impact is immense.

It also has a huge cost to the economy. For all of these reasons, the Government will spend €1 billion on flood relief and prevention over the next decade under Project Ireland 2040, our national development plan.

“Today we are announcing 118 new flood relief schemes, of which 50 will be advanced in the initial phase to detailed design and construction with investment of more than €250 million.” 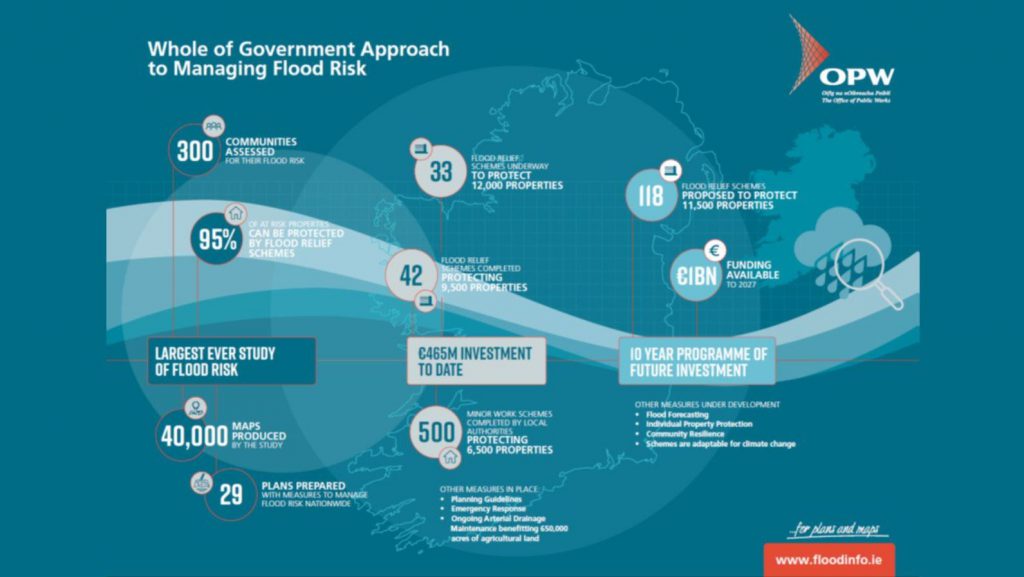 Details regarding which schemes are being allocated funding are available on the Office of Public Works’ (OPW) website.

However, the Government needs to address issues with flood insurance to ensure that homes and businesses in areas where flood defences have been built by the OPW are fully covered, Fianna Fail’s Eugene Murphy said.

Reacting to today’s announcement, he said: “We have been waiting over seven years for the publication of these Flood Risk Management Plans, and in that time hundreds of homes and businesses have been devastated by a series of weather events.

“Minister Moran is committing €1 billion to this 10-year plan, which is welcome; however I have serious concerns about the delivery of these projects given the huge underspend on previous flood defence schemes.

One of the biggest issues facing home and business owners in flood risk areas is the fact that insurance companies are refusing to provide cover, even when flood defences have been built.

“Unless this issue is addressed, there will be no comfort for those who have already been affected or those at risk of flooding,” he said.

‘Covering a fraction of the problem’

Meanwhile, today’s announcement was welcomed by Brokers Ireland – the leading representative body for insurance brokers in the country.

But it added that this development still amounts to covering a fraction of the problem, whereby an estimated 40,000 to 50,000 homes and businesses are unable to get flood insurance cover.

Brian McNelis, director of general insurance services at Brokers Ireland, outlined that it looks like 19 schemes covering about 7,300 properties will be prioritised by the OPW – with a further 31 small schemes to be progressed by local authorities.

“That is a welcome step. It would also be important that the insurance industry would work very closely with the Government to make sure that, where flood defence works have been undertaken, insurance cover would be restored without delay – and I welcome Minister Boxer Moran’s commitment to hold detailed discussions with insurance companies,” he said.