One third of Irish consumers (33%) do their weekly ‘main shop’ at Tesco, according to the latest Where We Shop report from Checkout Magazine and Ignite Research.

The report, which measured the shopping habits of 1,000 Irish consumers across the ‘big five’ grocers, found that 23% of respondents do their ‘main shop’ at Aldi, followed by 16% at ‘Lidl’, 15% at Dunnes Stores, and 11% at Supervalu.

There has been little change in the percentage shopping at each store since last year, the research shows.

Some 34% of female shoppers are more likely to choose Tesco for their main shop than male shoppers (31%), it found.

The research found that while there is a sizeable gap between the percentage of male shoppers (19%) and female shoppers (11%) that primarily use Dunnes.

Having a ‘wide range’ (68%), convenience of location (65%) and having a strong customer loyalty programme (50%) were some of the reasons shoppers gave for choosing Tesco as their main shopping destination, the report found.

When it came to Aldi and Lidl, shoppers cited value for money as the key reason behind shopping in the stores, with 86% of Aldi shoppers and 81% of Lidl shoppers citing their respective stores as ‘the cheapest’, it found. 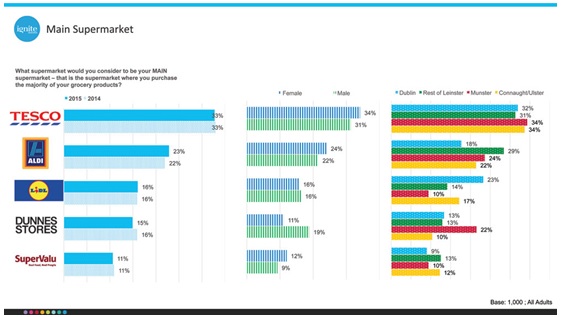 Conor Hughes, Client Director at Ignite Research, said that it’s surprising that little has changed overall when it comes to this increasingly more competitive landscape where consumers are constantly comparing from retailer to retailer.

“Today it’s a case that stores have to work very hard to differentiate themselves from the competition and this is more evident when we look at value for money perceptions.

“Here, the discounters have fallen back, which one would have to assume is as a result of deals being offered by all the major retailers,” he said.

In addition, Supervalu is seen as the retailer that is the ‘best at promoting Irish’ products, by 39% of respondents, up from 33% last year, the report found.

In contrast, it found that the percentage that deemed Dunnes to be the best at promoting Irish fell to 17% (down from 23% last year).

Stephen Wynne-Jones, Editor at Checkout magazine, said that this years Where We Shop report indicates that when it comes to our shopping habits, Irish consumers really are creatures of habit.

“While value for money is still a key decision driver for most households, the most successful stores marry this with range, location, access, friendly staff and quality produce – factors that can have a huge influence on where consumers decide to shop,” he said.