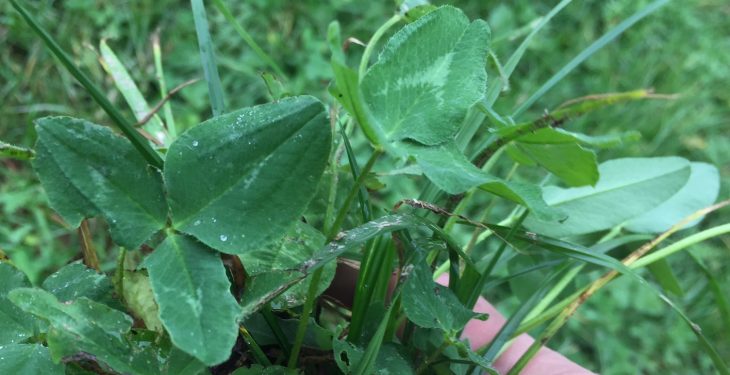 Red clover silage swards are capable of producing 30 bales of silage per acre under top management conditions, according to Teagasc’s Elaine Leavy.

Leavy, a Teagasc Organic Specialist, highlighted the benefits of red clover/perennial ryegrass silage at an organic farm walk in Co. Offaly on Wednesday.

She said that this level of production is achievable under a three-cut silage system, while the clover content of the sward is also capable of fixing 160 units on Nitrogen per hectare per year.

However, said that this is only capable under top management conditions.

Work carried out by Teagasc shows that red clover/perennial ryegrass swards perform to their best at a soil pH of 6.0-6.5 and Phosphorous (P) and Potassium (K) indexes of three.

Leavy also said the the seeding rates varies, with many farmers opting for a 70:30 perennial ryegrass: red clover mix, but she said that 50:50 mixtures generally work best.

The feeding value of red clover silage is very good, she said, as it out performs conventional grass silage in terms of protein content.

And given the Nitrogen-fixing benefits and the protein level of silage, Leavy said this type of sward fits in well to an organic farming system as it can be used as a break crop on farm.

Red clover/perennial ryegrass swards are often sown as a short term crop for about four years and Leavy recommends leaving five-to-seven years between such swards to prevent parasite eel infestations.

Within an organic rotation this sward can be sown in the spring time, possibly following on from a forage crop, with a view to sowing the field with a tillage or permanent pasture crop four years later.