An Garda Síochána is currently at the scene of a two-vehicle road traffic collision on the N4, outside Edgeworthstown, Co. Longford.

According to a statement from the Garda press office, the collision involved two trucks.

A young man in his twenties has been taken to the Midland Regional Hospital, Mullingar, Co. Westmeath, as a result of the collision however, his injuries are being described as non-life threatening.

The picture below shows the damage caused to the other truck involved in the collision: 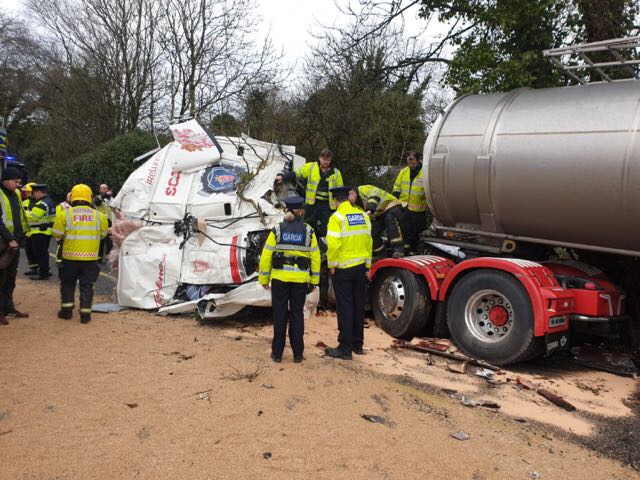 It is understood one truck was carrying grain and the other truck involved in collision was carrying molasses.

The contents of the truck are said to have spilled out on the road and it is understood that efforts are underway to clean up the spillage.

According to AA Roadwatch the road is expected to remain closed on the Mullingar side of Edgeworthstown – near Edgeworthstown train station – until later this afternoon.

Local diversions are in place and traffic is being described as “busy” in both directions.

In a separate incident, a driver towing a trailer containing two bulls has been issued a court summons after being stopped by Gardaí in the south of the country recently.

Upon inspection it turns out the driver had failed to attach a secondary coupling [breakaway cable] to the trailer which was loaded with two bulls. It also transpired that the driver didn’t hold a trailer licence.